With the multitude of films that are released every year, sometimes one just falls through the cracks. Today, we’re reviewing Jon Watts’ Clown just in case you missed it…

Today’s ICYMI Review is a little bit different than usual. Writer/director Jon Watts’ film, Clown, received video-on-demand and limited theater releases on June 17th but it actually came out in other countries well before that. The earliest release was in Italy back in 2014 and it premiered in a number of other countries in 2015. In contrast, the first North American trailer was posted on this site just last month.

The film stems from a fake trailer released on YouTube in 2010. It stated that the film was “from horror master Eli Roth” which, at the time, was false. However, after seeing said trailer, Roth did actually sign on as producer. With Clown, the filmmakers create a tense mood by using creepy scenarios, bloody effects, and childhood fears to shock viewers.

The plot is centered around a real estate agent named Kent (Andy Powers). After a birthday clown cancels an appearance at a party for his son, Jack (Christian Distefano), Kent finds an old clown outfit in the basement of a house he’s selling. He puts the costume on and does the birthday party himself. Following the party, he is unable to take the costume off and he gradually feels it becoming part of him. From there, he acquires a hunger for children and, of course, horror ensues.

It must be said that this film wouldn’t be half as enjoyable as it is without Powers as the lead. Normally cast in bit roles on television shows, Powers is fantastic as Kent. He is likable from the start and is able to successfully shift his entire demeanor into a disturbing and emotionless performance as the evil clown. His poignant transformation throughout the film is just as significant as his physical one and it’s not often a low budget horror film succeeds in this way. The film also stars Laura Allen as Kent’s wife and Peter Stormare as Herbert Karlsson; a man whose past coincides with the costume. 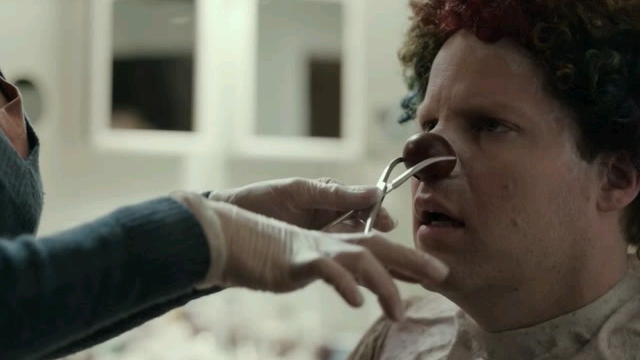 Admittedly, the overall story is not all that original. The first thing that may come to mind is the R.L. Stine Goosebumps story, The Haunted Mask in which a young girl buys a Halloween mask that gets harder to take off each time she wears it. Overall, it’s the same premise as Clown even though the latter is much more gruesome and adult oriented. Also, the costume attaches itself to Kent immediately whereas the mask becomes more difficult to remove the longer it’s worn. Clown also feels slightly reminiscent to a Tales from the Darkside type of story in which the idea is somewhat campy and ridiculous yet still horrifying in the end.

As you may have guessed, though, Clown is not a perfect film by any means. The film could’ve benefited from better pacing. The first 45 minutes or so are fantastic and, as a viewer, you’re fully absorbed in the story. Watching Kent go about his daily life while being trapped in the costume is actually quite uncomfortable to watch and even moreso when he’s trying to forcefully remove it. As his facial features change, you truly feel sorry for him while he loses self control to the evil within the costume. 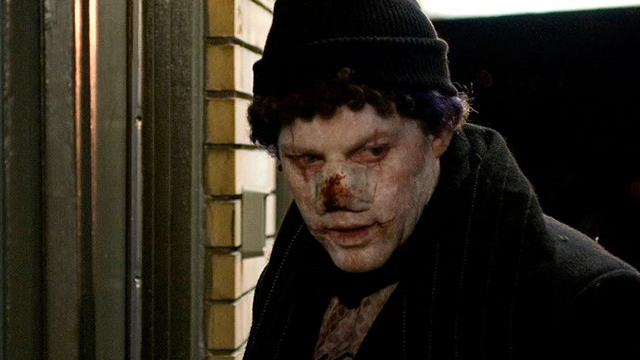 By the final act of the film, there is a shift from primarily Kent’s perspective to his wife, Meg’s. After spending the entire film with the former, it’s an odd, yet somewhat understandable transition. On top of that, though, the ending drags a little and it’s not necessarily what you’d expect. In a lot of instances, it’s difficult to understand Meg’s thought process when sometimes she seems to know what she’s doing and then other times she has no clue. While these aren’t huge concerns, the screenplay could’ve simply used some cleaning up.

Although the trailer for the film did look interesting, Clown was surprisingly good overall. As everyone knows, horror trailers often far exceed the quality of the final product. In this case, the final product was as advertised. It’s an ugly and gruesome little tale that makes you cringe while never being overly silly. If you have the chance to see the film, it’s definitely a recommendation for horror junkies. Clown isn’t exceedingly good at any one thing but it should satiate any horror fan’s bloodlust.