With all of the cookie cutter horror films that come out yearly and the endless supply of unnecessary sequels, it’s refreshing when one comes out of nowhere and exceeds expectations.

2013 saw the release of The Purge; a home invasion/science fiction thriller film that actually had a unique premise. The ideas behind The Purge films are based on current issues such as crime, poverty, and social status. Before you’re scared away by the term “science fiction,” this only refers to the film being set in the relatively near future and having differing social and political connotations than the world today.

Before delving into The Purge series, it’s interesting to note that all three films have been written and directed by James DeMonaco. In the horror genre, this is astounding. If you look at other franchises, very rarely does the same person direct more than one installment. It’s even more rare when said director writes the screenplays as well. With Universal Pictures and Platinum Dunes giving DeMonaco free reign, it allows the series a single artistic vision.

When it comes to filmmaking, nothing is more important than consistency and, thus far, The Purge has been just that: consistent. The same disclaimer message is endorsed in all three films: the annual Purge is a yearly tradition that occurs on March 21st. It lasts from 7 PM to 7 AM and all crimes, including murder, are legal during that time period. The Purge is used as a type of release for citizens and is also a means to eradicate the poor, homeless, elderly, etc. Anyone who isn’t a contributor to society may be deemed expendable by the Purge. As opposed to following a continuing storyline of one individual or family, The Purge is more of an anthology series. Each film introduces new characters and follows them throughout their respective experiences.

The first film spotlights the Sandin family in 2022. The patriarch, James (Ethan Hawke), is responsible for manufacturing and selling home security systems used during Purge Night. Following the lockdown of their house, his son, Charlie (Max Burkholder), sees a Stranger (Edwin Hodge) on the security cameras. He disables the system and allows the man to take refuge in their home. From here, James attempts to hunt down the Stranger within the house and return him to a group of Purge participants led by the Polite Stranger (Rhys Wakefield). The Polite Stranger threatens violence upon the Sandin family if they don’t deliver. Lena Headey and Adelaide Kane also star as James’ wife and daughter respectively. 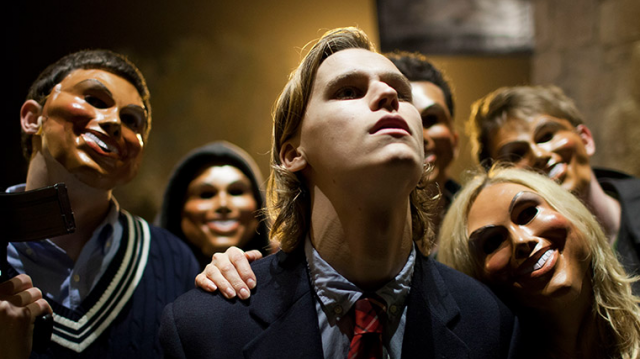 The most intriguing thing about The Purge is that it really plays with the idea of humanity. Seemingly normal people go to great lengths to cleanse their own spirit by murdering others. On the other hand, the Sandin’s struggle with their choice of whether to basically serve a potentially innocent man his death warrant or not. While it’s certainly an extreme scenario, the “us or them” mentality isn’t foreign. It’s an every day ideal that people experience in countless ways. We live in a dog-eat-dog world and The Purge simply takes it to its absolute limit.

While it’s a thoughtful, well made horror film, it is a bit hamstrung by being confined to one location. Home invasion films have been done frequently in the past and this one is nothing new. It’s the sociological undertones that make The Purge an intriguing watch. That being said, the film has some suspenseful and action packed moments. The character motivations could’ve been a bit more fleshed out, though.

With The Purge: Anarchy, the characters are given an entire city to work with. Also, the political influences on the series are much more prevalent here. The film joins a grieving father, a poverty-stricken mother and daughter, and a young couple in a hostile Los Angeles. The threats in this film are a militarized group traversing the city in semis while mowing down destitute bystanders and a mysterious gang of individuals in masks kidnapping people. As the protagonists navigate the city for safety, they must frequently dodge both groups to survive.

This film does everything that’s expected of a good sequel. It progresses the story and it just feels bigger than its predecessor. While the protagonists in this film are different than in the first movie, it doesn’t feel like the characters are the overall focus in this franchise. The main story is of Purge Night itself. In the first film, we are given the reasons and success of the yearly tradition. In this one, we learn of the problems and political agenda behind it. In addition, there is another anti-Purge group, led by Carmelo (Michael Kenneth Williams), that fights against the villainous factions. As the Anarchy subtitle suggests, no one is safe from the Purge, rich or poor.

On July 1st, The Purge: Election Year will be released in theaters nationwide. Like Anarchy, the Election Year subtitle further enforces the political significance to the yearly event. There are a few major differences in this film, though. First of all, the grieving father, played by Frank Grillo, returns for Election Year. Since the last film, he has become the head of security for Senator Charlene Roan (Elizabeth Mitchell). Senator Roan has her sights set on the presidency and also vows to eliminate the annual Purge.

Of course, we can expect the usual from the series in Election Year but with every new installment comes a bigger piece of the overarching story. At this point, it’s known who benefits most from the Purge (not the poor). The question now is, “who is on top calling all of the shots and why?” While it was originally installed to eliminate crime year-round, the Purge has done its job and people have actually ceased to participate. What’s the purpose of a Purge instituted by the government? 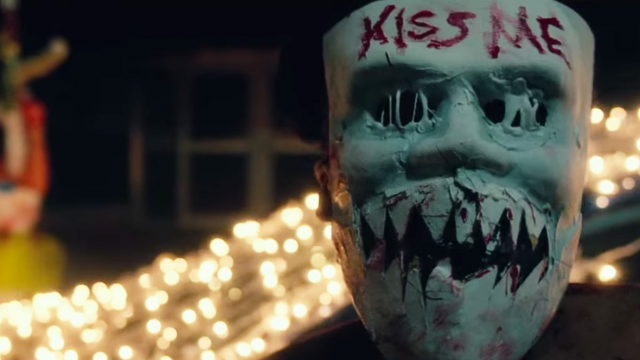 The level of intrigue for Election Year is certainly there. There are a lot of unanswered questions left by both of the previous films and hopefully this new film will shed some light on them. At this point, it’s unknown as to whether this will be the last film in the series. From speculation alone, it seems as if it could be. Where can the plot go beyond a presidential candidate?

The best thing about these films is the level of realism they convey. There aren’t any monsters, supernatural events, or demonic possessions. These films are about people killing people and the government endorsing it. In the real world, there should be no greater fear than that. At its best, The Purge series is a frightening look at America gone wrong. It’s the perfect type of horror film for the current world we live in and has been one of the most consistently intriguing horror franchises of the 2010’s.