With the multitude of films that are released every year, sometimes one just falls through the cracks. Today, we’re reviewing David Robert Mitchell’s It Follows just in case you missed it…

The plot focuses on a girl named Jay, played by Maika Monroe. After going on a date and having sex with a guy named Hugh (Jake Weary), she is quasi-abducted by him. Hugh warns her of a shapeshifting entity that will follow and attempt to kill her after he passed it to her via intercourse. It takes on human forms, sometimes loved ones, to confuse and torment its prey. While Jay does seem to believe him, it’s not until she actually sees her pursuer away from Hugh that her fear intensifies. Soon, Jay’s only ways to survive are to trust her sister and friends, Kelly (Lili Sepe), Paul (Keir Gilchrist), Yara (Olivia Luccardi), and Greg (Daniel Zovatto), or pass the “disease” onto someone else.

In all honesty, it’s hard to believe that this is only Mitchell’s second feature length film. According to an interview with Rolling Stone, Mitchell came up with the concept for the film thanks to a dream he had as a young boy. He claims he was on a playground with friends as a small child continuously walked towards him. He had other recurring dreams about the encounter but in different locations. Obviously, the issue of sexual transmission came at a later date. Regardless, the idea for the film is oddly intriguing and is used to perfection. 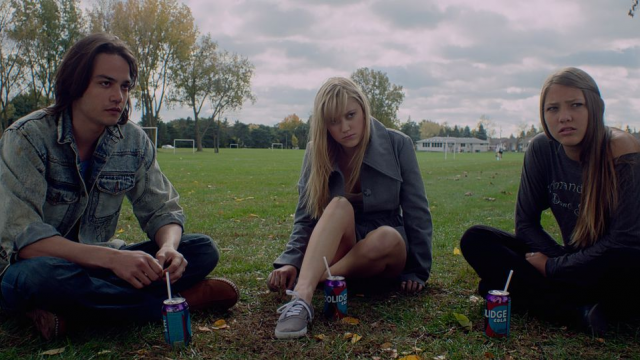 While the premise of the film is great, the cast is just as good. It consists of mostly young unknowns but they’re all convincing in their respective roles and are distinguishable from one another. While the sisterly connection between Jay and Kelly could be a bit stronger, there is a closeness within the group that radiates off the screen. Jay is the only character in the group capable of seeing the entity yet her friends support her every step of the way.

Possibly the best thing about It Follows is the camera itself. There are so many unique shots and techniques used that it’s an absolute joy to watch. There are some amazing mounted camera, panning, and wide angle shots that make the world of the film seem huge. Even when characters are confined, the wide angles make locations feel expansive. Every shot has so much to look at whether they’re indoors or outdoors. The shooting basically gives the illusion that the characters can escape almost anywhere yet the entity continues to find them. 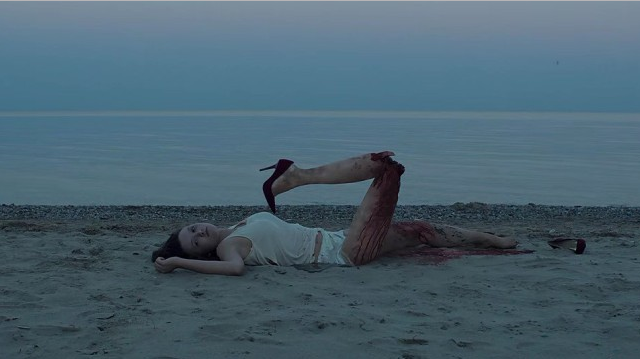 Another superb aspect of the film is the music. For fans of 1980’s horror films, get excited. It Follows has a ton of synthesizer and deep bass tones to enhance the horror onscreen. Most of the film is relatively quiet and subdued aurally but as soon as the entity appears, it gets loud. The score was composed by Rich Vreeland AKA Disasterpeace. He does a great job as the soundtrack isn’t overly produced and has a grittiness to it. The first time that Jay is getting stalked alone, the music sounds almost like something out of 1981’s Halloween II. Essentially, the score is just as impressive as the rest of the film itself.

If there’s one negative of It Follows, it’s the ending. It’s not that it’s disappointing but the plan to meet the entity head on is somewhat confusing. Without ruining anything, the plan seems a bit intricate, not to mention dangerous, for how the friends handle the villain. Obviously, it’s not a backbreaking problem for a film that has so much going for it but it does beg questioning.

So what’s the deeper meaning of It Follows? Is it about mortality? Is it spreading awareness of sexually transmitted diseases? Maybe it’s just a fun concept that David Robert Mitchell could do a lot with. There are many instances of all of these things in the film especially with some of the dialogue. Ultimately, though, It Follows is just a great horror movie. It’s pretty to look at, the concept and execution are entertaining as can be, and its meaning is up for debate. It doesn’t hold your hand and explain every little thing to you. David Robert Mitchell crafted an exemplary work of horror in a day and age when they’re getting harder to come by. It Follows is an absolute must-see.