Earlier this week, we posted an In Case You Missed It Review on Richard Donner’s The Omen. In terms of today’s audiences, it seems as if that film is relatively forgotten despite its deserved classic status. If a superb film like The Omen can be so overlooked, is there a horror film that tends to be universally praised that’s, perhaps, overrated? While being a fun and entertaining horror flick, Tobe Hooper’s 1982 film, Poltergeist, may just fit that description.

Overall, the film had a very strange production. While working on E.T. the Extra Terrestrial, legendary director Steven Spielberg had a clause in his contract from Universal Studios in which he was unable to direct any other films during that film’s production. Originally, Spielberg had the idea of making a horror themed sequel to Close Encounters of the Third Kind. However, due to the clause, Spielberg selected Tobe Hooper, of The Texas Chain Saw Massacre fame, to direct in his stead. Hooper wasn’t keen on the science fiction elements and optioned a ghost story instead. Thus, Poltergeist was born. Since its release in 1982, only a week apart from E.T., the film has spawned two direct sequels as well as a 2015 remake.

The plot centers around the Freeling family. They live in a planned community where the father, Steven (Craig T. Nelson), is a real estate developer. His wife, Diane (JoBeth Williams), is a stay-at-home mom raising the couple’s three children, Dana (Dominique Dunne), Robbie (Oliver Robins), and Carol Anne (Heather O’Rourke). One night, young Carol Anne begins talking to the family’s staticky television set from which a ghostly hand emerges. An earthquake rattles the house and Carol Anne announces, “They’re here.” From this point, a number of strange occurrences begin such as furniture moving and silverware bending. Eventually, the family is attacked by ghosts and Carol Anne is kidnapped by them. The Freelings reach out to parapsychologists and psychic medium Tangina Barrons (Zelda Rubinstein) to help them retrieve their daughter.

Now, before delving more into the film, it should be stated that the film’s cult following is understandable. For what it is, it’s a fun and mostly family friendly horror experience. Yet, its iconic status is questionable at best. The film was nominated for three Academy Awards for Best Original Score, Best Sound Effects Editing, and Best Visual Effects. However, Spielberg’s E.T. took home the prize in those three categories. In addition, Poltergeist was selected by The New York Times for inclusion on its The Best 1000 Movies Ever Made list and appeared on AFI’s 100 Years… 100 Thrills list as well. More generally speaking, the film is regarded as a classic in the horror genre and one of the best films of 1982 among many fans. 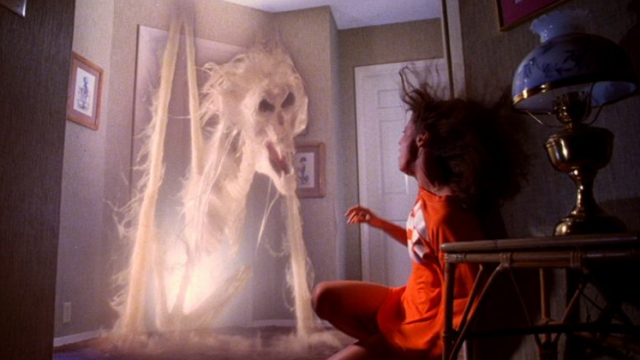 Now, with all of that out of the way, there are many issues that plague Poltergeist. While the film nabbed a nomination for a Best Visual Effects Oscar, the effects don’t hold up well today. The practical effects such as the moving furniture and the bloodthirsty tree are done well and look convincing. Though, the film’s CGI leaves a lot to be desired. Scenes like the one pictured above and the objects flying around the children’s room look cartoony and awkward. Understandably, this was 1982 and the technology wasn’t quite there as it is today. Yet, when you stack this up against something like Star Wars, it’s far inferior.

Another thing that’s surprisingly bad about Poltergeist is its editing. At times, it’s extremely choppy with distracting jump cuts. For a Spielberg production, it’s surprising that the film was even released in its current form. Specifically, there’s a scene where characters are talking and the film cuts in the middle of their conversation to a different scene altogether. Then, later in the film, Craig T. Nelson’s Steven is talking to his boss near a cemetery. The camera is focused on them and then cuts to a shot that’s pulled back a little bit farther from the characters. These are day one editing mistakes and it’s unfathomable that some of these weren’t cleaned up. Similarly, Jerry Goldsmith’s score is quite schizophrenic also. At times, there’s a whimsical, family friendly tune which is then countered with an actual horror score. 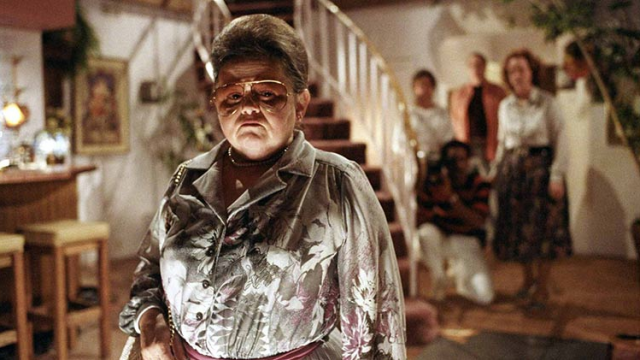 For the most part, Poltergeist feels like the product of two separate filmmakers. There’s the Tobe Hooper ghost story and then there’s the playful Steven Spielberg family adventure. There’s no doubt that the film is ultimately a Spielberg production. Even the cast and crew have stated that Spielberg was on set almost every day and was the main creative force. Though, Hooper wasn’t necessarily a ghost on set either as he set up scenes and obviously had input on the story. At times, you see differences as some of the scares (i.e. the peeling face) tend to be much more in line with Hooper’s work on something like The Texas Chain Saw Massacre and its sequel. Then, there are more comic moments with characters doing mildly humorous things during a serious situation. These obviously come from Spielberg. The production as a whole just makes the film feel a bit uneven across the board.

Despite all of this, Poltergeist is a good horror film. Having not seen it in years, it’s instantly recognizable from its very first scene. The performances from everyone involved are great. Specifically, Heather O’Rourke and Zelda Rubinstein steal the show as Carol Anne and Tangina Barrons respectively. When the scares really get going, the film turns into pure insanity. Sure, it gets a little ridiculous but it’s still a lot of fun. You find yourself wondering what else can possibly be thrown at the Freelings as they’re trying to escape the vengeful spirits plaguing their house. The biggest problem with Poltergeist is in its tale of two films. There’s the Tobe Hooper version and the Steven Spielberg one. Though the two seemingly weren’t at odds during the production, there isn’t one vision presented onscreen. What you do get, however, is a good story with likable characters and some fun thrills. Ultimately, Poltergeist is worthy of some of the praise it gets even if it’s not quite the undisputed classic that some may argue it to be.