Remakes. This word carries a stigma for moviegoers everywhere. We all know how obsessed Hollywood is with capitalizing on past successful films. Normally, horror films tend to get the remake treatment more often but other genres have gotten in on the trend as well. Westerns like 3:10 to Yuma, crime dramas like Scarface, and even a heist film like Ocean’s Eleven have all been remade over the years. Then, you have a film like A Star is Born which recently registered its whopping fourth(!) installment.

The first iteration of A Star is Born was released in 1937 and starred Fredric March and Janet Gaynor. Both were nominated in their respective acting categories at the Academy Awards for the film. This wouldn’t be the first pair of acting nominations the title would secure as both Judy Garland and James Mason were nominated for their roles in the 1954 version as well. The 1976 version starring Kris Kristofferson and Barbara Streisand was released to much lesser praise than its two predecessors. Though, it also serves as more of a basis for actor and first time writer/director Bradley Cooper’s 2018 film with a bigger focus on the music industry as opposed to Hollywood in the first two.

The film opens with famous rock/country artist Jackson Maine (Cooper) AKA Jack playing a show in California. Following the show, Jack, an alcoholic and drug addict, instructs his driver to find a bar to acquire more alcohol. Unknowingly, Jack enters a drag bar where he witnesses a young woman, Ally (Lady Gaga), performing a rendition of Édith Piaf’s “La Vie en Rose.” Impressed by Ally’s talent, Jack and her spend the night opening up to one another and soon begin a romance. Jack invites her to his show the following evening in which he pulls her on stage to sing a song. From there, Ally’s singing career is sparked and, as she becomes more popular, Jack’s alcoholism and drug use spiral out of control as his career bottoms out.

For the sake of this review, it’d be pointless to compare Cooper’s film to the other three versions of A Star is Born. Obviously, there are similarities across the board for all of the films in terms of characters, subject matter, and overall story. Therefore, this will focus solely on the merits of the 2018 film alone. For the most part, there’s nothing overly new or groundbreaking about the film’s story. Yet, it doesn’t feel cliched or overdone either. The idea of varying levels of success putting stress on a couple has been touched upon in numerous films over the years. This has also been the case with substance abuse. Again, though, this film does a good job depicting the struggles of success and feels like a true industry story. 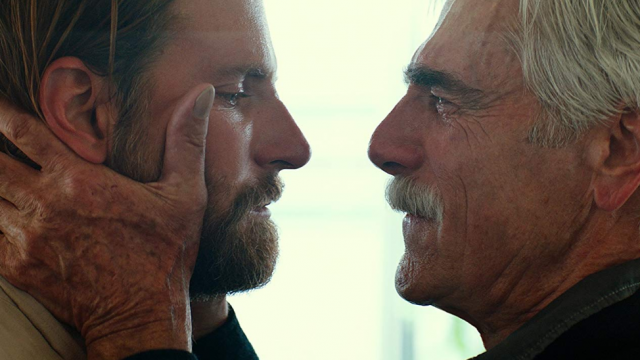 Ultimately, this is a credit to the phenomenal cast of A Star is Born. Both Bradley Cooper and Lady Gaga are superb in their respective roles. Cooper, who has been a Best Actor nominee for films like Silver Linings Playbook and American Sniper, puts in the best dramatic performance of his career here. As Jackson Maine, he lives a troubled artist lifestyle with his addictions but remains a sympathetic character throughout. You learn about his upbringing and the things that shape him into the person he is and you truly feel for him.

As was the case with the other versions of A Star is Born, the female lead, in this case, Lady Gaga, is the true standout of the film. She’s magnetic onscreen and delivers some killer vocal performances as she’s wont to do. Her and Cooper have a ton of chemistry and their performances alone make the film worth watching. That being said, Sam Elliott as Jack’s much older brother, Bobby, is an unsung star of the film. In his limited screen time, Elliott delivers a heart wrenching performance that should see him nab himself a Best Supporting Actor nomination alongside the two leads in the top categories come awards time.

Along with the excellent acting across the board, the film’s soundtrack is another highlight. The music covers multiple genres including rock, country, and pop and does so very well. Even if you’re not a fan of specific genres, the tunes are infectious and admirably performed. Cooper approached musician Lukas Nelson, son of the legendary Willie Nelson, to help with the music for the film. Nelson, among others, wrote a number of songs along with Cooper and Lady Gaga for the soundtrack. Both stars provide their own vocals with Cooper doing a fine job next to the uber-talented Lady Gaga. Songs like the opening number, “Black Eyes,” “Shallow,” and “Always Remember Us This Way,” stand out as showcases of both actors. Though, Gaga’s performance of the film closer, “I’ll Never Love Again,” is another moment that will tug at the heart strings and solidifies the singer-turned-actress’s undeniable talent. 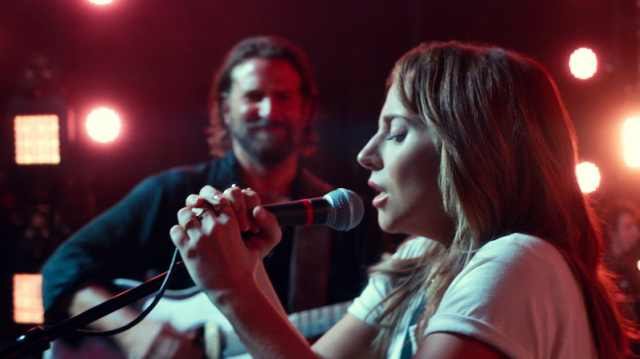 If there are any negatives when it comes to A Star is Born, it’s in the film’s overall storytelling. Come to think of it, the title is a bit misleading it should actually be A Star is Discovered. As soon as Jack pulls Ally onstage, she’s essentially a star as she doesn’t necessarily have any adversity to overcome. Her only real issues are Jack’s bad habits and her record producer, Rez (Rafi Gavron), who urges her to move in a more pop direction and change her look. Yet, Ally is more than happy to oblige with Rez’s requests if it means stardom. Ally’s ascent feels somewhat contrived which is a bit of a turnoff given her seemingly humble beginnings.

In addition, the film’s editing doesn’t do the storytelling any favors either. The actual assembly of shots isn’t bad. The film just feels like a collection of events with no gradual progression. The film opens with Jack as a star. He meets Ally, pulls her onstage, and then she’s a star. Then, Jack isn’t a star because of his addiction problem and the chain of events continues. It almost feels like a CliffsNotes version of the story. The same goes for Jack’s drinking. In one scene, he’ll be drunk and, in the next, Ally will specifically say that he’s sober. There’s a strange pacing and it seems like a lot of telling as opposed to showing. Again, it’s not necessarily bad but it does hold you back from becoming fully engrossed in the story.

Ultimately, A Star is Born is a great film overall. One could even say that it’s close to exceptional. As a directorial debut, Bradley Cooper displays oodles of talent behind the camera on such an ambitious project. Yet, the storytelling aspect is almost there but falls just short. The back and forth issues between Jack and Ally as well as the choppy structure focusing too heavily on specific events hamper the film. Regardless, there’s little doubt that A Star is Born will be heavily featured at the Oscars in February. With its fantastic cast, it should dominate many of the acting categories. Hell, even Andrew Dice Clay puts in a nice performance as Ally’s father. It wouldn’t be surprising to see it nab a Best Picture nomination either. When all’s said and done, A Star is Born is a great film highlighted by its acting, soundtrack, and direction from first timer Bradley Cooper. As the fourth go-round for the title, it’d be tough for a fifth to top this 2018 version.