Every holiday season, there are a handful of Christmas films that are seemingly played on loop on televisions nationwide. Classics such as A Christmas Story and National Lampoon’s Christmas Vacation have been mainstays in households for years. The former has even been aired for 24 straight hours on cable TV annually since 1997. Then there are the classic Christmas specials of the 1960’s like Rudolph the Red-Nosed Reindeer, A Charlie Brown Christmas, and Dr. Seuss’ How the Grinch Stole Christmas that have become standard viewings during the season. One additional film that should be ranked into this elite class yet has mostly fallen through the cracks is The Muppet Christmas Carol.

Released in 1992 to only modest success, The Muppet Christmas Carol has just as much charm as any of the aforementioned holiday films. Based on the 1843 novel, A Christmas Carol, by Charles Dickens, the movie sticks true to the source material while highlighting fan favorite characters like Kermit the Frog and Miss Piggy. It also fits the definition of a musical with its handful of original songs sung by the characters. It’s the fourth film of the Muppets series but, unfortunately, the first without creator Jim Henson. Henson tragically passed away in 1990 from streptococcal toxic shock syndrome. Regardless, The Muppet Christmas Carol maintains the magic, appeal, and comedy of previous Muppet films.

For those that have been living under a rock and have never seen any iteration of the Dickens classic, the plot is quite simple. Crotchety businessman, Ebenezer Scrooge (Michael Caine), hates anything having to do with Christmas. On the holiday’s eve, he’s visited by the ghost of his former business partners, Jacob and Robert Marley. They warn him of three spirits that he’ll encounter that night. The spirits, the Ghosts of Christmas Past, Present, and Yet to Come show Scrooge how each of his Christmases occur if his life continues on its current path. Scrooge must change his despicable ways or meet certain doom. 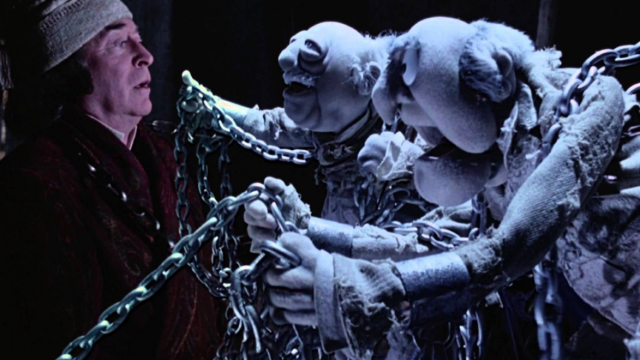 The first thing that must be said about this version of the story is how well the characters all work together. Including Caine, there are a number of human characters but they coexist in a world with the Muppets. This isn’t unlike previous Muppet works but it’s impressive how easy it is to suspend disbelief. Kermit the Frog, this time voiced by Steve Whitmire who took over for Henson, and Miss Piggy star as Bob and Emily Cratchit. Bob, of course, is a kindhearted and faithful employee to Scrooge and is a big influence on the eventual turnaround. Other Muppet favorites such as Fozzy Bear, The Electric Mayhem, Dr. Bunsen Honeydew, and Beaker also make cameo appearances throughout the story. Also, the film is narrated by Gonzo (as “Charles Dickens”) and Rizzo the Rat who are both great in their roles.

Another Muppet staple is the music. The songs in The Muppet Christmas Carol are ridiculously catchy and will be stuck in your head immediately. Specifically, the songs “Marley and Marley” and “It Feels Like Christmas” are infectious and occur during important turning points for the character of Scrooge. There’s a bit of controversy over one song from the film, “When Love is Gone”. The song was originally omitted from the theatrical release of the movie. It was then reinserted into the VHS version only to be taken out for the DVD and Blu-ray release once again. While its omission doesn’t ruin the film, it’s during a scene where a young Scrooge loses his girlfriend, Belle, due to his hunger for money. Without the song, the partial scene feels like a waste of time and is more confusing than anything. 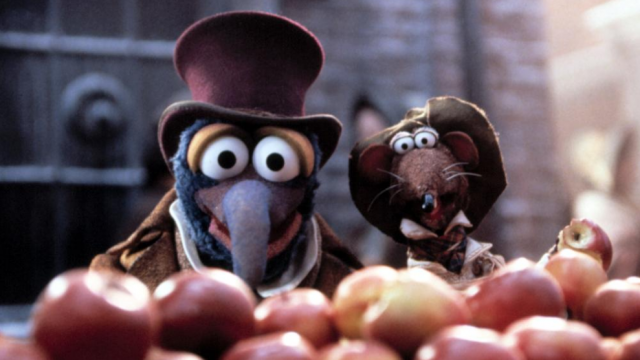 What’s great about The Muppet Christmas Carol is how it’s such an excellent retelling of the Dickens story. It just happens to feature the Muppets. Michael Caine is excellent as Scrooge and is able to convey all of the emotions that the character goes through. He’s so great in the role that you frequently forget that it’s him. He becomes Ebenezer Scrooge. Also, the movie seamlessly fluctuates in tone just as much as Caine does in his role. There are scenes that are quite chilling especially for a kids movie. The scenes with the hecklers, Statler and Waldorf, as the Marleys as well as anything with the Ghost of Christmas Yet to Come are extremely grim. They bring a serious tone to some very important moments within the story.

When all’s said and done, The Muppet Christmas Carol is a ridiculously underrated version of A Christmas Carol. Even its contemporaries like Scrooged and the animated Jim Carrey-led version of A Christmas Carol tend to get more praise. Despite losing their creator, the Muppets continued to shine in their fourth full length feature. The voice acting and puppetry is top notch as the Muppets and humans interact together. Most of the popular characters get screen time with the most notable exceptions being Rowlf and Scooter. The Muppet Christmas Carol is everything that a holiday film should be. It’s humorous, entertaining, well acted, and has a positive message. It’s a shame that more people don’t recognize it for the consummate classic that it is.