When assembling a list of the greatest horror directors of all time, the list isn’t overly long. There are only a handful of true icons like Wes Craven, George A. Romero, and Dario Argento. Perhaps the most synonymous name in horror, outside of Alfred Hitchcock, is John Carpenter. While many of his films were critical failures, his filmography has become chocked full of cult classics. Of them, Carpenter’s 1982 version of The Thing is arguably his best.

Of course, Carpenter will always be best known for creating the character of Michael Myers in his 1978 film, Halloween. However, he also pumped out plenty of quality films throughout the late 1970’s and 1980’s. Padding his resume are titles like The Fog, They Live, Christine, and Escape from New York along with its sequel, Escape from L.A. Carpenter’s version of The Thing is a take on the 1938 novella, Who Goes There?, by John W. Campbell. Though, Campbell released his novella under the pseudonym Don A. Stuart. There was also a 1951 film based on the novella, The Thing From Another World, of which Carpenter is a personal fan but avoided in his version. Although it didn’t do well upon release, The Thing is easily one of Carpenter’s best works and is a science fiction/horror masterpiece.

The film begins with a Norwegian helicopter chasing a dog as it runs through the snow in Antarctica. The helicopter’s passenger tries to shoot and kill the dog with no luck. They land near an American research facility and accidentally blow up the helicopter while one of the American researchers dispatches the remaining Norwegian. They take the dog in and, from here, the terror begins. The researchers, led by R.J. MacReady (Kurt Russell) discover that the dog is actually an alien life form that imitates its victims, adopts their traits, and physically becomes them. Throughout the film, the team’s paranoia escalates as no one can be trusted.

While there are quite a few characters, the script does a good job getting most of them involved. There are some characters that don’t have much to do but the majority of them are memorable. Childs (Keith David), Dr. Copper (Richard Dysart), and Dr. Blair (Wilford Brimley) are probably the most memorable. Though, Garry (Donald Moffat), Clark (Richard Masur), and Nauls (T.K. Carter) also have their moments to shine. Obviously, Kurt Russell as MacReady is the lone star here and he doesn’t disappoint. He’s your standard tough guy character who’s always looking to get drunk and he’s the ultimate bad ass because of it. While he’s not overly personable, you root for him every step of the way. 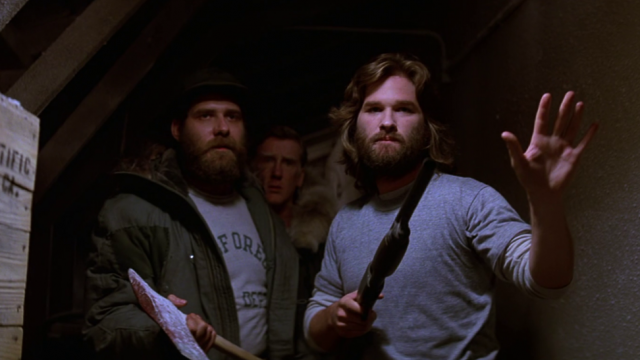 The story isn’t overly complicated which is definitely a good thing. From the get-go, you get thrown into the action and you basically know just as much as the researchers do. There’s no true explanation as to where “the thing” comes from or why it does what it does. It’s a parasite that can become any animate being. It’s relatively easy to kill but every cell of it is its own individual being which makes it difficult to completely destroy. The researchers quickly figure out that its weakness is fire and they use plenty of it throughout the film. From start to finish, the story is a wild ride that moves from scene to scene with the scares getting bigger and bigger as the plot progresses.

The best part about The Thing are in Rob Bottin’s special effects work. The practical effects used for the monstrosities in the film are unbelievable. In today’s industry, all of the effects would be created through CGI and they’d look far worse. There’s just something about practical effects and their tangibility that can’t be replicated by an effect created on a computer. Each incarnation of the thing is different and absolutely horrific. Blood and gore are abound in the film and every time a new thing appears, you’re in awe of how impressive and unique the effects are. In this regard, every scene is a treat to watch and you can’t wait to see how things progress. 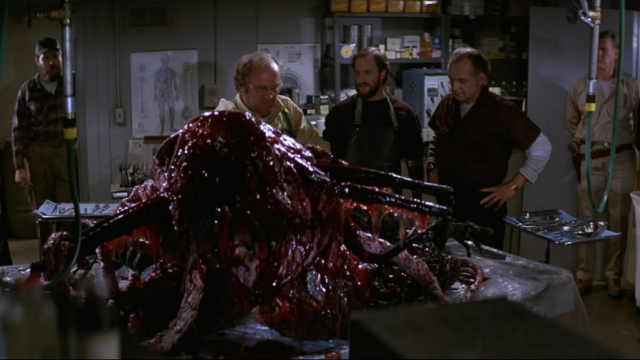 So, is there anything bad about John Carpenter’s The Thing? In all honesty, not really. Sure, the ending is a tiny bit anti-climactic with limited screen time for the final incarnation of the thing. Regardless, it still feels entirely satisfying. On another note, the score is quite minimalistic. Oddly enough, Carpenter, who usually composes his own scores, didn’t take on the task in this film. Legendary composer, Ennio Morricone, took on the music and basically performed his own version of a Carpenter score. It works for the film but it’s not all that memorable right off the bat. It’s certainly not as iconic as either man’s best work on films like Halloween for Carpenter and The Good, the Bad and the Ugly for Morricone.

Despite those extremely minor shortcomings, The Thing is an awesome horror experience. The scares are aplenty as you never know when or where they will happen. The special effects, especially for 1982, are simply awesome and still hold up well today. Everything about this film is great and it’s a breeze to watch. The film doesn’t feel as long as its nearly two hour runtime. Before you know it, the final credits will roll and you’ll be wishing that there was more. Of all of his classic films, even Carpenter has stated that it’s one of his personal favorites of his own work. Basically, if you’ve never seen The Thing, do yourself a favor and check it out. It’s easily one of the best special effects driven horror films in history and it’s just awesome.

One Thought to “ICYMI Review: The Thing”