Alright. It’s time to talk about a new adaptation of a Stephen King novel. No, not that one. Yuck, not this one either. That’s right. There’s another adaptation that saw its release two Fridays ago as a Netflix Original. Among the countless films based on King’s work over the past few decades, Gerald’s Game may be one of the biggest surprises. While It and The Dark Tower may have gotten all of the promotion, Gerald’s Game is arguably the best of the three in terms of its acting, story, and overall quality.

King’s original novel, released in 1992, has never been known as one of his best works. This could definitely be why the film didn’t see a theatrical release. It’s directed and co-written by Mike Flanagan who continues to build his name in the horror genre. Flanagan is also responsible for films like Oculus, Hush, and Ouija: Origin of Evil. All three films received favorable reviews upon their respective releases. Flanagan relies on a feeling of dread and/or helplessness over gore. In today’s horror scene, this is a welcome breath of fresh air.

The plot of Gerald’s Game is pretty simple. A couple travel to an isolated lake house in an attempt to reinvigorate their marriage. Upon arrival, the husband, Gerald (Bruce Greenwood), handcuffs his wife, Jessie (Carla Gugino), to two bedposts as they try to spice up their sex life. Jessie is turned off by the idea and the two argue as she’s still cuffed to the bed. Gerald has a sudden heart attack and dies leaving Jessie alone and with no escape. As Jessie is restrained, she begins to lose her mind while reliving her unsettling memories and being tormented by a large, deformed man (Carel Struycken) and a dog that she fed on the road that makes its way into the house. 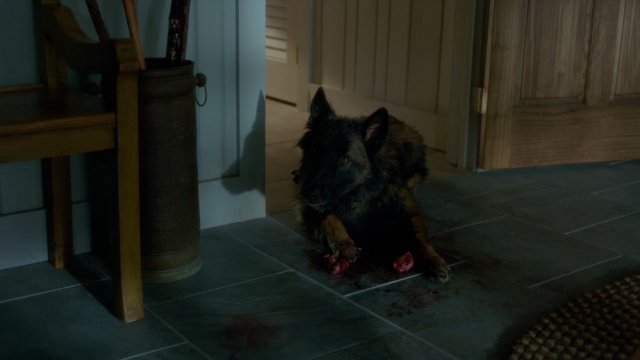 This film rests solely on Carla Gugino’s performance as Jessie and she doesn’t disappoint. She spends about 90% of the film stuck in the handcuffs but she still has interactions with others. As her mind deteriorates from shock, exhaustion, and dehydration, she has discussions with her hallucinations. She’s also terrified of the deformed man, who she dubs “the Moonlight Man,” as well as the hungry dog’s intentions. While Gugino gives a stellar performance, Bruce Greenwood is no slouch either. Even in death, his character is a main part of the story and he helps motivate/intimidate Jessie as she’s trapped.

One thing that definitely sets Gerald’s Game apart from most horror/thrillers these days is that it feels legitimate. This is an actual scenario that someone could find themselves in and, in that case, what would you do? Again, Flanagan doesn’t rely on blood and guts for his scares. There are a number of moments that are extremely creepy and/or cringeworthy that you just don’t get in a lot of horror films today. Specifically, the introduction of the Moonlight Man is one of the most effective scares in the entire film. Jessie’s past memories are emotionally distressing too and the scenes do well to help define her character. There’s one scene that features a bit of gore but it’s extremely effective and fits into the story. Again, not something that you always get with modern horror. 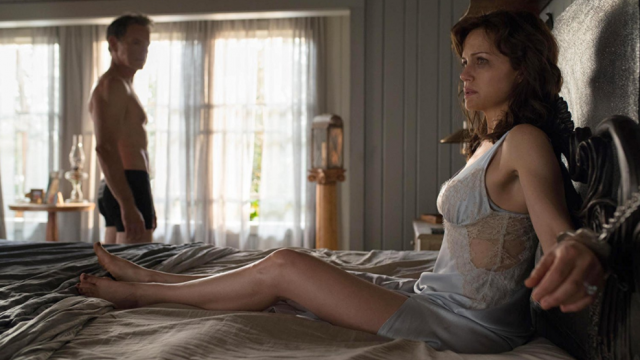 While there really aren’t any necessarily bad things, the ending is the most questionable part of the film. Likewise, the ending of the book was also polarizing among Stephen King fans. Of course, we won’t spoil it here but it does need to be addressed. Fans of the book have questioned why the ending of the film wasn’t changed. In an interview with GQ, director Mike Flanagan has stated that he wanted to protect the intentions of King’s work with only minor changes. In this respect, he absolutely succeeds. Though, the ending does feel like it strays slightly into the absurd. It’s not terrible but it feels a bit hokey.

In all honesty, if it wasn’t for the ending, Gerald’s Game would easily be 4.5 stars. Even as it stands, it’s closer to a 4.25 than a flat 4. While it’s not flashy, gory, or over-the-top, it’s still a tense experience. Even at its 103 minute runtime, it flies by. There isn’t a second where you’re not fully invested in Jessie’s predicament. You learn more and more about the character as the story continues and it always feels like it’s building to something big. The climax is difficult to watch but it’s so effective because of it. While Stephen King’s It may have raked in the big bucks at the box office and is a good film in its own right, it could be argued that Gerald’s Game is the better film overall. For a Netflix Original, that’s definitely saying something.