Since his feature film debut in 2003 with House of 1000 Corpses, Rob Zombie’s directorial career has mostly trended downwards. Corpses wasn’t a smash hit but it has gained a cult following over the years and is an entertaining watch at the very least. Zombie hit his peak with its sequel, The Devil’s Rejects. Whereas his previous effort felt more like an homage to The Texas Chain Saw Massacre, The Devil’s Rejects felt like its own film. Zombie proved himself to be a capable director on that film but, ever since, has revealed himself to be a shoddy storyteller at best. Thus is the case with his newest film, 31.

Zombie had a legitimate chance to break out with his remake of slasher classic, Halloween. Instead, what fans received was a vulgar, bloody affair propelled by awful dialogue, a meandering story, and hillbilly characters. Essentially, this is the guide to filmmaking that Rob Zombie now follows. Every subsequent film after The Devil’s Rejects has suffered from the same flaws and they simply continue to get worse.

31 is centered around a group of carnival workers that get kidnapped after a long, arduous scene of them blathering on about nothing. Seriously. From the very beginning, the dialogue is uninteresting, unfunny, unnecessary, and flat out useless. Their captors force them to play a game called “31” in which the goal is to survive for 12 hours. They are hunted by a group known as the “Heads” (Sick, Psycho, Schizo, Death, Sex, and Doom) throughout a large warehouse. The Heads are assigned to do the hunting by three classic looking aristocrats, complete with powdered wigs, lead by Father Murder (Malcolm McDowell).

Firstly, the cast is made up of many of Rob Zombie’s past collaborators. Of course, his wife, Sheri Moon Zombie, plays one of the lead characters, Charly, and, yes, she’s objectified as per usual. Jeff Daniel Phillips, Meg Foster, and Judy Geeson recently worked with Zombie in The Lords of Salem while McDowell, Lew Temple, E.G. Daily, and Richard Brake worked with him on his prior films. For the most part, the acting is decent even with Zombie’s atrocious dialogue. 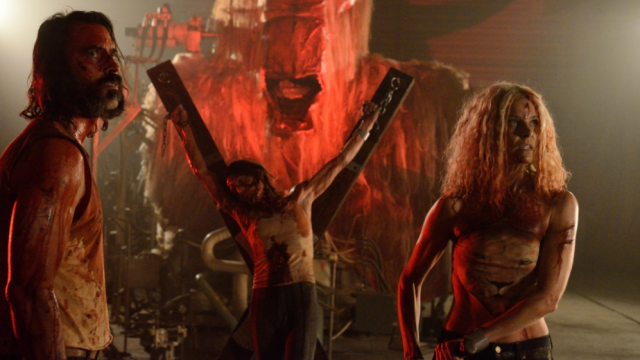 Of the aforementioned actors, it’s Richard Brake’s character, Doom-Head, that steals the show. While characters like Psycho-Head and Schizo-Head are, for lack of a better term, psychotic, Doom-Head is cold, calculated, and unforgiving. The monologues he gives to his impending victims aren’t threats. They’re fact. He has every intention of murdering his prey but also wants them to know that he’s going to enjoy it. The only negatives of his character are an unfortunate and embarrassing sex scene and some excessive cursing.

Another positive of 31 is Zombie’s technical skills. For as bad as he is at writing dialogue and concise stories, he has an eye for interesting shots and set design. The imagery in this film is excellent and it truly makes you wish that he was able to furnish a better overall product. In particular, there’s a scene in which Sex-Head (E.G. Daily) is slowly closing in on Roscoe (Jeff Daniel Phillips). There’s a blue strobe light flickering and her wide eyes and facepaint pierce through the darkness during the strobe effect. It results in a legitimately chilling image that is definitely a brief standout moment in the film.

Another highlight of 31 is the original soundtrack. As usual in a Zombie film, there is plenty of popular music but it’s the score that sticks out this time around. Written by Zombie, John 5, Chris “Zeuss” Harris, and Bob Marlette, the music is simple and haunting. Sometimes it’s easy to overlook the music. However, during some of the quieter suspenseful moments, it’s given time to shine. 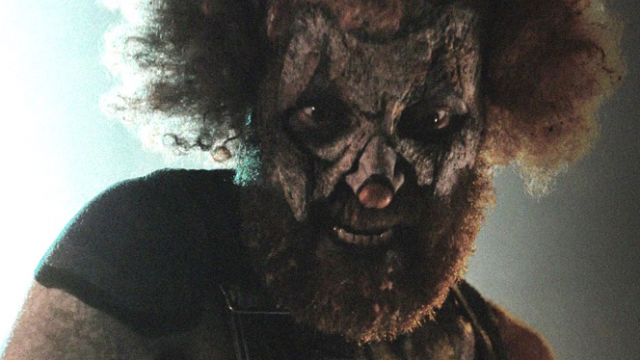 Most of what has been said about the film is in regards to Zombie’s technical skills despite his inept screenwriting. Unfortunately, there just isn’t much to say about the story in 31. There is no story. All that happens is killing. The audience learns nothing about the characters or the game itself. There’s no explanation as to why Charly and her friends were targeted or why Father Murder and his associates do what they do. Everything is completely senseless. If anything, it’s a ripoff of House of 1000 Corpses in style. It even rips off a few plot points from that film. 31 just isn’t nearly as memorable or entertaining.

Over the years, Rob Zombie continues to prove that he’s a flash in the pan in the world of film. His first two films were his best works and he has gotten depressingly worse since. What’s most unfortunate is that, again, his technical skills have gotten so good. His propensity for good camerawork, set design, and mood is perfect for the horror genre. Also, the cinematography on his films, especially The Lords of Salem, has been fantastic. Rob Zombie is just unable to make that next step towards being a legitimate filmmaker. Vulgarity, excessive violence, and ugliness define 31 and none of those terms come with endearment. It’s no doubt that while Zombie was trying to return to his roots with 31, instead, he produced his worst film yet.