Has anyone else noticed how many space exploration dramas there have been over the past decade or so? In the past few years alone, we’ve seen First Man, Life, Passengers, The Martian, Interstellar, and Gravity. Seriously. There have been so many and the problem with that is the amount of similarities. Sure, none of them are an exact carbon copy of another but many of the issues and conflicts have overlapping themes. Well, 2019 (AKA the blandest year of filmmaking ever) wasn’t going to miss out on an opportunity for its own space drama. James Gray’s new film, Ad Astra, hit theaters recently and is receiving a ton of critical praise. Is it really as good as critics are saying though?

Gray isn’t the flashiest name in Hollywood especially when compared to some of the heavy hitters (i.e. Ridley Scott, Christopher Nolan, and Alfonso Cuarón) whose films are listed above. However, he has been responsible for some rock solid titles like We Own the Night, The Immigrant, and The Lost City of Z under his belt. It’s nice to see such variation in films while looking at Gray’s filmography as well. Everything he has done has been mostly quality. Though, the writer/director is still lacking a true standout cinematic work. Sadly, Ad Astra doesn’t do much to change that.

The film begins in the near future with Major Roy McBride (Brad Pitt) nearly dying after mysterious power surges occur across the universe. They are traced back to the Lima Project, an expedition led by Roy’s father, H. Clifford McBride (Tommy Lee Jones), thirty years ago to search the Solar System for signs of intelligent life. The Lima Project had gone silent after reaching Neptune but, following the surges, the belief is that Roy’s father may still be alive after all these years. Along with his father’s old associate, Colonel Pruitt (Donald Sutherland), Roy accepts a mission to Mars to establish a line of communication with his missing father in an attempt to save the universe.

Initially, the plot of the film feels an awful lot like Nolan’s 2014 film, Interstellar. There are some differences but the general feeling is very similar with each films’ protagonists traversing the universe while past expeditions go silent. This is the problem with these space oriented films in general. For many of them, they just don’t seem to cover any new ground. They focus on missing expeditions, secret objectives from superiors, the loneliness and isolation of space travel, and compounding paranoia for the main characters. Say what you will about franchises like Star Wars and Star Trek but at least there’s a sense of adventure and fun. Many of the modern space dramas, Ad Astra included, travel down some well worn paths in terms of story. 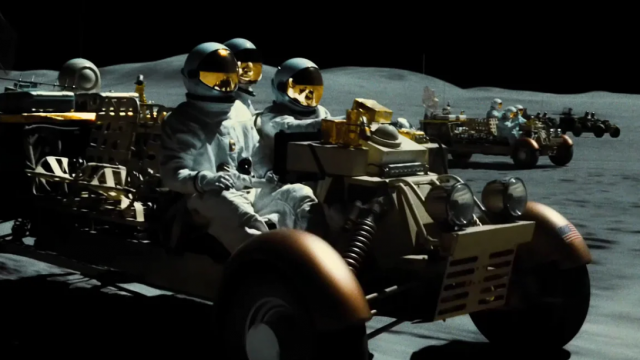 Before delving into further criticism, it should be known that this isn’t a bad film by any means. The cinematography, special effects, and music are all very good. This is one aspect that other films in this vein have gotten right as well. The time period and technological developments within Ad Astra are quite interesting as well. Roy takes a commercial flight to the Moon which almost feels like a cosmic shopping mall on the outside with its signage for stores and restaurants. There are also people who live on and have never known anything but Mars. The acting in the film is decent. This isn’t unexpected with name talent like Pitt, Jones, Sutherland, Ruth Negga, and Liv Tyler receiving top billing.

In this case, however, “decent” is a disappointment. Negga and Tyler are largely overlooked in this film and their characters don’t have a huge impact on the overall story. Donald Sutherland’s character is essentially a throwaway to the point of wondering why he was even cast in the first place. This is especially true after his Colonel Pruitt leaves Roy to travel by himself and is never heard from or mentioned again. Tommy Lee Jones as H. Clifford McBride is probably the most intriguing character in the film. Yet, that still doesn’t keep you from easily guessing his role to play from the very beginning. It’s obvious where the film is headed and the surprise, or lack thereof, fails to be impactful. Pitt, as always, does his job but Ad Astra is not the film that he’ll be remembered for in 2019. Roy is extremely calm and focused throughout the film. While that could be an interesting trait, the character comes off as bland and mostly robotic. It’s hard for an audience to ever sympathize or root for him given his complete lack of personality. This isn’t necessarily Brad Pitt’s fault as the character is poorly written and not poorly acted. 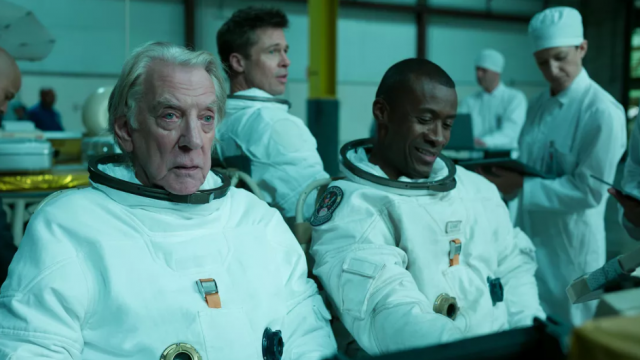 Many of these issues could’ve been forgiven or gone overlooked if the film wasn’t so damn long and boring. At just over two hours, Ad Astra is a perfectly normal length but, unfortunately, you feel every single minute of the film’s runtime. There just isn’t a whole lot happening for most of it. There are so many scenes that seem to run in slow motion. As a viewer, you’ll know exactly where a scene is headed but it takes its sweet time getting there. This film could’ve easily been a brisk 90 minutes and it would’ve been all the better for it. There are some action scenes like the lunar chase and the SOS distress call fiasco. However, they feel as if they were added in later and not a part of the original story. Coincidentally, the film did suffer from some poor test screenings so it’s possible that this was the case here.

Ultimately, Ad Astra is certainly a watchable film. You may even end up liking it depending on personal preferences. Though, there’s not enough here to make it a standout even in such a down year for cinema. Christopher Nolan’s Interstellar was a flawed film in its own right but it’s certainly more memorable than this. Both Ridley Scott’s The Martian and Alfonso Cuarón’s Gravity are both vastly superior to Ad Astra as well. Simply put, while Ad Astra isn’t bad by any means, there are much better space exploration dramas to watch.