Alright. Do you see this picture to the left? Look at that smile. If you make your way to the theater to see Tom Cruise’s newest film, American Made, be prepared to see a lot of this face.

In saying that, it isn’t necessarily a bad thing. The film is certainly entertaining enough and Cruise is definitely a capable actor. However, this picture is basically a visual analogy of the entire experience. It’s a lot of Tom Cruise just having fun. It’s slightly off-putting for a supposed true story about deception and gun/drug running.

American Made is based on the true story of American pilot Barry Seal (Cruise). It was written by Gary Spinelli and directed by Doug Liman. Liman, of course, is responsible for other solid films like Swingers, Go, The Bourne Identity, and  Edge of Tomorrow. Unlike some of his work, this film isn’t centered around its action scenes. It’s more like a comedy than anything with Cruise’s amusing performance and the story’s laid back feel.

In the late 1970’s, TWA pilot Barry Seal is approached by Monty Schafer (Domhnall Gleeson). Schafer recruits him for reconnaissance missions in which Barry flies a plane over hostile territories to acquire pictures for the CIA. Soon, he’s also recruited by the Medellín cartel, led by Pablo Escobar (Mauricio Mejía) and Jorge Ochoa (Alejandro Edda). They task Barry with smuggling cocaine into the United States. Eventually, the DEA is onto Barry’s drug smuggling and he must carefully navigate his way between the cartel and the US government while also protecting his wife, Lucy (Sarah Wright), and his children.

Firstly, the acting is quite good from all involved and everyone fits with the feel of the film. Surprisingly, there isn’t a single character that’s played completely straight in a movie containing the Medellín cartel and the government. Unlike Wagner Moura’s portrayal of Pablo Escobar that has been seen in the Netflix show, Narcos, Mauricio Mejía’s version is much less threatening. On top of that, he kind of takes a back seat to Alejandro Edda’s Ochoa. Even Domhnall Gleeson, who has been in nearly everything these days, gets a few wisecracks in while dealing with Cruise’s Barry. Of course, Tom Cruise steals the show though. As usual, he’s charming and droll while doing his best Matthew McConaughey impression. You can just tell that he had a lot of fun with the role. 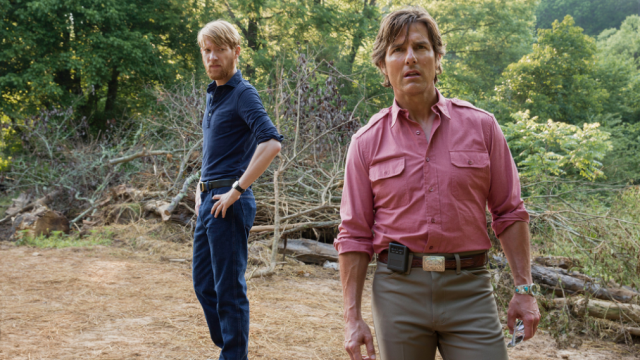 The way the film is shot is also a highlight. Though, it does detract once in a while too. For much of the runtime, American Made has a documentary type of feel to it. The way the camera moves makes it feel like someone’s legitimately recording the events of Barry’s life. There are some quirky moments where Barry will be explaining certain tactics to the audience in which pictures, maps, etc. will pop up on the screen. It all helps to engage the audience into the story as opposed to remaining distant spectators. The only negative comes from having almost too many camera angles at times. Early on in the film, there are so many cuts from nearly every conceivable angle when you just wish the camera would focus on the characters and the story being told.

As with many of these 1970’s and 80’s era biopics, the music is on point and fits the content. Yet, this is also an instance in which other films have had more memorable and impactful music. While the music in American Made is definitely good, it’s hard to think of a particular instance where it enhances the scene. Sure, Errol Brown’s “You Sexy Thing” is in the movie, but where was it? What was happening when it was playing? In contrast, who can forget the opening cocaine production scene from Blow with “Can’t You Hear Me Knocking” by The Rolling Stones playing? How about the airport scene with Johnny Depp walking in sync to Ram Jam’s “Black Betty?” None of the music in American Made will make any of the scenes feel as iconic as ones from other films. 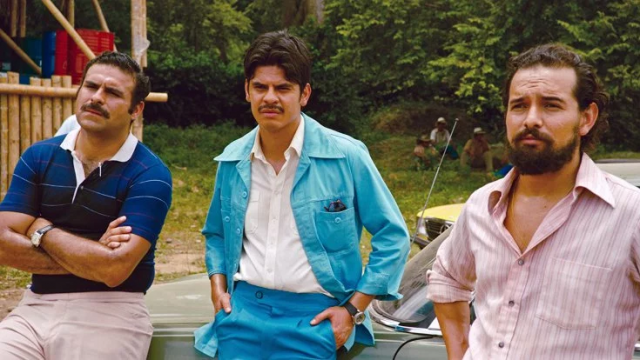 In all honesty, that’s kind of how American Made feels in that it never exceeds the quality of similar films. It’s like Blow but not nearly as touching or memorable. It’s like The Infiltrator but not as dramatic. Even last year’s War Dogs could rival this film in terms of its comedy and let’s not get started on how a show like Narcos easily trumps the cinematic fluff that is American Made. Also like War Dogs, many of the events in the this film didn’t happen as portrayed onscreen. While this is common in movies, it still needs to be addressed that this isn’t an entirely factual representation of the life and times of Barry Seal.

While much of that may seem harsh, American Made still isn’t a bad film. As previously mentioned, it’s entertaining enough to keep your attention and Tom Cruise does a good job with the character. It’s most certainly a piece of  Hollywood fluff though. Even director Doug Liman described it as “a fun lie based on a true story.” There’s nothing wrong with that but it does make you wonder why someone would even bother telling this story. If the source material is interesting enough to make a feature film, then why not just tell that story? Either way, American Made is an enjoyable time at the movies. If that’s all that the director intended, then kudos to him. Though, if you’re looking for something more emotionally gripping and memorable, you’d do better to look elsewhere.