What happens when you mix elements of black comedy, action, horror, and a splash of exploitation into one package? More specifically, what would happen if a filmmaker tried to combine The Purge with Mean Girls? For the few of you who may have been clamoring for that mishmash, it comes to you in the form of Sam Levinson’s Assassination Nation. If you’re reading this and thinking of how big of a mess that is, you’re not wrong. Though, there’s something to this film even if one can’t fully put their finger on it.

Assassination Nation marks the second film from writer/director Sam Levinson following 2011’s Another Happy Day. Levinson, of course, is the son of Barry Levinson who’s most remembered for films like Toys, Good Morning, Vietnam, and Rain Man. The younger Levinson’s new film is the first to be released under the Foxtail Entertainment banner created by Matthew Malek and Anita Gou. Among the plethora of producers (seriously… 23!) which includes Malek and Gou, is David S. Goyer who’s most well known for his involvement with Christopher Nolan’s Dark Knight trilogy.

The film opens by flashing many insensitive trigger warnings that may be tripped during the film including the usual blood, drug use, and sexual content all the way to transphobia, giant frogs, and fragile male egos. The story takes place in Salem, Massachusetts, and centers around a group of four high school girls, Lily (Odessa Young), Bex (Hari Nef), Sarah (Suki Waterhouse), and Em (Abra). As the girls go about their daily high school lives partying and talking about boys, an unknown hacker sends out lewd photos of Mayor Bartlett (Cullen Moss) in women’s clothing with male escorts. Soon after, Principal Turrell (Colman Domingo) is hacked as well. Despite leading a normal life, his photos are misinterpreted and he’s labeled as a pedophile. The hacks continue and, eventually, the entire city goes crazy as they attempt to hunt down and murder the four girls for their various wrongdoings.

Firstly, we’ve already stated that Assassination Nation is quite a mess of a film. Initially, it seems like an unsympathetic and desensitized high school romp. Other than the four friends, the rest of the characters are mostly inconsequential to them. Lily has a boyfriend named Mark (Bill Skarsgård) who mistreats her when he’s drinking. Yet, Lily spends a lot of time texting someone the audience knows only as “Daddy.” In addition, there’s an awkward reveal of a character being transgender during a sexual encounter. However, it’s blown off and forgotten about before eventually coming back. The second half of the film is straight up unapologetic. It turns into a violent, horror-driven exploitation film. There are brutal murders and depictions of torture. The contrast in tone is jarring but, somehow, Levinson makes it work for the most part. 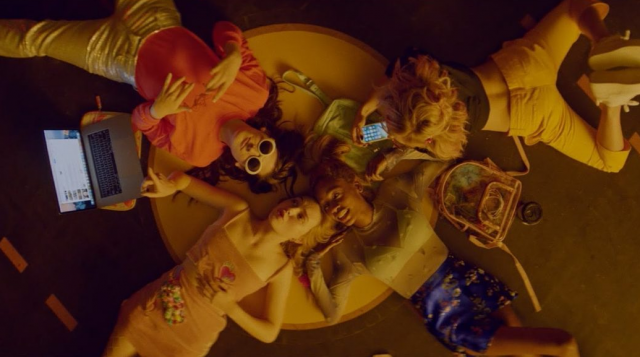 When it comes to the characters, Odessa Young’s Lily is the main focus. The film does a good job of showing her care-free nature and her drive to stand out. Though, her viewpoints, however controversial they may be at times, are made known. She’s often scantily clad and has no problem being eye candy for either Mark or, via technology, Daddy. She does go through changes as her own private photos are leaked and you see her vulnerability as well. It’s an instance where sometimes what people show on the outside isn’t who they truly are inside. It makes Lily into a somewhat relatable character despite her flaws. Bex is the next closest thing to a main character. Without spoiling anything, her character’s arc comes full circle and it feels like a legitimately important moment in the film.

In terms of style, Assassination Nation has tons of it. Like the plot, it’s a bit all over the place. Though, it never feels like too much. There’s some good usage of color that’s reminiscent of films like The Neon Demon and it matches the plasticity of the characters. By the film’s grisly turn in its second half, there’s plenty of action and blood to satisfy horror fans. The women fight back against their male attackers in a sort of Hard Candy/I Spit on Your Grave type of idea. The entire film looks great throughout and you don’t have any problem following the story or the action. 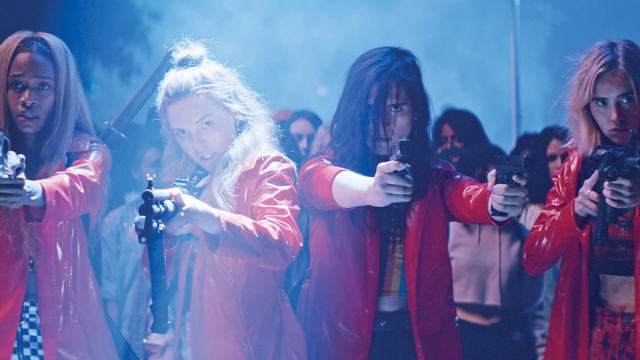 The biggest problem with Assassination Nation is in its overall message. There are hints of a strong idea here but that idea is never fully realized. At one point, Principal Turrell scolds Lily for turning in a drawing of a nude woman in her art class. She argues that all people see is the nudity and not what it actually means. She makes a convincing argument and it’s in these moments that the film relays its worthwhile message. Additionally, the early trigger warnings are a fun and easy way to basically point out how the world has gone completely soft in 2018. Everything has become a taboo and everyone is constantly under the radar (i.e. social media and technology). These things are buried at the core of Assassination Nation but, at times, it seems like Levinson and company forget how the characters arrive where they are. There’s a danger to technology and those who wield it as well as the general public constantly trying to make everything politically correct. Again, though, the film is inconsistent with maintaining focus on its own ideals and you often wish it would stick with this theme throughout.

For as all over the place as Assassination Nation is, it’s a very watchable film. Even with its warnings, the film can be verbally graphic at times which may be uncomfortable for some. However, there’s a very interesting and relevant idea behind it. It’s a film that addresses political correctness by being anything but politically correct. The problem is that the film can’t seem to latch onto what makes the story interesting and it does suffer because of it. This is one of those instances where a film tries to do too much with its clash of styles, exploitative nature, violence, and even its tender moments. Although it doesn’t completely hit its mark, Assassination Nation is an experience not to be forgotten. Sometimes you just have to dig a little deeper to find the good stuff.