When it comes to killer animals in horror, it’s hard for most viewers to take them seriously. Films like Piranha 3D and Sharknado make it known that their premises are dumb but they tend to deliver when it comes to action and gore. On rare occasions, there are some killer animal movies that are played straight and try to make their beasts feel legitimately scary. Of course, Jaws may be the most well known example of a serious attempt but others like The Birds and Cujo have carved out their own place here as well. Unfortunately when it comes to Alexandre Aja’s new film, Crawl, the director maintains a serious tone but neglects to insert any of the fun that’s expected from a killer animal film.

Aja has etched out a decent career for himself in horror with films like High Tension, Mirrors, and Horns under his belt. He also directed the aforementioned Piranha 3D. Aja’s biggest accomplishment, though, is probably the 2006 remake of Wes Craven’s The Hills Have Eyes. With Crawl, Aja isn’t the only noteworthy name attached to the project. Sam Raimi, of The Evil Dead and Spider-Man fame, serves as producer. Needless to say, these names provide intrigue but Crawl also isn’t the first film to host killer alligators and/or crocodiles. There have actually been a ton of others. Films like Lake Placid, Primeval, and Rogue have all previously used the creatures as their natural antagonists to varying degrees of success. It makes sense due to their fierce look and instincts but there also has yet to be a definitive cinematic experience with gators or crocs.

Crawl follows a college swimmer named Haley (Kaya Scodelario). She receives a call from her sister, Beth (Morfyyd Clark), explaining that their recently divorced father, Dave (Barry Pepper), isn’t answering his phone. Despite a Category 5 hurricane making its way towards Florida, Haley decides to check on him. After not finding him at his apartment, she visits the old family home and discovers her father unconscious in the crawl space below the house. The storm picks up as an even bigger problem arises when Haley meets some deadly alligators also trapped in the crawl space. Haley and her injured father must then find a way to combat the alligators while also waiting out the hurricane.

When it comes to these natural horror films, you can’t always expect a lot from the plot. That being said, the plot for Crawl actually isn’t half bad. Sure, needing to get to the killer alligators is kind of ridiculous in theory but the screenwriters, Michael and Shawn Rasmussen, actually keep their story somewhat clever. The impending doom of a Floridian hurricane isn’t far-fetched. Similarly, Florida is gator territory so it’s not hard to believe that they’d look for refuge during a big storm as well. On the flip side of that, alligators don’t often attack people but, in the case of films like this, the suspension of disbelief is required at times. 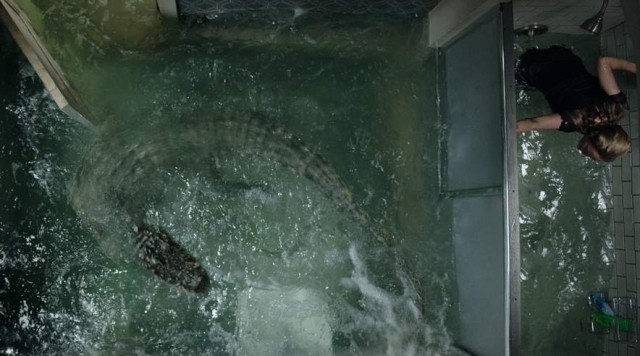 Another thing that’s commendable about Crawl is in its action. While the film takes a while to get going, its second half is allowed to have a little bit of fun. The alligator attacks are often predictable but mostly satisfying. Scenes such as the above pictured bathroom scene are enjoyable if somewhat uninspired. A similar scene was used in the 2003 Jason Lee/Julia Stiles comedy, A Guy Thing, that nobody saw. That’s just a strange connection to make but I digress. Then, there’s the climax that gets pretty wild in a ridiculous sort of way. Obviously, if you’re not expecting something ridiculous in a film about killer alligators during a hurricane, you’re probably seeing the wrong movie. Again, viewers will expect most of the thrills that the film offers up but they’re welcome during the film’s second half.

The cast of Crawl is pretty slim but everyone does an alright job. No one in particular really sticks out even though Barry Pepper and Kaya Scodelario’s father-daughter combo dominate the most screen time. They both are fine but their characters are written quite poorly. The film frequently goes into the history of the two and their fractured family which there’s some genuine intrigue behind. Yet, the Rasmussens decide to convey all of their family drama through exposition dump scenes where Dave and Haley blatantly tell each other (and the audience) about their issues. Most recently, there was a big exposition dump scene in Spider-Man: Far From Home that fans have lashed out against. Here, though, it seems like many people excuse these moments for some reason. Not to mention, there are far more of them in Crawl than in Far From Home. The only other characters seen throughout the film seem to only pop up when the plot needs some more background or some gator kills. In that regard, there’s not much else to say about the cast. 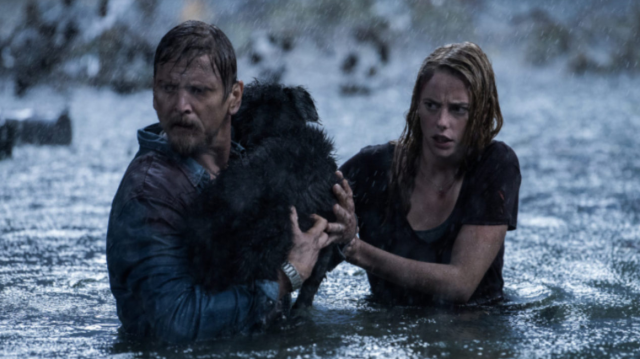 Where the film really falls short is in its overall storytelling and execution. You may find yourself scrolling back up to re-read about the plot not being half bad. It’s true that the plot isn’t half bad on paper but, in reality, it’s just a bumbling mess most of the time. The first half of the film is unbelievably slow and, once Haley finds her father, the characters reach a whole new level of stupidity. It seems that every time Haley and Dave deem themselves “safe,” they decide to go ahead and do the most unsafe thing imaginable next. First, they’re safe as long as they stay behind some pipes in the crawl space. Haley drops her phone so, instead of staying put, she sneaks out from the pipes to go retrieve her phone. After retrieving it, she races to get back behind the pipes, right? Nope. She sits out in the open and uses her phone to call 911. Every time these two make any kind of headway, they do something idiotic in the very next scene. Ultimately, this film consists of two very dumb people doing very dumb things in an unfortunate situation. Frankly, they deserve to die in this movie for all of the shenanigans they find themselves getting into.

It’s absolutely mind-blowing that Crawl is currently sitting at an 87% on review aggre-gator (sorry for that) Rotten Tomatoes. It’s incomprehensible that so many people look past the glaring issues with the film. Maybe it’s the big names making it, Alexandre Aja and Sam Raimi, or its interesting premise that have duped people into thinking it’s better than advertised but that’s simply untrue. It’s worse than advertised. The trailers made it look like a legitimate attempt at a killer animal film. In that case, Crawl does get by with a pass. The cast and crew did actually try to make it memorable. However, there are just far too many issues with its overall storytelling and dumb characters for Crawl to get a full recommendation. Yes, there’s some fun to be had but it comes between bouts of boredom, predictability, and, above all, stupidity.