Just as 2019 has been a bland year for film, there also hasn’t been a lot to talk about in terms of television either. Of course, The Walking Dead remains up to its old tricks in another slog of a season while the heavyweight Game of Thrones failed miserably at delivering a satisfying conclusion. Fox’s Gotham had its series finale but that show never really met its full potential. Even Netflix’s once lauded superhero shows have all been unceremoniously canceled. Luckily though, Netflix still has a little magic left in one of its most popular shows. It may have taken over a year and a half for Stranger Things Season 3 to premiere but it recaptures the drama, tenderness, and fun of the show’s first season after a wayward second outing.

Most people probably remember the events of the first season but, frankly, Season 2 is kind of foggy. Despite still doing some good things, it just wasn’t very memorable overall. That season saw the group of friends consisting of Mike (Finn Wolfhard), Lucas (Caleb McLaughlin), Dustin (Gaten Matarazzo), and Will (Noah Schnapp), trying to adjust to life following the supernatural terror they endured in Season 1. The telekinetic young girl, Eleven (Millie Bobby Brown), is hidden away by Hawkins Sheriff Jim Hopper (David Harbour) while everyone believes her to be dead. The two clash and Eleven joins up with a group of others with special abilities before returning to Hawkins and reconnecting with Mike and the others to save the town once again.

Luckily, Season 3 learns from some of the mistakes made in the previous season. In the summer of 1985, the new Starcourt Mall opens in Hawkins and is frequented by all of the characters. Hopper is concerned about the romance brewing between Mike and Eleven and struggles to find common ground with the young couple. Joyce Byers (Wynona Ryder) considers moving away after the trauma her and her two sons, Will and Jonathan (Charlie Heaton), have suffered. Things between the group of friends also begin to change as they grow up. Both Mike and Lucas are preoccupied with their respective girlfriends, Eleven and Max (Sadie Sink), as relationship issues arise. Will remains the most childlike as he wants things to be the same as they had been in previous years. In this regard, it’s as if he’s trying to hold onto some semblance of childhood after previously being stuck in the Upside Down.

Dustin returns from summer science camp but his friends don’t appear as excited as he is to see them. Therefore, he spends most of his time with Steve Harrington (Joe Keery) and his coworker, Robin (Maya Hawke), at the ice cream shop in the mall. They pick up some Russian code on Dustin’s transmitter and spearhead a mission to decipher the message and thwart Russian plans. Finally, Jonathan and his girlfriend, Nancy (Natalia Dyer), work at the local newspaper where Nancy is trying to break a big story about some strange occurrences. Though, Nancy is often teased by the crew for attempting to go above and beyond her responsibilities. 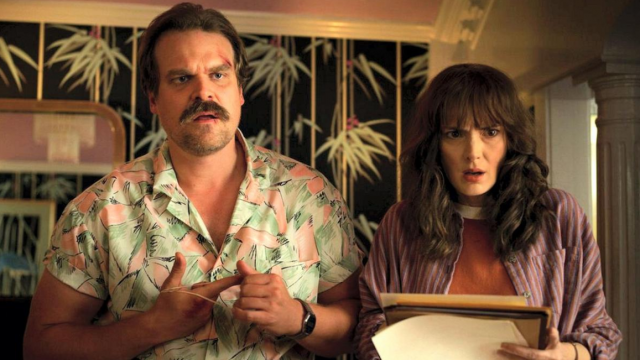 As you may be able to tell from the plot, there are a lot of characters and things going on in this third trip through Hawkins, Indiana. While some storylines are a little hokey (i.e. the Russian conspiracy), everything is eventually linked and brings the groups together. The main issue throughout the season is a supernatural entity, dubbed the Mind Flayer, essentially harvesting human bodies through Max’s brother, Billy (Dacre Montgomery). It has some interesting moments but the ever-changing focus of Season 3 often causes you to become distracted. Yet, the erratic plot is much more memorable than the previous season and viewers will find themselves actually caring about what each group of characters is currently doing.

That’s the biggest asset to Season 3 and Stranger Things in general: its characters. In this go-round, most of the characters are treated extremely well and given plenty of time to charm and entertain viewers. This is mostly because of the physical, mental, and emotional changes that the characters and the cast members in general go through. In the almost two year break between Seasons 2 and 3, the young cast has aged as have their characters. Some of them, especially Finn Wolfhard’s Mike, actually look different and creators, Matt and Ross Duffer, were smart to capitalize on their adolescence. The aforementioned storyline with Mike and Lucas chasing their girlfriends as opposed to playing Dungeons & Dragons with their childish friends, Will and Dustin, is something that many struggle with during young adulthood. It’s effective to see these issues tackled in a show that relies so heavily on friendship, trust, and brotherhood. 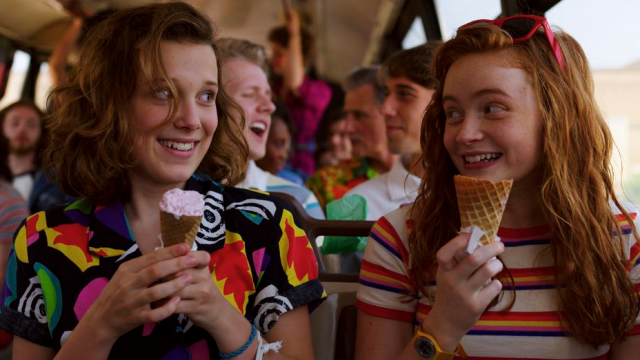 As per usual, Stranger Things is chocked full of 80’s nostalgia but it’s also more manageable here than in the previous season. In our Season 2 wrap-up, we criticized the show for being crammed with almost too much of the 80’s with its massive soundtrack and exploitative nature. Season 3 definitely reins in the 80’s sentiment with a modest, yet enjoyable, soundtrack. Also, instead of clobbering people with references, the nostalgia wave is more atmospheric than blatant. For example, the Starcourt Mall is loaded with throwbacks while also feeling real. In 2019, malls are nearly obsolete but, when on display throughout the show, there’s a fun and familiar feeling to the location.

Of course, there are some missteps in this third season of Stranger Things. While the introduction of new characters like Robin and an expanded role for Lucas’s sister, Erica (Priah Ferguson), are praiseworthy, there are others that fall a bit flat. Cary Elwes feels somewhat underused as Hawkins’ mayor. Then there’s the inclusion of the Terminator-like Grigori (Andrey Ivchenko) which has little explanation or payoff. One of the most unfortunate issues is in the handling of some long running characters. Jonathan and Nancy’s storyline is easily the blandest aspect of this season despite being the genesis of the new “big bad.” Also, Hopper and Joyce have moments where they’re simply unlikable. This is moreso a critique on Harbour’s Hopper who is painted in a negative light for much of the season. Fortunately, he has a redemption arc but it’s hard to say whether the Duffer brothers were actually trying to make him unlikable or if Harbour’s performance was the issue. There’s also a complete lack of the Upside Down which was featured so heavily in previous seasons. Here, it’s never explicitly mentioned nor is there very much of it.

For the most part, though, Stranger Things Season 3 feels like a show that has finally found its own identity. The previous seasons were constant reminders of Stephen King but this new one seems to shed King’s specter. It does dabble in other popular films like The Terminator and Star Wars but it’s slightly less obvious. It’s intriguing to see these young stars grow separately and together as the show continues. Without doubt, the cast and their relationships with one another are what keep people coming back. Sure, there’s a sentimental value to the time period and a lot of fun to be had within it. Something like that only goes so far though. These characters are truly some of the best to grace the small screen in quite some time and, undoubtedly, the cream of the crop in 2019. If you enjoyed either of the previous two seasons, there’s no reason you shouldn’t be watching Stranger Things Season 3.