Even in the golden age of superhero films, every film can’t be a success. For every Wonder Woman or Avengers: Infinity War, there’s a Suicide Squad or Venom. Yes, many have cashed in on the recent superhero craze over the past decade or so and we’re even nearing the point where remakes and reboots of pre-2008 films are coming out. Of course, we’ve already had a few different versions of Spider-Man and the X-Men. Now, there’s another one to talk about as we balance out the commendable Shazam! with the deplorable 2019 version of Hellboy.

The character was created by Mike Mignola and first appeared in San Diego Comic-Con Comics #2 in 1993. Hellboy is a half-demon who was summoned from Hell by Nazi occultists. Though, he was discovered by the Allies and taken in to be raised by Professor Trevor Bruttenholm. Oscar winning director Guillermo del Toro brought the character to the big screen in 2004’s Hellboy and again in 2008’s Hellboy II: The Golden Army with Ron Perlman in the lead role. Del Toro’s films have long seemed to hold a special place in the hearts of fans. Though, they don’t necessarily age very well especially given the current state of superhero films. In fact, this new film started out as a sequel. However, Perlman refused to return due to del Toro’s lack of involvement and an R-rated reboot became the new goal.

The film opens with the Blood Queen Vivian Nimue (Milla Jovovich) unleashing a plague upon medieval England. King Arthur (Mark Stanley) uses his sword, Excalibur, to end the plague by dismembering the Blood Queen. Fast forward to modern day Tijuana where Hellboy (David Harbour) tracks down a missing agent from the Bureau of Paranormal Research and Defense. He discovers that the agent has been turned into a vampire and, upon killing him, the agent tells Hellboy that “the end is coming.” Hellboy returns to the B.P.R.D. where he’s tasked by his adoptive father, Professor Bruttenholm AKA Broom (Ian McShane), to assist in the Osiris Club’s Wild Hunt for three giants. Hellboy is betrayed by the Osiris Club before reuniting with someone from his past in Alice Monaghan (Sasha Lane). Soon, Hellboy, Alice, Professor Broom, and M11 Agent Ben Daimio (Daniel Dae Kim) discover a hog-like creature named Gruagach is locating the dismembered body parts of the Blood Queen to put her back together again. Additionally, the Blood Queen intends to use Hellboy to bring about the apocalypse.

This is one of those films where you can tell that things aren’t going to go well just by reading the nonsensical plot. There’s so much unnecessary “stuff” shoehorned in. The progression of the plot is so episodic in its structure to the point that you’re never really sure how the characters even make it from one scene to another. The film also employs the dreaded location intertitles to show that the characters have traveled. In regards to Hellboy, the entire story is just poorly told in general. Again, there’s just so much stuff going on that it’s hard to care about any of it in the least. If you’re going into this film looking for a good story, you’ll be greatly disappointed. 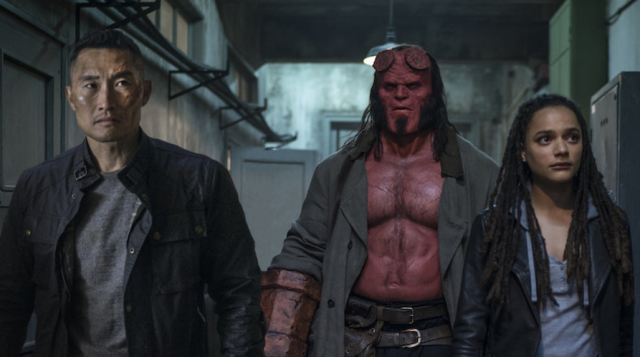 On a similar note, if you’re going into Hellboy for some cool characters, you’ll be somewhat let down as well. The cast of supporting characters is a bit of a mixed bag and it’s not because of the actors. Characters like Sasha Lane’s Alice and Daniel Dae Kim’s Ben have interesting things about them but the script doesn’t give them much to work with. They each get their respective moments to shine but it’s mostly when the script finds it convenient for them to do so. Ian McShane as Professor Broom is classic Ian McShane. Again though, the script doesn’t do him any favors and viewers will find themselves liking his character because he’s Ian McShane and not because Broom is that good of a character in this film. Luckily, there are some decent personalities in Milla Jovovich’s Blood Queen and her henchman, Gruagach. Gruagach, portrayed by Douglas Tait and voiced by Stephen Graham, is highly entertaining and offers up some decent comedy during his screentime. Other creatures like the three giants and Baba Yaga (Troy James and Emma Tate) provide some bloody fun as well.

This brings us to David Harbour as Hellboy. It’s surprising to see that he has received quite a bit of praise for his portrayal. He’s not bad but he’s definitely not very good either. He’s nowhere near as charismatic as Ron Perlman in the 2004 and 2008 films. There are far too many scenes where he’s yelling for seemingly no reason as if he’s trying to express emotion. Then, in others, he’s spouting off pathetic one liners that aren’t actually shown onscreen. There’s a good chance that this is something the studio decided to add in in post production. It’s odd that Hellboy is rarely shown delivering a joke and, instead, you hear them during a transitional shot in the film. Due to the film’s balance of horror and comic books, it’s likely this was done to lighten the mood. All it does, though, is cheapen the already mediocre experience that is Hellboy 2019. 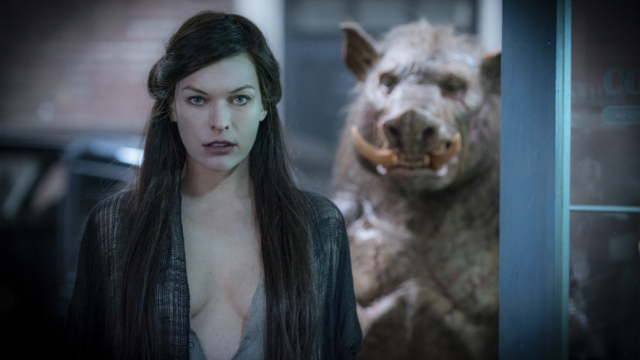 Now, the film isn’t all bad (just mostly). When the convoluted and completely uninteresting story isn’t rearing its ugly head, there’s actually a lot of solid comic book action to enjoy. It’s a far cry from anything that Marvel and DC have been putting out as it’s more in line with something like Sin City instead. The R rating is definitely earned through a ton of gore and bad language. The aforementioned Gruagach is probably the most vulgar character in the film and is different than most superhero villains. Other creatures in the film like Baba Yaga, Camazotz (Mario de la Rosa), and the giants enhance their scenes with a lot of blood, guts, and gross out gags. The action scenes are what make Hellboy tolerable but they just can’t correct all of the other faults.

Unfortunately, Hellboy doesn’t come recommended. Yet, you can tell that the people involved really did try to make an enjoyable final product. Something just didn’t click with all of the cast and crew. The story tries to do way too much while barely accomplishing anything. The script kills any enthusiasm from the performers and some of the acting just isn’t up to par regardless. Even with its gore, foul mouthed characters, and nifty creature design, Hellboy is a largely forgettable affair. That’s saying something in a year chocked full of disappointment and without a truly great film released here in 2019.