As we’re all aware by now, Disney loves to make money. They’re actually quite good at it too. They already have a film that has surpassed the $2 billion mark at the box office in Avengers: Infinity War and we’re only halfway through the year. Even this year’s addition to the Star Wars Anthology spin-offs, Solo: A Star Wars Story, grossed over $350 million worldwide despite actually losing money against its production budget. Similarly to Disney, Pixar has proven a pretty solid track record in terms of making money as well. The two team up once again to deliver a sure moneymaker in the long awaited animated superhero sequel, Incredibles 2.

Shockingly, it has been fourteen(!!!) years since The Incredibles was released. As fans have discussed a possible sequel to the 2004 film for years, there was never any indication that it wouldn’t happen. Writer/director Brad Bird has been open over the years about a followup as well despite the difficult production of the first film. Many of the challenges that plagued The Incredibles, such as animating humans, have since been hammered out over the years by the studio. However, it wasn’t until 2014 that it was announced that Incredibles 2 would officially happen.

The film kicks off immediately where the first ended with the Parr family, consisting of Bob (Craig T. Nelson), Helen (Holly Hunter), Dash (Huck Milner), Violet (Sarah Vowell), and Jack-Jack (Eli Fucile), as the Incredibles, battling the Underminer (John Ratzenberger). Unfortunately, they’re unable to thwart the Underminer’s bank robbery and are immediately called into question due to the destruction caused during the battle. Government agent and friend, Rick Dicker (Jonathan Banks), informs the Parrs that the Super Relocation program is being shut down and all superheroes must, once again, abandon their secret identities.

Soon after, Bob/Mr. Incredible, Helen/Elastigirl, and their friend, Lucius Best/Frozone (Samuel L. Jackson) are contacted by Winston Deavor (Bob Odenkirk), an admitted superhero fan. Winston and his sister, Evelyn (Catherine Keener), propose a publicity stunt to put superheroes back into a positive light. They believe Elastigirl to be the most marketable of the Incredibles. This upsets Bob who must then take on homemaker duties as Helen is out fighting crime. At this same time, a new supervillain named the Screenslaver emerges. The Screenslaver uses hypnosis via hacked screens to influence and control people. 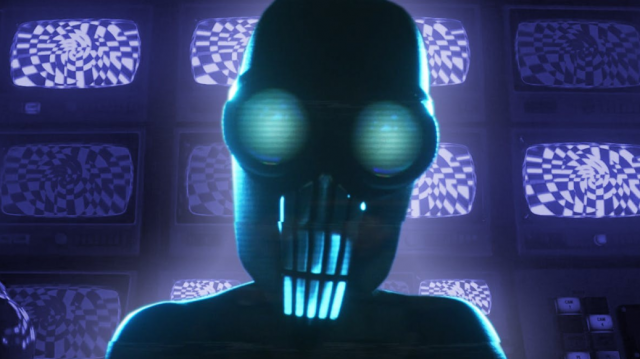 Firstly, after such a long period in between films, it’s nice to see the core voice cast as well as director Brad Bird return for Incredibles 2. Craig T. Nelson, Holly Hunter, Sarah Vowell, Eli Fucile, and Samuel L. Jackson are the main cast members to reprise their roles. The only original cast member to not return from the Parr family is Spencer Fox as he’s replaced by the younger Huck Milner. Even John Ratzenberger voices the Underminer who essentially appeared in a brief cameo at the end of the first film. As for new additions to the cast, both Bob Odenkirk and Catherine Keener do an excellent job as the brother/sister team of Winston and Evelyn Deavor. Odenkirk’s Breaking Bad and Better Call Saul co-star, Jonathan Banks, takes over the role of Rick Dicker following the retirement of Bud Luckey in 2014. Unfortunately, Luckey passed away in February of this year and the film is dedicated to his memory.

When compared to the first film, Incredibles 2 arguably has the better overall story. The idea of the 2004 film is that superheroes are banned but the rise of a supervillain thrusts the Incredibles back into their crime fighting ways. The second doesn’t stray too far from that formula which may feel like familiar territory but it does work here. The Screenslaver storyline trumps that of Syndrome from the original. In 2004, superhero films had’t been done to death and, basically, The Incredibles used many of the typical superhero tropes. Since then, superheroes have dominated popular culture and the box office. A villain hypnotizing audiences via screens is essentially a parody of today’s society in the same way that George A. Romero’s Dawn of the Dead spoofed consumerism. The film also strays away from the typical “end of the world” scenario that has dominated superhero movies as of late. 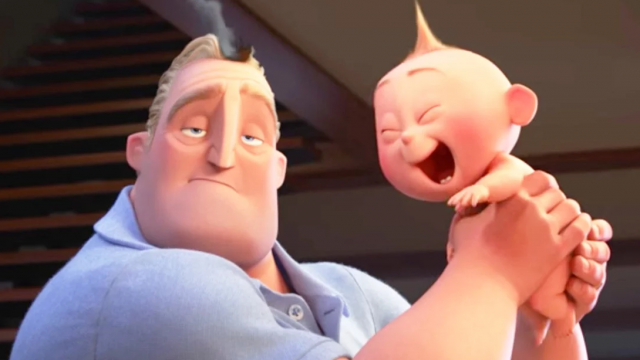 The best thing about Incredibles 2, though, is the Parr family dynamic. This was also the crux of the first movie. After fourteen years, the filmmakers and cast nailed this once again. The first film is more about Mr. Incredible’s desire to fight crime where this one turns that on its head to make Elastigirl the “breadwinner.” Bob resorts to life as a stay-at-home father raising his three young children. He struggles while helping Dash do his math homework as well as figuring out how to manage Jack-Jack’s emerging powers. He also tries to get Violet another date with her crush after Dicker erases his memory. The interactions between all of the characters are unbelievably charming and also very funny throughout the entire film. In most cases, the action isn’t the most memorable aspect of Incredibles 2. It’s the characters and their relationships that make the film.

There’s really not much else to say about Incredibles 2. It’s another hit from Pixar and it makes good on the fourteen year gap from its predecessor. Though, it seems like Dash takes a slight step back which is unfortunate as the rest of the characters are balanced so well. When stacked up to other Pixar films, it’s as good as the first but falls just short of the gold standard films like Toy Story and last year’s Coco. It’s still a ridiculously fun ride with a lot of laughs and it sets itself apart from the other superhero films of today. What else did you expect? It’s Disney. It’s Pixar. Go see it.