Sometimes in Hollywood, it’s shocking how many chances are given to big budget franchises. Of course, there must be some sort of monetary reason to do so. Franchises like Transformers and Terminator have gotten the sequel treatment far too many times while films like The Girl with the Dragon Tattoo had to abandon its director and lead actors to get a sequel seven years after the fact. Then, you have a series like Jurassic Park. Obviously, the first film was a massive hit which spawned two direct sequels that subsequently suffered massive drops in quality. The series was resurrected in 2015 with Jurassic World which pulled in its own boatload of money which called for the inevitable sequel. Last week, we received the followup, Jurassic World: Fallen Kingdom, and what a glorious mess it is.

After the huge success of Jurassic World, writer/director Colin Trevorrow stepped down as director for the sequel and, instead, serves as executive producer along with Steven Spielberg. Spanish director J.A. Bayona takes the reins for Jurassic World: Fallen Kingdom. Bayona has certainly proven himself to be a capable director with films like The Orphanage, The Impossible, and A Monster Calls. Yet, his keen eye and direction don’t save Fallen Kingdom from all of its other issues.

The film opens six months after the events of Jurassic World. A team of mercenaries hunts down the remains of the Indominus rex at the bottom of the theme park’s lagoon. They retrieve a bone from the Indominus and narrowly escape the attacking Mosasaurus and Tyrannosaurus rex. Three years later, there’s talk of sending a team to Isla Nublar to save the remaining dinosaurs after the island’s dormant volcano suddenly becomes active. Dr. Ian Malcolm (Jeff Goldblum) maintains his stance that this is nature’s way of correcting itself. 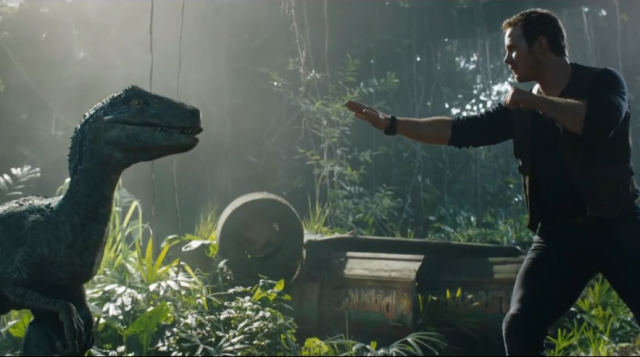 Now, if you’ve been a fan of the Jurassic Park and World movies, you may be a bit confused by that plot outline. You may recognize John Hammond’s name but who’s Ben Lockwood? Did any of the other movies ever address a dormant volcano? You’re not alone as Jurassic World: Fallen Kingdom loves to throw in new plot ideas with no rhyme or reason. While the dormant volcano is actually addressed in Michael Crichton’s original novel, it hasn’t been used as a plot device in any of the films. In addition, are we as viewers really supposed to take the Ben Lockwood character seriously? Richard Attenborough’s John Hammond is the creator of Jurassic Park. You can’t just throw another character in 25 years later and say that he also helped create it. This is simply bad storytelling all around.

The characters have never really been the strong suit of the franchise but, once again, they’re just there in Jurassic World: Fallen Kingdom. Not only that but they’re all pretty gullible too. From the very beginning, you can tell who the villains are even though they’re trying to pull the “wolf in sheep’s clothing” gimmick. Chris Pratt and Bryce Dallas Howard are fine in their roles but, like Jurassic World, there’s little chemistry between them. Jeff Goldblum’s return is a glorified cameo limited to two scenes. The script didn’t do the actors any favors either with some of the horrible lines the actors spout off. Perhaps the worst comes at the end of the film during a character’s correlation between herself and the dinosaurs. It’s supposed to be an emotional moment that becomes eye-rolling with the dialogue. 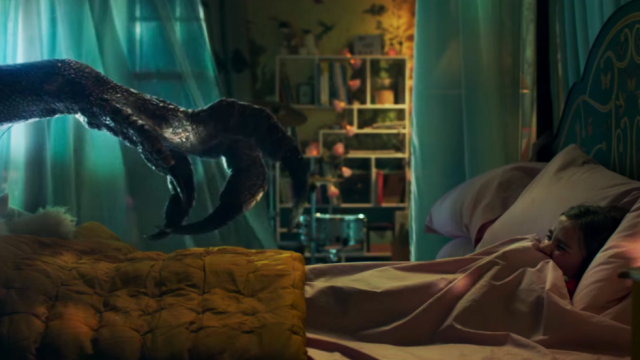 Jurassic World: Fallen Kingdom isn’t all bad though (just mostly). J.A. Bayona brings a darkness and atmosphere to the film that the others haven’t been able to grasp. At times, Fallen Kingdom actually feels like a horror movie which, in all honesty, is what these films should be. We previously mentioned Bayona’s keen eye and it’s on display here. There are two very powerful scenes in particular that are easily the best things in the movie. One scene depicts a lone brontosaurus standing on the edge of Isla Nublar as the island meets its demise. The other is towards the end of the film where a number of dinosaurs are trapped. Of course, this review is spoiler free so we’ll leave it at that. Yet, it’s kind of telling that the most emotionally complex characters in this film are a batch of CGI dinosaurs.

Ultimately, Jurassic World: Fallen Kingdom is a flat attempt at continuing the franchise. It introduces absolutely nothing original and it tries to add in new wrinkles to an already established story in some of the worst ways possible. Even Bayona’s direction couldn’t get past the awful script written by Colin Trevorrow and Derek Connolly. Is this the worst film ever made? No. Is it even the worst film of the entire Jurassic series? No, that honor would definitely go to Jurassic Park III. However, it’s just so devoid of originality and intrigue. On top of that, it’s just boring most of the time. While Jurassic World made a ton of money it was at least a perfectly watchable summer blockbuster. With Jurassic World: Fallen Kingdom, it’s sad to think about how much money it will make and how we still haven’t seen the last of this franchise.