Kevin Smith is a polarizing figure but not in the way one is usually polarizing. No, Smith has become a pro at alienating his own audiences and tarnishing his own legacy. Sure, the writer/director himself would respond to that with, “what legacy?” but Smith is a beloved cult filmmaker and his fans have stuck with him for his entire career no matter what nonsense he cooks up. While most people will look at his glory days as the director of Clerks, Chasing Amy, and Dogma, you simply can’t disregard mammoth flops like Jersey Girl, Cop Out, and Yoga Hosers. Looking to revisit his early years, Smith resurrects his fan favorite stoners in his new film, Jay and Silent Bob Reboot.

The characters of Jay and Silent Bob are, arguably, Smith’s greatest cinematic creation. Played by Jason Mewes and Smith respectively, the two lovable drug dealers first appeared in 1994’s Clerks in supporting roles. Their roles expanded in Mallrats the following year along with Dogma in 1999. They also appeared in Chasing Amy but only in a bit role. It wasn’t until 2001 where the duo got thrust into starring roles in Smith’s star studded Hollywood production  of Jay and Silent Bob Strike Back. Due to Jason Mewes’ continuing drug problems, Smith intended this film to be the last of his “View Askewniverse” featuring the characters. Though, Mewes eventually got his drug problems under control and the two returned in 2006’s Clerks II before this new film.

Jay and Silent Bob Reboot opens at the Quick Stop convenience store in New Jersey. Jay (Mewes) and his hetero life mate, Silent Bob (Smith), are arrested for growing marijuana in the old RST Video Store now disguised as a chicken sandwich restaurant. Lawyer Brandon St. Randy (Justin Long) gets their case dismissed but double crosses the two into signing their names away to Saban Films who are rebooting the cult classic superhero film, Bluntman and Chronic. Jay and Silent Bob visit their old friend, Brodie Bruce (Jason Lee), and find out about the reboot. From there, they decide to travel to Hollywood (…again) to stop the reboot from being made (…again). Their destination is Chronic-Con, a fan convention dedicated to the film. On the way, they meet characters new and old including Millennium AKA Milly Falcon (Harley Quinn Smith) and her friends who intend to attend Chronic-Con themselves.

In what has been a continuous 2019 trend, Jay and Silent Bob Reboot is another film with a nonsensical plot. While it’s true that the plot of Strike Back was dumb, at least there seemed to be a logical progression and story. That’s not the case with Reboot. It tries to follow the same beats as its predecessor but, somehow, gets lost constantly. It’s kind of shocking because Smith himself said that Reboot is a ripoff of Strikes Back so it’s strange that he fails to follow his own formula. Ultimately, the plot of this film doesn’t matter. It’s best to just watch it as segments of character interaction. 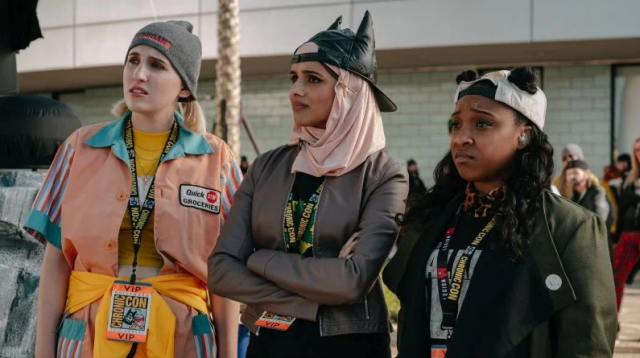 In this regard, the film is alright. Jason Mewes and Kevin Smith as Jay and Silent Bob have an undeniable chemistry as usual. No matter the quality, the duo is always a welcome sight. Of course, there’s the usual band of Kevin Smith alum making cameos all over Reboot. Jason Lee apparently fell off the Earth but crawls his way back to re-enact his Strike Back scene as Brodie. Though, it’s odd that he didn’t also appear as Banky Edwards especially with another talent returning who we’ll mention shortly. Similarly, Shannon Elizabeth reprises her role as Jay’s love interest, Justice, after being away from the spotlight for some time. Brian O’Halloran is a welcome addition as he pulls double duty as both Dante and Grant Hicks. It’s also amusing to see Jason Biggs, James Van Der Beek, and Diedrich Bader returning from Strike Back despite not serving a ton of purpose. Anyone with knowledge of the falling out between Smith and Ben Affleck will be happy to see the latter return as Holden McNeil of Chasing Amy. In all honesty, Affleck actually steals the show with his heartwarming throwback performance as the character.

On the flipside of this, there are some things about the film that just don’t work. The first is Milly’s misfit batch of friends. Smith’s real-life daughter as Milly is decent. She has a few standout moments with Mewes where you can see that she has talent. Smith began putting his daughter into his films with Jay and Silent Bob Strike Back and has given her starring roles in both Yoga Hosers and this new film. While she definitely has some chops, it’s fair to wonder if someone else could’ve consistently brought more to the role. Then, you have Milly’s friends, Jihad (Aparna Brielle), Soapy (Treshelle Edmond), and Shan-Yu (Alice Wen). These characters are complete throwaways. No, none of the girls do a bad acting job but they lack any kind of weight or importance in their roles despite Smith attempting to showcase them. Needless to say, he doesn’t do a good job of it.

The comedy throughout the film doesn’t really work either. Whereas Strike Back was chocked full of quotable lines and gags, Reboot has very little that’s memorable about it. Smith has often been the master of quotable screenwriting but it’s hard to think of anything fans will latch onto with Reboot. Mostly anything humorous is just ripped off from Smith’s other films which makes it feel more lazy than anything else. However, the one genuinely funny line occurs in a post credit scene where the cause for the bane of Dante’s existence is finally revealed. It’s difficult to figure out what happened to Smith’s smart and punchy screenwriting. His life performances and podcasts show that he’s extremely charismatic and quick witted but his writing says the complete opposite at this stage of his career. While Jay and Silent Bob Reboot may not be the worst thing he has ever written, it feels very uninspired despite Smith’s supposed passion for the project. 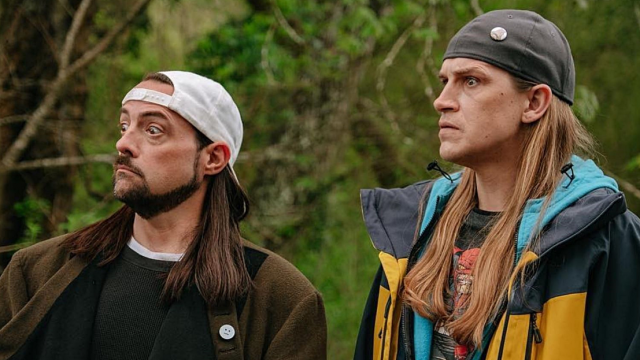 The lone reason that people will enjoy this film is for the same reason that Smith made it: nostalgia. It’s obvious that there’s a love for this world and these characters but the creativity just isn’t there anymore. It’s a film built entirely on the past. Whether it’s the characters, story, jokes, or simply a desire to relive the glory days, Jay and Silent Bob Reboot is unapologetic about its unoriginality. As an homage to everything that got Smith to the point in life that he’s at, the film is a triumph. There’s something very heartfelt about the film and the cast and crew probably had a legitimately great time making it. Yet, the product onscreen is a very bland, unfunny, and sad one.

Kevin Smith comes across as a very humble filmmaker and personality. He’s the kind of guy you want to root for because of how likable he is. To this day, he still puts out a ton of great content with podcasts like Hollywood Babble-On and Fatman Beyond. When it comes to filmmaking, his best days seem to be long behind him. Again, there’s something genuine about Jay and Silent Bob Reboot but, unfortunately, that doesn’t make it good. Thirteen years ago, we got Clerks II which was littered with the same passion and homages leading to a much better result. It’s too bad that after all this time, Jay and Silent Bob Reboot was all that Smith had up his sleeve. With Clerks III supposedly in the works next, hopefully Kevin Smith can reclaim some former glory. Though, it’s probably not a good bet to hold out too much hope for that either.