There’s something to be said for characters that can stand the test of time in media. Classic horror villains like Dracula and Frankenstein’s monster all the way to the superheroes that everyone loves today have transcended generational gaps and cultural change. Even if you’ve never seen a single one one of their films or read their books, you still know who/what they are. Perhaps no character is more distinguishable by name than King Kong. Kong is one of film’s original movie monsters and, now in 2017, he returns once more in Kong: Skull Island.

The character first appeared in the 1933 film King Kong. The film is a landmark in special effects as the filmmakers used stop motion animation, miniatures, matte painting, and rear projection. These effects were all achieved in a day and age without CGI and the film is truly amazing. If you haven’t seen it, then shame on you. In the 84 years since the original’s release, there have been a number of sequels, spin-offs, and remakes. The film was first remade in 1976 and again in 2005 by Peter Jackson of The Lord of the Rings fame. The remakes both stuck to a very simple story in which a giant ape is captured and brought to New York City as an attraction. He breaks free and ascends a building (the Empire State Building or World Trade Center) before being taken out by the military.

Kong: Skull Island is definitely a reboot for the character but is not a remake of the original film. Though, some of the ideas are similar. A team of scientists headed by Bill Randa (John Goodman) and Houston Brooks (Corey Hawkins) prepare an expedition to an uncharted island in the Pacific Ocean following the Vietnam War. They enlist the aid of a helicopter squadron led by Preston Packard (Samuel L. Jackson), British Special Air Service Captain James Conrad (Tom Hiddleston), and war photographer Mason Weaver (Brie Larson).

Upon their arrival to Skull Island, they are immediately confronted by the massive ape known as Kong. The team is separated and they must regroup and make it to their rendezvous point on the other side of the island. Packard makes it his goal to kill Kong after their initial battle with the giant ape. Along with Kong, they must avoid other creatures along the way including the monstrous Skullcrawlers. They also meet Hank Marlow (John C. Reilly), a fighter pilot who crashed on the island during World War II. Marlow is basically the comic relief of the film but is also the most likable character. 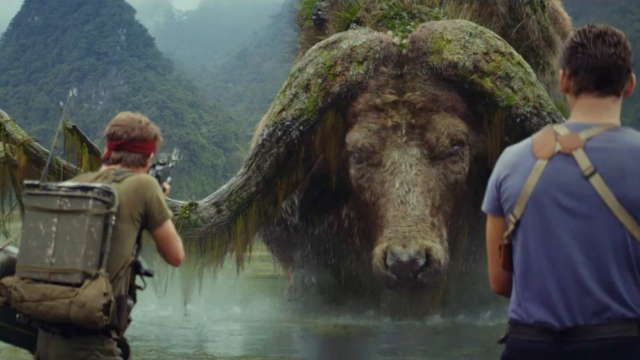 In terms of storyline, there really isn’t much more to the film than that. It’s your standard monster movie in which human survival is the main motivation. Essentially, the filmmakers added in more characters for the creatures to pick off instead of adding more plot. In this case, it mostly works. After all, the majority of audiences are mostly there to see Kong as opposed to a bunch of human characters.

The closest Kong: Skull Island gets to having true protagonists are with Tom Hiddleston and Brie Larson’s characters. While they’re not all that fleshed out, they are definitely the outcasts of the group. Conrad is a tracker hired to map the island while Weaver is there to get photographic proof that monsters exist. Though, neither Conrad or Weaver agree with Packard’s goal of taking down Kong. None of the characters in the film are necessarily likable nor are they unlikable. They’re mostly vehicles to keep the plot moving along. Like the character of Ann Darrow from the 1933 and 2005 films, Weaver and Kong have a sort of mutual attraction to one another. Though, their “relationship” doesn’t reach the heights (no pun intended) of their predecessors. 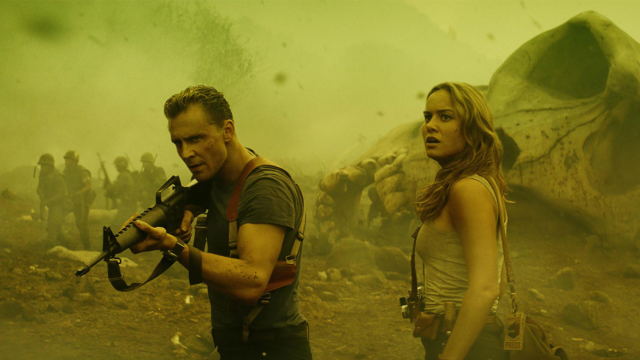 As previously mentioned, Kong is the star of this film and he is absolutely massive. For as physically imposing as he is, it’s easy to sympathize with him as his territory is being invaded. The special effects used to create all of the creatures are quite impressive and it’s a lot of fun to watch them fight each other. The cinematography works perfectly for the film. Even though you know the creatures aren’t real, they feel like they belong in the world of the film. Also, for a PG-13 movie, it is quite violent and bloody. This isn’t something that you’d want to bring a young child to. The action is worth the price of admission itself and, again, it’s just a lot of fun to watch.

Overall, Kong: Skull Island had one goal and it certainly achieved it. The film was built to reintroduce the character in 2017 for an inevitable showdown with Godzilla. Both properties are owned by Legendary Pictures and it was obvious even before seeing the film that this is the route they plan to take. Despite its surprisingly lackluster characters from a very solid cast, the film is still the most fun you’ll have at the movies during a dry period of the year. Ultimately, Kong: Skull Island won’t blow anyone away but it’s an enjoyable way to burn two hours.