When it comes to holidays, there are movies made for seemingly every one of them. While Halloween and Christmas are understandably the most represented holidays in film, even ones like April Fool’s Day have gotten a few of their own features. It’s somewhat surprising then that St. Patrick’s Day is rarely used as a backdrop. Other than Troy Duffy’s The Boondock Saints, there’s only one series that immediately brings the holiday to mind: Leprechaun.

Yep. The horror franchise that features a small, hideous, green man killing people who are after his pot of gold is the best that cinema has to offer for St. Patrick’s Day. Leprechaun was first released in 1993. None of the films have been received all that well but the series has become a cult classic. Warwick Davis plays the titular Leprechaun in the first six films while Dylan Postl AKA Hornswoggle of WWE fame took over as a new Leprechaun in 2014’s Leprechaun: Origins. Since Origins has absolutely nothing to do with the other films, it will not be included on this list.

While the bar is set pretty low on this franchise in general, there are some redeeming factors. There are plenty of great kills through magic and trickery. Also, Davis is great in the role and he’s legitimately funny in most of the films. Though, we’re going to kick off our list with a film that has absolutely no reason to exist. 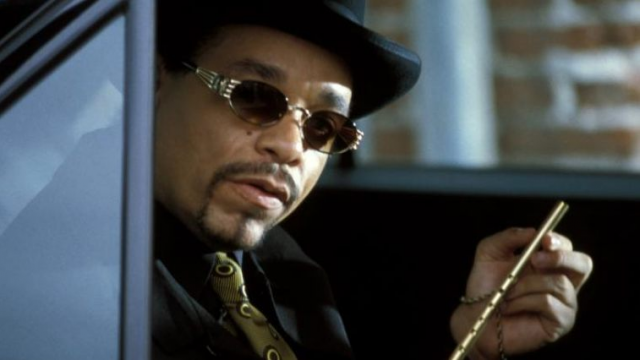 Oh yeah. If you’re not familiar with the franchise, that is the real title of the fifth film in the franchise. Record producer Mack Daddy O’Nassas (Ice-T) imprisons the Leprechaun in stone after stealing his magic flute for financial gain. Three aspiring rappers, Postmaster P. (A.T. Montgomery), Stray Bullet (Rashaan Nall), and Butch (Red Grant) accidentally set him free and the Leprechaun goes on a killing spree to retrieve his flute.

One of the first criticisms of this film is with the magic flute. It was never used as a plot device in any of the previous installments. Usually, a character steals a pot of gold and is granted three wishes although the wishes tend to be skewed with dire consequences from the Leprechaun. There honestly isn’t much to say about this film in general. It’s complete and utter trash. Even with how stupid the plot is, you’d think that there’s fun to be had but there isn’t. It’s bewildering that Ice-T signed on for this movie considering that he went on to have a recurring role in Law & Order: Special Victims Unit that same year. As the Leprechaun himself puts it into song, “Lep in the hood come to do no good.” That’s an understatement for this awful movie. 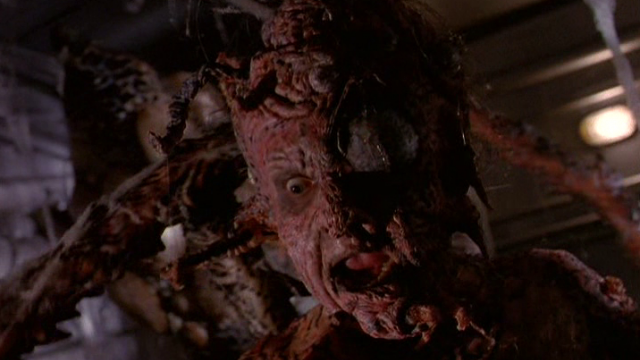 Before going to the hood, the Leprechaun was in space. While we can assume that the chronology of this one is a bit off, it doesn’t matter because it’s almost as bad as its successor. After agreeing to marry Princess Zarina (Rebekah Carlton), the Leprechaun is killed by a group of space marines. One of the marines urinates on the corpse and the Leprechaun’s spirit travels up the stream into the marine’s penis. The Leprechaun is later reborn from the marine’s penis and our world is a sadder place because of it. Meanwhile, the ship’s cyborg commander, Dr. Mittenhand (Guy Siner) plans to use Zarina’s DNA to regenerate his body. Of course, a killing spree ensues as the Leprechaun’s murderous rage takes over the ship.

In Space is filled with hokey acting, atrocious special effects, and pathetic attempts at comedy. While these films do have a certain camp factor to them, this one just takes it too far. Though, the closest thing to true horror that’s seen throughout the series happens in this film when Dr. Mittenhand is injected with Zarina’s DNA mixed with a scorpion and tarantula. He turns into the nightmarish creature pictured above and he’s uncomfortable to watch in the role in general. In Space was Brian Trenchard-Smith’s second go-round as director after performing the duty in the equally goofy but much better Leprechaun 3. Jessica Collins was cast as the lead in the film but she’s not too memorable. As we all know, horror franchises go to space to die and it would be four years before another Leprechaun movie saw the light of day after this one. 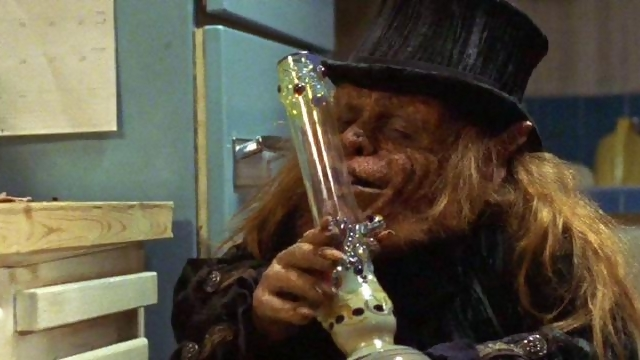 What’s worse than Lep being in the hood? Well, heading back to the hood certainly wouldn’t have crossed many minds after how poorly received the first trip was. Yet, it happened. In 2003, the Leprechaun had another bloodsoaked encounter in the ghetto. This time, four friends discover a pot of gold hidden in a tunnel from the Leprechaun’s earlier encounter with a priest who banished him from Earth. The friends divvy up the gold between themselves and, of course, the Leprechaun returns to reclaim his gold.

Back 2 tha Hood features more of the stupidity of its predecessor. The Leprechaun smokes marijuana and even kills someone with a bong. Unsurprisingly, you never get a chance to attach yourself to any of the characters and, again, even though all of these films are stupid in their own right, these most recent three just took the B-movie feel way too far. There isn’t much setting apart films 4-6 on our list as none of them are amusing, fun, or worth watching whatsoever. However, we’re about to get to the better films in the series and these ones actually are worth watching if you’re a fan of horror-comedies. 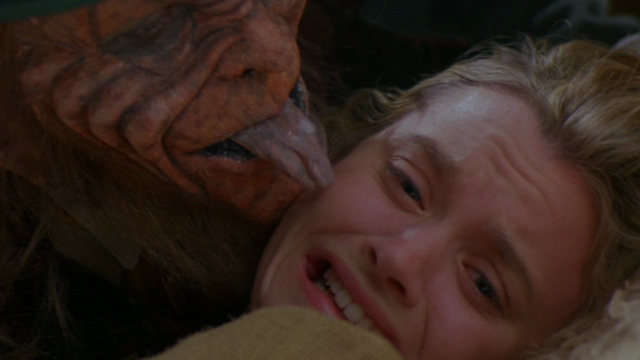 Leprechaun 2 features our favorite wee Irishman seeking out a bride on his 1,000th birthday. All he needs to do is cause his bride-to-be to sneeze three consecutive times without anyone blessing her. Unfortunately, the Leprechaun’s slave, William O’Day (James Lancaster), denies him his bride and the Leprechaun vows to wed O’Day’s descendant 1,000 years later. From here, we meet the protagonists of the film, Cody (Charlie Heath) and Bridget (Shevonne Durkin). After the Leprechaun emerges from a tree in Los Angeles (don’t ask), he kidnaps Bridget who’s the descendant of the O’Day family. Cody and his alcoholic uncle, Morty (Sandy Baron), do their best to outsmart the Leprechaun to get Bridget back.

This was the last film in the series to receive a theatrical release. The subsequent installments were all direct-to-video releases. It’s not hard to understand why but, in all honesty, Leprechaun 2 feels like a real movie at least. Cody and Bridget are relatively likable characters but Morty is the real star here. He’s a greedy, scam artist who thrives on manipulation which makes him a perfect foe for the villain.

The film also furthers the lore behind the character and adds some new wrinkles to the series. It does buck continuity slightly with the Leprechaun’s age as he proclaimed he was 600 years old in the first film but is 2,000 in this one. Nonetheless, the second film in the franchise is imaginative with solid characters and some pretty cool kills. The best one comes from a pair of lawnmower blades. Unlike the previous three entries on this list, this one is worth giving a shot.

While the last film felt like a legitimate attempt to further the franchise, Leprechaun 3 takes the things that people love about the character and turn them up a notch. This time, the Leprechaun is terrorizing Las Vegas and it’s as ridiculous as it sounds. Frozen in stone, the Leprechaun is unceremoniously sold to a pawn shop. The owner doesn’t heed the seller’s advice and removes a medallion from the statue which releases our antagonist. Meanwhile, a college student named Scott (John Gatins) falls for Tammy, a magician’s assistant at a casino. After losing all of his money for school at the casino, Scott goes to the pawn shop to sell his grandfather’s watch only to find the shop owner’s dead body and a gold coin from the Leprechaun’s pot of gold that grants its owner one wish.

Throughout the film, the coin passes from character to character. Being Las Vegas and set mostly within the casino, most of the characters are despicable and steal the coin from each other. As you can imagine, their greed gets the best of all of them and they suffer some of the most brutal deaths of the series with their desire being their ultimate downfall. Leprechaun 3 is gaudy and over-the-top but it’s crazy fun. One complaint could be that the Leprechaun speaks almost entirely in rhyme for every one of his lines. If this movie wasn’t already insane, it would be a negative. As it stands though, you simply accept it for what it is. Leprechaun 3 is the very definition of a campy horror-comedy. 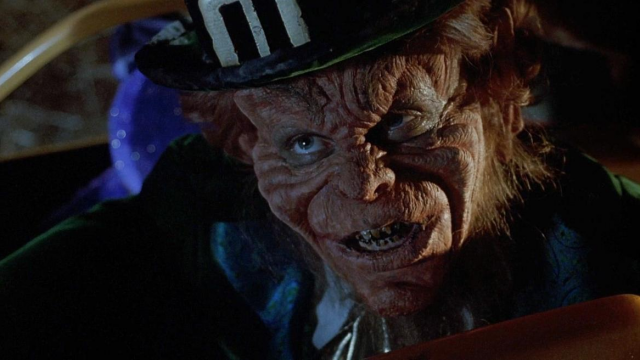 Of course, the original is the best once again. Although there are some funny moments to be had, the first film is the closest the series ever gets to true horror. The film opens with Dan O’Grady returning from Ireland after stealing the Leprechaun’s gold. He’s trailed back to his home in North Dakota by the Leprechaun but is able to restrain him by sealing him in a crate with a four leaf clover on top of it. Ten years later, J.D. Reding (John Sanderford) and his teenage daughter, Tory (Jennifer Aniston), move into the O’Grady house. The Leprechaun is accidentally freed by Ozzie (Mark Holton), one of the painters hired by J.D., who then terrorizes the Redings and the painters, Ozzie, Nathan (Ken Olandt), and Alex (Robert Hy Gorman), in an attempt to reclaim his missing gold.

Yes, this was Jennifer Aniston’s feature film debut. Even though the film received negative reviews, she’s really not that bad in it. She seems like her usual self even at a young age even for starring in a dopey movie. The other actors aren’t too bad either with Alex being a standout for some of his dialogue. Many of the magic-based kills from the other entries are replaced with more vicious ones in this first film. Leprechaun relies mostly on brutality and gore as opposed to comedy and magic for its death scenes. It feels slightly more realistic and in line with the film’s tone. While the premise is still pretty dumb, it still feels like a legitimate horror movie.

Over the years, many horror fans have clamored for a mashup of the series with Child’s Play. While a Leprechaun vs. Chucky scenario makes some sense, it would almost be too much. The resulting film would be nothing but wisecracks back and forth between two supernatural characters who can’t be defeated. It would also be hard to find motivation to get the two of them into the same film.

Overall, the Leprechaun series is, admittedly, a pretty big failure. Yet, there’s something endearing about watching some of the shenanigans being played out in the films. While traditional slasher films do dabble in the supernatural, the Leprechaun films can have some fun with the sub-genre. The main character can crack jokes and toy with his prey and it makes sense within the story. Regardless, the franchise has cobbled out its place in history. The Leprechaun may not be remembered as one of the greatest horror villains of all time but he certainly won’t be forgotten, especially on St. Patrick’s Day.