Wow. Alright. Well, we’re not going to waste any time getting into this review. Darren Aronofsky’s new film, mother! (yes, lowercase), is absolutely insane. Sometimes insanity can be a bad thing in movies but, in this case, it’s simply impossible to look away. While mother! certainly isn’t a film for everyone, it’s an experience that you must see to believe. It’s an uncomfortable watch that crescendos into a psychotic climax that will keep you thinking long after you leave the theater.

Writer/director Darren Aronofsky is definitely no stranger to the bizarre and surreal. With films like Requiem for a Dream, The Fountain, and Black Swan under his belt, viewers should be aware of what to expect from him. For this new film, Aronofsky had been working on a children’s movie when he came up with the idea for mother! and wrote the screenplay in five days. After assembling the cast and going through three months of rehearsals, the film began shooting in June 2016 and wrapped up that August.

On paper, the plot for the film is relatively simple. A couple, consisting of Mother (Jennifer Lawrence) and Him (Javier Bardem), a poet suffering from severe writer’s block, lives in a large, isolated farmhouse. One day, a Man (Ed Harris) comes to their house and Him allows the Man to stay overnight much to Mother’s dismay. The two hit it off and soon the Man’s wife (Michelle Pfeiffer) and, later, their two sons (Brian and Domhnall Gleeson) show up as well. As the film continues, Mother’s idyllic existence is turned on end by both the strangers and her husband’s disregard of her feelings.

Before we continue any further, it should be known that this review will be somewhat vague. There won’t be any major spoilers or extensive discussion about the events of the film. Again, mother! is the type of film that you just need to see. It would be a disservice to ruin anything for potential viewers. In saying that, there’s a lot to talk about in regards to interpretations of this film. It’s heavy on biblical references which become quite obvious while watching the movie. As you dig deeper, though, there’s more to it than that. Again, we’re going to leave this vague to avoid spoilers but this is a film that will keep you thinking long after seeing it. 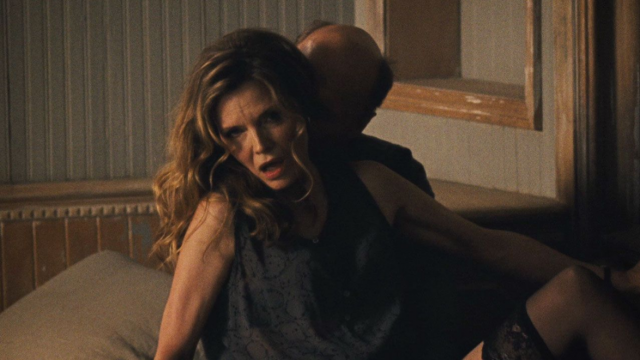 The performances in this movie are fantastic. Jennifer Lawrence plays a naive and vulnerable character who does everything possible to please Him. Javier Bardem neglects his wife as soon as the strangers begin to arrive as they’re somewhat awestruck by Him. Perhaps the person that shines the most, though, is Michelle Pfeiffer as the Woman. She’s rude, cold, and constantly pries into Mother’s personal life. She’s disrespectful of Mother’s requests within her own house to the point of ruthlessness. From top to bottom, the cast is perfect and they add to the uncomfortable vibe of the entire film.

Other highlights include the visuals and sound design. Unlike that other horror film that came out last week, mother! uses some phenomenal special effects. Both the practical and CGI effects blend together in a way that instills discomfort and also makes you dread what Mother is going through. Are these real occurrences or is she having a total mental breakdown? During many of the events, you never really know for sure how to interpret what’s happening. The soundtrack complements the visuals perfectly as well. Originally, a full score, composed by Jóhann Jóhannson, was used but both Aronofsky and Jóhannson agreed not to use it. Instead, Jóhannson used a minimalist approach and worked with sound designer, Craig Henighan to incorporate snippets of music into the sounds of the farmhouse. Needless to say, it’s a perfect match for this film. 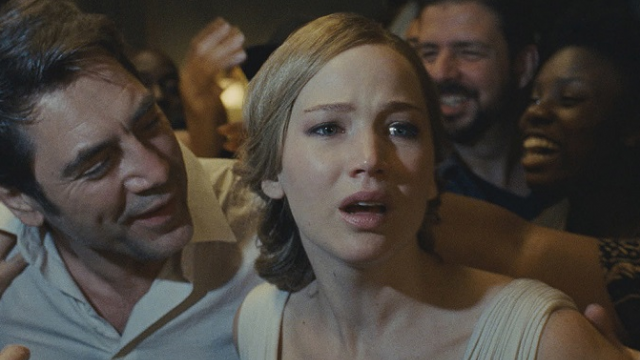 Now, it’s time to address the elephant in the room. Many of you may have heard that mother! is a ripoff of other films. Most notably, some have considered it a clone of Roman Polanski’s 1968 film, Rosemary’s Baby. On our end, it seems like a mixture between Rosemary’s Baby, Repulsion (another Polanski film), and The Others. While there are definitely some borrowed elements from all three of those films, make no mistake about it that mother! is its own entity. There’s enough substance and intrigue for the film to stand on its own merits. Not to mention, all of the other things we’ve praised thus far are more than enough reason to see the film.

As soon as the credits roll, you’ll find yourself struggling to fully assess the experience that is mother! We definitely were. However, after digesting it for a few days, it’s just a film that you can’t get out of your mind. Between the events onscreen, the performances, and its technical aspects, there’s too much good to rate it any lower. Like we said before, this definitely isn’t a film for everyone and any hatred that it receives is understandable. Though, if you’re a fan of Darren Aronofsky’s work or just a fan of dark, twisted, and insane types of cinema, then this is for you. Mother! is like a deranged trip through someone’s worst nightmare and it’s too compelling to look away.