Since its creation in 1995, the Pokémon franchise has become an absolute juggernaut. What started out as a fun little collecting/adventure video game has become a worldwide phenomenon. You may be surprised to know that Pokémon is actually the highest grossing media franchise of all time. Marvel Studios may be killing it in the film and television world with the Marvel Cinematic Universe but Pokémon has been all encompassing. Spanning across every conceivable medium from video games, toys, card games, and anime shows and films, the franchise has raked in over $90 billion total. Oddly enough, there have been numerous anime films based on the Japanese “pocket monsters” yet there has never been a live action adaptation. That finally changed with the recent release of the first full length, live action feature film, Pokémon Detective Pikachu.

This new film is an adaptation of a video game but not the flagship video game series that most people are familiar with. In those games, players take control of a character destined to become a Pokémon master. You catch and battle your Pokémon in an effort to defeat all of the game’s gym leaders and also discover every type of Pokémon possible. In contrast, Detective Pikachu is a spin-off game in which players partner with a talking Pikachu to solve mysteries. The full version of the game was released in March 2018 on the handheld Nintendo 3DS system. Though the game received mixed reviews, it was praised for its storytelling and was still the top selling 3DS game during its month of release.

The film adaptation of Pokémon Detective Pikachu follows a 21 year old insurance salesman named Tim Goodman (Justice Smith). Despite everyone’s love for Pokémon, Tim is uninterested in the creatures following the death of his mother and absence of his father. Soon, he discovers that his father is rumored to have died when his car was attacked while investigating a case. Tim travels to Ryme City, a metropolis in which humans and Pokémon live together harmoniously, to collect his father’s assets. Though, he discovers a talking Pikachu, voiced by Ryan Reynolds, sniffing around his father’s apartment. Pikachu is Tim’s father, Harry’s, partner who survived the crash and ended up with amnesia. Pikachu’s logic is that if he somehow survived, Harry may have survived as well. Tim and Pikachu, of course, team up to solve the mystery of what really happened to Harry. 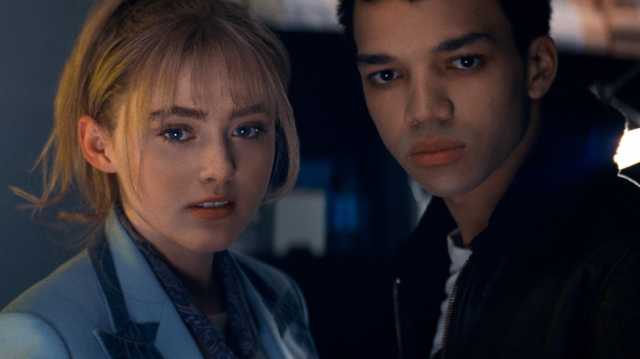 When it comes to the story of Pokémon Detective Pikachu, there’s not a whole lot to talk about. It’s just a standard mystery. There’s nothing too revelatory about it as viewers can mostly see where the story is headed well before it gets there. Tim and Pikachu interact with other characters like reporter Lucy Stevens (Kathryn Newton), Detective Hideo Yoshida (Ken Watanabe), and the disabled creator of Ryme City, Howard Clifford (Bill Nighy). In doing so, they learn new details about the attack on Harry that send them to seedier parts of Ryme City in typical film noir-esque fashion. It’s kind of reminiscent of something like Who Framed Roger Rabbit with its detective story and colorful characters set in a realistic world.

While the story isn’t necessarily anything to write home about, the human characters aren’t nearly as good as the ones in the aforementioned Roger Rabbit. No one does a poor job but most of the performances are just kind of stereotypical and wooden. To the actors’ credit, it feels like everyone is trying to do a good job throughout the film but they just really don’t have much to work with. Poor Ken Watanabe seems horribly misused in this film as his character adds basically nothing to the overall plot. That’s mostly the case with all of the human characters. They’re there because the story needs them to be. No more, no less. Justice Smith is a decent enough protagonist but he’s still not the star of the film.

Let’s face it, there’s only one reason that people are coming out to see Pokémon Detective Pikachu and that’s to see their favorite adorable creatures on the big screen. In this regard, the film does pretty well. In Ryme City, you see police officers with a number of Growlithes acting as police dogs, a pack of Squirtles putting out fires alongside firefighters, and the multi-armed Machamp directing traffic. The crew of the film did a really good job integrating Pokémon into real world situations and you’ll constantly find yourself scanning the screen for clever usage of the creatures. One of the best scenes of the film overall is the interrogation of Mr. Mime in which Tim and Pikachu must play into his game to extract information. Seeing realistic takes on the Pokémon is something that people have been waiting a long time to see and the film doesn’t disappoint. 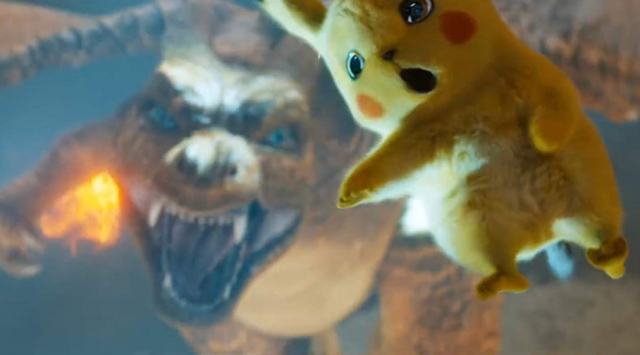 The best performance of the film, by far, is Ryan Reynolds as the titular Detective Pikachu. Despite being probably best known for his raunchy portrayal of Deadpool at this point, Reynolds’ delivery as the cute and innocent Pikachu really works perfectly for this film. Again, the character design is excellent and you can accept Pikachu’s presence in this world. There’s an air of adventure and excitement in the performance and Reynolds’ use of comedy not only defines the role but the tone that the film itself was going for. There were some other rumored actors like Dwayne “The Rock” Johnson and Danny DeVito for the role but Reynolds was certainly the right choice. Though, there’s probably some money to be made with a Danny DeVito Pikachu as well.

In all honesty, there’s not much else to say about Pokémon Detective Pikachu. It’s a very watchable and entertaining film. While it’s light on story and human characters, the film makes up for it with its portrayals of Pokémon and, in particular, Detective Pikachu. Everything looks really great but it also makes you wonder what could’ve been. Frankly, the Detective Pikachu direction was an odd one to go in. It’s true that there have been a number of movies made, as well as an entire show, about the franchise’s main protagonist, Ash Ketchum. Yet, isn’t that what fans would’ve wanted to see on the big screen? It’s great to see the Pokémon looking the way they do in this film but where are the battles, touching relationships, and desire to be the best Pokémon trainer? For the first live action film in the series, Pokémon Detective Pikachu provides a visually stunning and fun look at a world that fans have clamored for. Yet, it doesn’t quite deliver fully in being the actual Pokémon movie that fans may have wanted.