At this point in time, 1980’s nostalgia is at an all time high. Don’t believe it? Just look at some of the movies and television shows that have come out over the past few years. You have titles like Stranger Things, GLOW, and Stephen King’s It that are set during the time period. Then, there are all the remakes and reboots of 80’s properties like The A-Team and 21 Jump Street for movies and Lethal Weapon and MacGyver for TV shows. If you’re a video game collector, retro game prices have gone up significantly in recent years after being deemed mostly worthless in the past. For some reason, a time period that many had written off as terrible at one time is now the in thing. That’s no more evident than in Steven Spielberg’s 80’s love letter, Ready Player One.

The film is adapted from Ernest Cline’s 2011 novel of the same name. The novel was Cline’s debut and it received an Alex Award along with the Prometheus Award in 2012. Cline himself co-writes the screenplay for the film adaptation with Zak Penn as well. Penn has been quite hit or miss in his career with films like X2: X-Men United, X-Men: The Last Stand, and Elektra on his resume. Originally, the film was set to release on December 15th but was pushed back to late March to smartly avoid competition with Star Wars: The Last Jedi.

Ready Player One takes place in the year 2045. Wade Watts (Tye Sheridan) lives in a slum in Columbus, Ohio with his aunt, Alice (Susan Lynch), and abusive boyfriend, Rick (Ralph Ineson). To escape from the unsavory real world, Wade, and much of Earth’s population, visit the OASIS. The OASIS is a virtual reality world created by the late James Halliday (Mark Rylance). Before his death, Halliday created Anorak’s Quest. The goal is to solve three challenges and find the hidden Easter egg left within the game. Upon doing so, the victor inherits the entirety of the OASIS. Wade, as his avatar, Parzival, sets out to conquer the challenges with his digital friends, Aech (Lena Waithe), Art3mis (Olivia Cooke), Sho (Philip Zhao), and Daito (Win Morisaki) before the villainous Nolan Sorrento (Ben Mendelsohn) and his company, IOI, beat them to it.

With a cinematic master like Steven Spielberg at the helm, it should be obvious that there is a certain charm to Ready Player One. While Spielberg has most recently dabbled in historical drama like Lincoln, Bridge of Spies, and last year’s The Post, he himself is a huge part of the 1980’s. The Indiana Jones series and E.T.: The Extra Terrestrial alone are some of the biggest films from the time. He also served as a producer on films like Gremlins, The Goonies, and the Back to the Future trilogy. It’s safe to say that Ready Player One isn’t too far off from any of those films in terms of pure entertainment. With this film, Spielberg proves that he still has a taste for the fantastical. 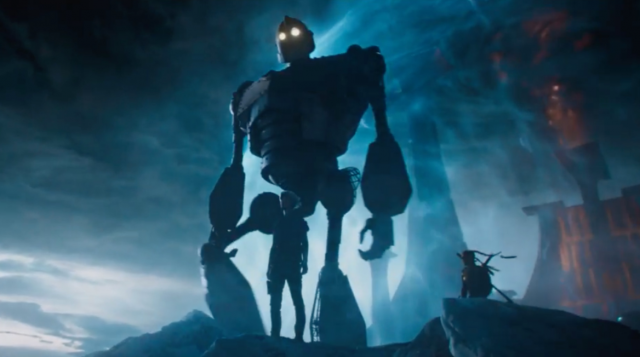 Years ago, I wrote a piece for another site about the film Forrest Gump. In there, it was stated that the film is a product of pop culture fluff. Well, after seeing Ready Player One, Forrest Gump has nothing on it in terms of being pop culture fluff. Essentially, the entire reason to watch this film is to see how many references they can cram into its bloated two hour and twenty minute runtime. From characters like the Iron Giant, King Kong, and a handful of slasher villains to notable vehicles like the Delorean from Back to the Future and the bike from Akira, the film never stops throwing out recognizable references. There’s even an entire sequence dedicated to a recreation of The Shining for one of the challenges in Anorak’s Quest. It’s actually really well done and is possibly the best part of the entire movie.

While it’s fun to scan the virtual reality scenery for recognizable characters and objects, the pop culture speak doesn’t end there. As if most of the film’s target audience couldn’t figure out the nods to other properties themselves, the characters always have to say a name or explain the relevance of certain things. There are so many instances where the dialogue simply kills the cleverness of a reference. The script treats the viewers as if they couldn’t possibly get the majority of things in the film so it needs to tell you exactly what they are. Let’s get one thing straight. Ready Player One is quite possibly the geekiest film ever made. People that aren’t interested in popular or gaming culture probably aren’t going to see it. Sure, some of today’s youth may not get it as well as people who grew up in the 80’s or 90’s, but they’re not really the target audience either (more on that in a bit). 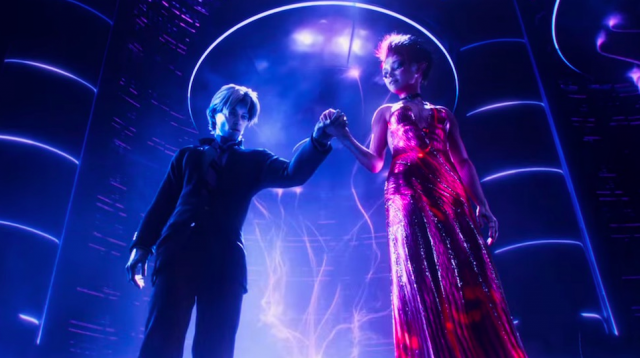 As for the negatives of the film, there are many. As we just mentioned, the film’s target audience should be people that grew up in the 80’s and 90’s. Though, there’s an obvious appeal for younger children due to the special effects and some of the dumber jokes. That being said, there’s quite a bit of bad language in the film and they even drop an f-bomb at one point which was kind of a shock. It’s kind of amusing but also wholly unnecessary. Parents bringing their children may not be too happy about that. The script, once again, is pretty awful most of the time and the character of Parzival is probably the lamest character in the entire film. Even the avatar is unappealing and generic as can be. Mark Rylance as James Halliday is pretty bland as well. He’s socially awkward but also kind of unlikable in general. He’s like a less endearing and unrelatable version of Garth Algar from Wayne’s World.

Ready Player One is a tough film to judge overall. It’s unbelievably stupid in a lot of ways but it’s also a lot of fun. It thinks it’s much smarter than it actually is but is jammed full of so much nostalgia that it’s simply fun to look at. In terms of its storytelling and characters, the film is a three out of five at best. When judging it by its entertainment value along with its visuals and sound, it’s a five. For the sake of this review, we’ll split the difference and call it a four out of five. If you go into it not expecting much, you may be surprised. However, if you go into it expecting another Spielberg masterpiece like Jurassic Park, you’ll probably be let down. Simply put, Ready Player One is nothing more than a love letter to years passed. It’s chocked full of recognizable things from the youth of its core audience and, for that, it’s at least worth a watch. It may even be worth two.