Back in 2002, English actress, Naomi Watts, burst onto the scene in Hollywood with her role in Gore Verbinski’s successful American remake of Japanese horror film, The Ring. From there, Watts has been criminally underrated while turning in great performances year in and year out. She has received Academy Award nominations for her roles in 21 Grams and The Impossible but has yet to win. Other than a few forays into big budget films, like Peter Jackson’s King Kong, she tends to stick to smaller, independent films. Yet, due to Watts’ consistency, it’s fair to wonder how she ended up in a film as awful as Farren Blackburn’s Shut In.

Blackburn is a British director who has primarily worked in television. He has directed episodes for a number of British TV shows as well as two episodes of Netflix’s Daredevil. Meanwhile, until Shut In, he only has one feature length film credit to his name with Hammer of the Gods. The trailers for his new film made it look more like a thriller but that’s not how Shut In turned out.

The film stars Watts as Mary Portman, a widowed child psychologist with a catatonic stepson, Stephen (Charlie Heaton) as a result of a car accident. As Mary cares for Stephen by herself, she also takes on trying to help a young, deaf boy named Tom (Jacob Tremblay). After Tom is about to be moved to Boston, he escapes custody during an ice storm and returns to Mary before disappearing once again. Following his disappearance, Mary is haunted by dreams and visions of Tom. Oliver Platt’s character, Dr. Wilson, is Mary’s lone confidante throughout the film. 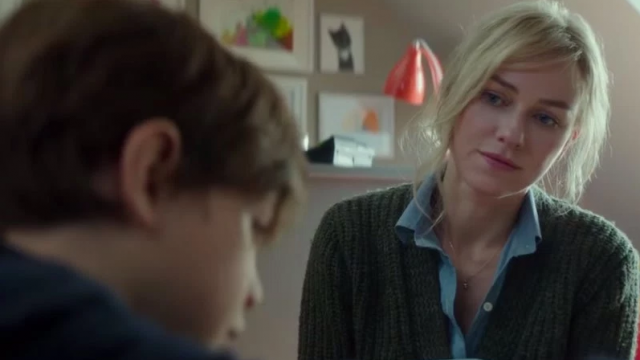 Along with Naomi Watts, the premise of the film is the best thing that it has going for it. Watts has mostly strayed from horror and thrillers since 2005’s The Ring Two but Shut In looked like a welcome return for her. However, we all know how movie trailers can be deceiving while often showing the best parts of the film. There’s no doubt about it, Shut In is a terrible film. It’s messy, disjointed, and flat out stupid at times.

First of all, despite having a solid main cast, the talent goes to waste here. Jacob Tremblay was excellent in last year’s critically acclaimed film, Room. While he melted hearts with that performance, he goes mostly unused in Shut In. He doesn’t speak and he doesn’t do much of anything noteworthy. Charlie Heaton is coming off the massive success of Netflix’s TV series, Stranger Things, and his role is slightly more interesting. He doesn’t move or speak due to being catatonic and there are strange occurrences surrounding him following Tom’s disappearance. Oliver Platt’s role is ridiculously phoned in (literally) as he mostly appears during phone or FaceTime calls from Mary. It seems as if the actor had a brief window of availability to which he met up with the director and quickly filmed his scenes.

Since this is spoiler free, it’s hard to delve into why Shut In is so terrible. It has everything to do with the ending. There’s a twist but it’s laughable. The logic behind it makes no sense whatsoever based on the circumstances and likelihood alone. Also, it becomes a dopey horror movie by the end with all of the typical cliches (i.e. tripping while running away, hiding in the house when the characters should be running out the front door, moronic villain, etc). All of the usual tropes are here and it severely hurts the film. Also, the characters frequently talk up an approaching ice storm. Though, during the finale, there’s only a few inches of snow on the ground. It certainly doesn’t appear that they were hit by a storm. If you can’t properly execute an important plot point, then don’t use it. That much should be obvious. 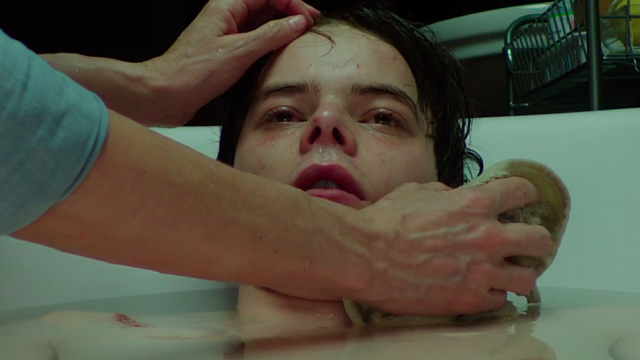 You spend much of the film watching Mary as she tries to make it through a full night of sleep. You never know whether the events onscreen are real or not which can work in a thriller like this. A lot of the “thrills” in this film are useless though. After a while, they don’t mean anything and it feels like they’re just taking up time until the finale. The storytelling simply isn’t up to par with the depth that the filmmakers are trying to achieve.

Shut In is just all around bad. It’s tolerable to watch up until its secrets are revealed but, at that point, it makes everything else irrelevant. There’s no real explanation for many of the plot points. The ending is mind-numbing and there isn’t much to like about this film in general. It’s a film that makes you wonder how it ever got past the planning stages. How does a script that’s this bad get made? How does an Academy Award nominated actress get involved? Who thought that the ending would be the least bit believable? There are so many questions that simply can’t be answered. Shut In has an interesting premise but is an utter disappointment as a moviegoing experience.