It’s no secret that television shows set in the horror genre have exploded in popularity in recent years. Of course, the most popular show has been The Walking Dead which premiered in 2010. There’s another series, though, that has been sneakily good and it debuted only a year after The Walking Dead. The anthology series, American Horror Story, has remained an intriguing tribute to all things horror since its inception in 2011. Each season has its own theme and a recurring cast playing different roles. So far, the seasons have been Murder House, Asylum, Coven, Freak Show, and Hotel. Last night, the finale aired for the show’s sixth season dubbed Roanoke.

For those unfamiliar with the theme, Roanoke is known as the Lost Colony. The colony was established at Roanoke Island in, what is now known as, North Carolina in the late 16th century. Within five years of being established, the colony was dismantled and all of its inhabitants disappeared without a trace. Although there are many theories as to what happened to the colony, no one knows what exactly happened at Roanoke to this day.

Instead of doing a retelling of the the story, American Horror Story’s sixth season is set in the modern day. The events of the show are told in an unconventional manner and split into two parts spanning five episodes each. The first part of the season is shot as a docudrama entitled “My Roanoke Nightmare.” The three main characters are a married couple, Matt and Shelby Miller, and Matt’s sister, Lee Harris. In the documentary portion, they are played by Andre Holland, Lily Rabe, and Adina Porter. There’s also a dramatic re-enactment portion of the show where the characters of Matt, Shelby, and Lee are played by actors.

Matt, Shelby, and Lee encounter supernatural events in their farmhouse haunted by the Lost Colony, led by The Butcher (Kathy Bates). On top of that, there have been numerous other violent acts committed on the property. There’s a pair of twins that opened the house as a nursing home where they murdered their patients, an Asian family that gets murdered, and Piggy Man (yes, a character with the body of a man and head of a pig) that all take turns tormenting the people in the house. 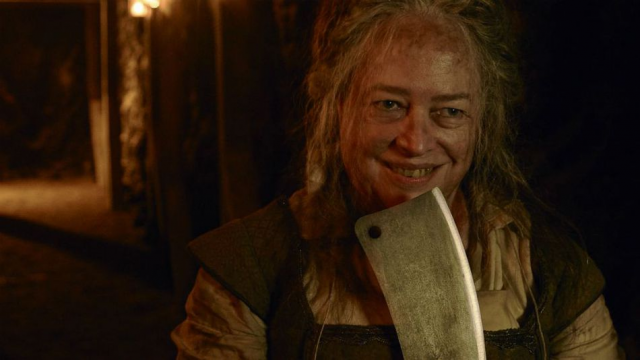 While the first five episodes of the season are a retelling of the events that haunted the three inhabitants of the Roanoke house, the second half of the season joins the actors from the docudrama with the real characters as they return to the house for the faux sequel, “Return to Roanoke: 3 Days in Hell.” Dominic Banks (Cuba Gooding Jr.), Audrey Tindall (Sarah Paulson), and Monet Tumusiime (Angela Bassett) play Matt, Shelby, and Lee in the re-enactment. In the second part of the season, they enter the house with the real victims while “My Roanoke Nightmare” producer, Sidney Aaron James (Cheyenne Jackson) aims to capitalize on the success of the first show.

While it may seem like there’s a lot of plot to follow, the show does a good job of balancing all of its characters. The first five episodes are realistic and sinister regardless of the documentary style. You sympathize for the real people as well as the dramatic characters in the re-enactment. The second half of the season, though, is a bizarre turn for the show to take but it’s ridiculously entertaining. Unfortunately, the horror aspects of the show are somewhat lost as comedy takes on a bigger role. There are some laugh-out-loud moments especially with Sarah Paulson’s character, Audrey. At one point, after the death of the real Shelby, Audrey screams, “Oh! Poor Shelby! I feel like a part of me died with her!” Audrey’s ridiculous reaction is fueled solely because she played Shelby in a docudrama and it’s hilarious.

One of the best aspects of American Horror Story in general has been the cast. It’s typically made up of a handful of series regulars and it’s no different in Roanoke. Many of the aforementioned actors and actresses, including Paulson, Bassett, Bates, and Rabe, have been frequently involved with the show. In addition to them, Wes Bentley, Denis O’Hare, and, series favorite, Evan Peters make appearances as well. Without a doubt, Sarah Paulson makes this season. She has been good in the previous and excellent in Hotel. However, she absolutely shines as both Shelby and Audrey in this new season. 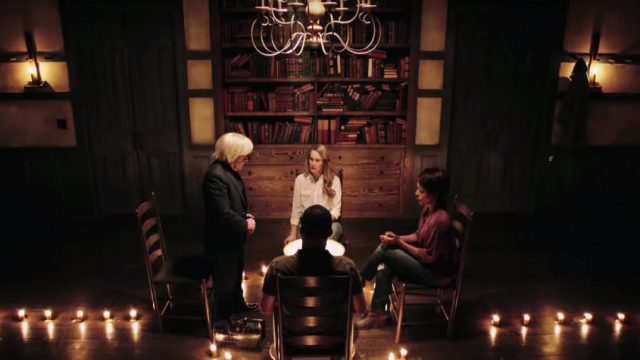 The best thing about American Horror Story: Roanoke is that it eliminates some of the issues from last season’s Hotel and has a more contained storyline. Yes, there is a shift in tone from one half of the season to the other but it still feels like the same story. Hotel suffered from too many characters with too many subplots happening at the same time. The focus of Roanoke in general is the house itself. The characters and their connections to the property have no bearing on the horrors of the house itself. They’re circumstantial. In a way, this season is similar to the first season, Murder House. The atrocities committed within the homes affect any and all who come after.

As always, this season is not perfect by any means. The tonal shift is understandable yet jarring given that the change was unlike any in the series. In previous seasons, the show tends to stick to the overall story but Roanoke was more like two stories in one. If you liked where the show was going in the first five episodes, you may be disappointed by the rest. However, there is a lot to enjoy in the latter half of the season. Yes, a lot of it’s absurd but it can also be a lot of fun. It’s a lot like Halloween: Resurrection where the characters are all filming everything going on inside Michael Myers’ house for a partially staged reality show. The later episodes in this season do the same thing. It’s easiest just to sit back and enjoy the ride.

Ultimately, American Horror Story: Roanoke continues the series’ penchant for a bloody and entertaining watch. Will the show frighten you? Doubtful. Yet, it does embrace the horror genre and you can easily pick out homages to films like The Blair Witch Project and even Cannibal Holocaust. The showrunners darkened the subject matter and made this season less flashy than the previous two while also keeping it just as fun. Since its debut in 2011, American Horror Story has been nothing but consistent. Judging by the recurring cast and additions of name actors, the cast and crew seemingly love working on the show. At times, it can get a bit silly but, overall, every season has been worth a watch and American Horror Story: Roanoke is no different.