When it comes to biographical dramas, it’s not unusual for them to be long and drawn out. After all, how’s it possible to condense an important historical event into less than two hours? There are often numerous characters, locations, and subplots that filmmakers attempt to address in a film’s runtime. Therefore, it’s refreshing that Clint Eastwood’s newest biographical drama, Sully, clocking in at only 96 minutes, is the exact opposite.

Over the years, Eastwood has proven himself to be a great director and that continues to ring true even at 86 years of age. Sully also isn’t his first film adaptation based on real events. Most recently, Eastwood directed American Sniper, which was nominated for the Academy Award for Best Picture, in 2014, J. Edgar in 2011, and Invictus in 2009. Of course, all of those films exceeded the two hour mark. Sully, on the other hand, is concise with a tight screenplay that never strays too far from the heart of its story.

The plot focuses on Chesley Sullenberger (Tom Hanks), an airline pilot who miraculously lands an airplane full of 155 crew and passengers on the Hudson River. The emergency landing took place after a dual engine failure following a collision with a flock of birds briefly after takeoff. Following “the miracle on the Hudson,” Sullenberger (AKA Sully) is questioned by the National Transportation Safety Board and is criticized for the potential dangers of his actions.

As per usual, Hanks is excellent in the title role. He’s a sympathetic character who, despite believing he did what he could to save the lives of the people on board, questions his own judgment throughout the film. The media spins him as a hero but the NTSB sees him as a risk. 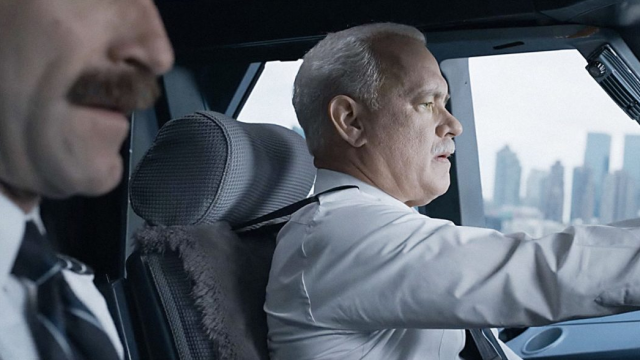 While Hanks is the driving force behind the film, Aaron Eckhart also does a great job as co-pilot Jeff Skiles. Skiles is the only real support since he was next to Sully in the plane. Although his role is relatively minor in terms of actual speaking parts, Eckhart is given some of the best dialogue which often results in a laugh or two. Sully’s only other confidant is his wife, Lorraine, played by Laura Linney. While she’s always on the side of her husband, Linney’s performance comes off as somewhat needy. That being said, her character is only a very minor annoyance and she’s never actually seen onscreen with Hanks as their characters communicate solely by telephone. Mike O’Malley, Jamey Sheridan, and Anna Gunn also have roles as NTSB members.

Perhaps the thing that’s most astounding about Sully is how few things actually happen. The entire film centers solely around the plane landing on the river. There are no real subplots or extraneous details added in. The event is shown and/or referred to a few times and, somehow, Eastwood manages to make each seem different. For instance, the first time the landing is shown, it’s mostly through the reactions of the passengers. While, at the end of the film, it’s shown again in full through the actions of Sullenberger and Skiles. It’s a unique idea that was executed to perfection. It may seem like the landing is only necessary once but each time it’s revisited, it feels just as important. 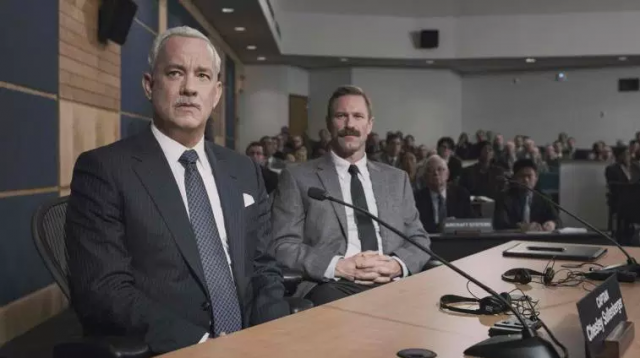 One main criticism of the film is that the real NTSB apparently didn’t take issue with Sully’s actions. They did listen to audio from the landing but it was not done on the grand scale portrayed in the film. As is usually the case with biographies, there tends to be some fabrication to make events appear more cinematic. This is certainly the case in this film and should only be looked at as a minor gripe if anything.

Simply put, Sully is an excellent film. It’s beautifully written, acted, and shot. Tom Hanks and Clint Eastwood both remain at the top of their respective games. The supporting cast is equally as impressive. The real life event was indeed a miracle and this film captures the gratification and appreciation that the real Chesley Sullenberger should receive for his actions. Ultimately, it wouldn’t be a surprise to see Sully creep back into the public eye during the 2017 Oscar season.