To understand the shortcomings of Teenage Mutant Ninja Turtles 2, Bay has to be mentioned first. All of the films that he has been associated with over the years, and especially the remakes/reboots by his, Brad Fuller’s, and Andrew Form’s production company, Platinum Dunes, have mostly been heartless disasters. Out of 14 films, their highest score on the film review website, Rotten Tomatoes, is a 55% with their lowest bottoming out at an utterly pathetic 7%. Clearly, this is not a company that aims for quality.

That being said, let’s get to TMNT 2. The plot is a convoluted mess. After saving New York City from the arch-villain, Shredder (Brian Tee), in the last film, the turtles have allowed Vernon Fenwick (Will Arnett in a totally useless role) to take credit for saving the city. This is due to the old “people fear what they don’t understand” mentality and the turtles decide to remain in the sewers (or “shadows” as the film’s title and dialogue refers to incessantly). Shredder escapes from a prisoner convoy with the help of Baxter Stockman (Tyler Perry) and two new henchmen: Bebop and Rocksteady (Gary Anthony Williams and WWE star, Sheamus, respectively). Also included in the film are fan favorites Casey Jones (Stephen Amell) and Krang (voiced by Brad Garrett). Jones helps April O’Neil (Megan Fox) and the turtles while Krang uses Shredder to open a portal to another dimension.

If all of this sounds somewhat familiar, it should since all of these characters and ideas are from the popular television show of the late 80’s/early 90’s. However, none of these things that fans of the show should be excited about are any good. 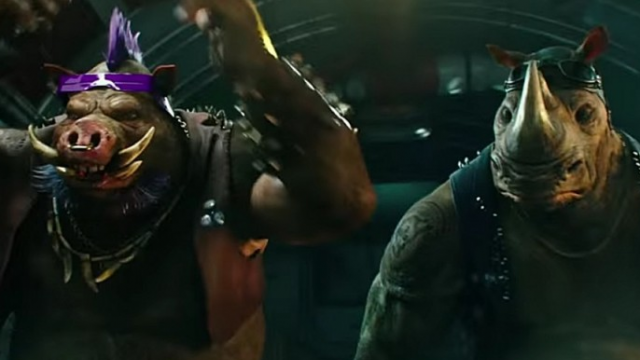 While it is great to finally see them in a feature film, Bebop and Rocksteady are absolute buffoons. Even though that’s kind of their thing, it just doesn’t work very well since they are the main villains for most of the film but are never really a formidable threat. Shredder is relegated to a bit role as you never get to see him fight anyone and he spends the entire runtime of the movie helping Krang. Speaking of Krang, he’s barely used and the final payoff with him is lackluster.

On top of the villains, you have the heroes who are equally as disappointing. Megan Fox as April O’Neil didn’t work in the last film and it doesn’t work here either while Stephen Amell is horrendous as Casey Jones. Every time he speaks, it just sounds like he’s reading his lines straight from the script. He actually is quite reminiscent of Chris O’Donnell as Robin in Joel Schumacher’s Batman Forever and Batman & Robin.

Finally, we have the turtles. Wow. Platinum Dunes has really screwed up their look, personalities, and even their jokes. They are still as ugly as can be and the pitiful screenplay constantly reminds the audience what each turtle’s traits are through dialogue and even on-screen text. At the beginning of the film, the turtles are introduced by freeze frames of each of them with their nicknames (Leo, Raph, Donnie, Mikey) and their role within the group (leader, muscle, brains, wild one). Simply put, if these characters were done properly, there would be no need to keep reminding the audience of their specific traits. The jokes in both films are some of the most juvenile and unfunny lines of dreck ever. It’s as if the screenwriters had to have someone explain how humor works before they sat down to write the script but they still didn’t quite understand the concept. 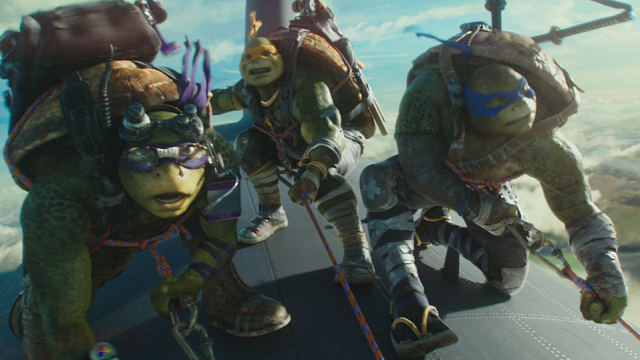 At this point, it’s safe to wonder, “Is this movie all bad?” Quite frankly, the answer is yes. There are some extremely brief moments where the characters that we know and love shine through but they are few and far between (i.e. the elevator scene from the first film). Other than that, there just isn’t much to this movie. It doesn’t seem like Platinum Dunes cares about these characters whatsoever and, if that is indeed the case, then why have they even bothered making these two movies?

In all fairness, Teenage Mutant Ninja Turtles: Out of the Shadows is better than its predecessor. However, the only reason that it’s better is because it includes characters like Bebop, Rocksteady, Krang, Baxter Stockman, and Casey Jones. Even though they’re there, none of them are done very well so the attempt is mostly in vain. This sequel really had a chance to instill faith back into the fanbase after the colossal misstep of the first movie. All TMNT 2 did was cram everything that fans wanted into one film without doing anything particularly well. Hopefully, this is the last we have to see of the Platinum Dunes Teenage Mutant Ninja Turtles series. If you need a fix of the turtles, watch the original 1990 film, its sequel, Secret of the Ooze, or the old animated series. Stay away from this moribund Michael Bay-produced garbage.