Well, it looks like 2019 has begun to rear its ugly head once again. While some recent releases have washed away some of the stink of the first half of the year, reality comes crashing back with some more low quality films in the final months of the year. It’s always depressing when a film with a ton of hype crashes and burns but, sadly, that is the case here. Filmmaker James Cameron returns after a 28 year hiatus to produce a brand new installment to his iconic Terminator franchise. Though, with Terminator: Dark Fate, Cameron’s return doesn’t quite elicit the results that fans were expecting in this sequel.

As the sixth film in the series, Terminator: Dark Fate took the route of a number of recent sequels by retconning the three films that followed Cameron’s masterful Terminator 2: Judgment Day. Like 2018’s curiously named Halloween, Dark Fate serves as a direct sequel to Judgment Day instead of the most recent film in the series, Terminator: Genisys. Frankly, this was probably the best route to go as films like Terminator 3: Rise of the Machines, Terminator: Salvation, and, especially, Genisys muddied the timeline beyond recognition. To simplify everything, it was better to just pretend those films never existed and start fresh. However, even though Dark Fate decided to play by its own rules, the sequel still wasn’t able to abide by them.

*Just a disclaimer: there will be a spoiler in the upcoming plot rundown about something that happens in the very first scene of the movie. It’s a major event within the Terminator universe but isn’t really crucial to this film overall.*

The film opens with Sarah Connor (Linda Hamilton) and her son, John (a CGI Edward Furlong), on a beach in Guatemala after the events of Terminator 2 where they destroyed Cyberdyne and prevented Judgment Day. Suddenly, a T-800 Terminator (Arnold Schwarzenegger) appears and kills the young John Connor. Fast forward to the present day and a new Rev-9 model Terminator (Gabriel Luna) arrives in Mexico City to kill a woman named Dani Ramos (Natalia Reyes). Meanwhile, an augmented super soldier, Grace (Mackenzie Davis), is sent back through time to protect Dani. The Rev-9 mimics Dani’s father to find her but Grace appears in time to thwart him. After a lengthy chase, Sarah Connor arrives to save Dani from certain death and buy the trio time to escape from the Rev-9. While Sarah and John’s actions from T2 did avert the rise of Skynet in the future, a villainous AI called Legion ensures a nuclear holocaust and Judgment Day proves inevitable. For the rest of the film, Sarah, Grace, and Dani try devising a plan to stop the Rev-9 with eventual help from a familiar face.

As fans will see, the plot for Terminator: Dark Fate is essentially the same plot as any other Terminator sequel beyond Judgment Day. Even though Sarah and John destroyed Cyberdyne and prevented the creation of Skynet, Judgment Day still happens. As always, a Terminator and a guardian of some sort are sent through time to protect someone. While this is what Terminator tends to be about and it’s understandable that Dark Fate would stick with the formula, it’s hard to see the point in doing so. Director Tim Miller, producer James Cameron, and company decided to ignore the previous three sequels so why make a film that follows the same formula again? It shows a complete lack of creativity and immediately drags this new film down. In a nutshell, this is everything we’ve seen before from this franchise. 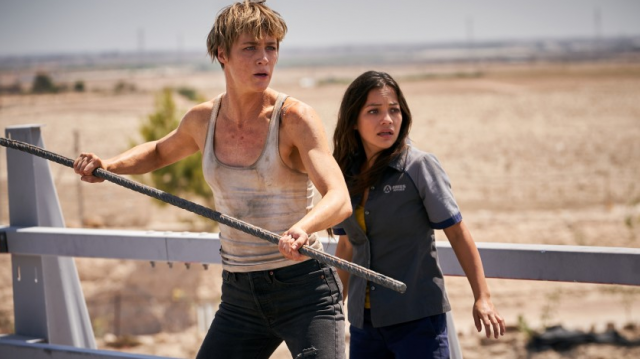 Now, some people will say, “But they brought back Linda Hamilton!” Yes, they did and it’s awesome to see her back in the role of Sarah Connor. She’s a convincing battle tested character who’s relentless in her efforts to destroy every Terminator she comes across. However, when she meets up with Grace and Dani, she becomes the all-too-familiar torch passing character we’ve seen in countless other resurrected franchises. Honestly, you can substitute every new character into the spot of one of the old ones with barely any effort. Grace is Kyle Reese, the Rev 9 is the T-800 from the original film, Dani is a mixture of Sarah Connor and her son, etc. The problem with this is that we’ve seen all of this before. There’s nothing new, original, fresh, interesting, or any other adjective you can think of to describe this film. This is just another Terminator film because, apparently, it was time for another Terminator film.

Along with carbon copied characters, each of their story arcs don’t feel very inspired either. Before going any farther, know that the cast does the best with what it has. Mackenzie Davis and Natalia Reyes do a fine acting job. It’s just that their characters don’t feel unique and the script doesn’t give viewers a chance to really care about them in general. Reyes especially is given the short end of the stick as her character arc just isn’t convincing whatsoever. Again, Grace is just a female Kyle Reese with cybernetic augmentations. Her backstory could’ve been more interesting and used to differentiate her from previous characters. Instead, the backstory you get is quite reminiscent to Marcus Wright’s from Terminator: Salvation. If the filmmakers are going to ignore previous sequels, then why steal things from said sequels? The aforementioned 2018 Halloween did some of these exact same things to similar results. 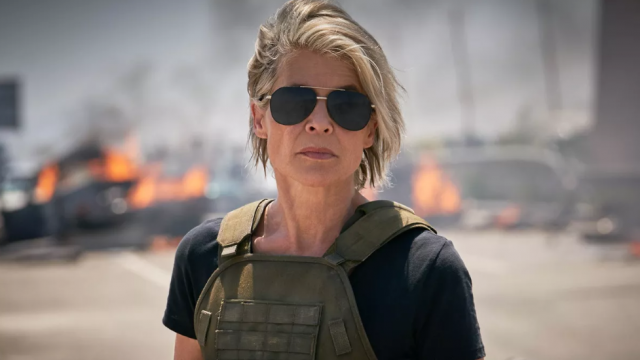 The film isn’t all bad (just mostly) as it does offer up some things that Terminator fans will appreciate. The first act of the movie up through the introduction of Sarah is actually quite good. It puts you in the mindset of Judgment Day which, as arguably the greatest action movie and sequel ever made, is certainly welcome. It’s no spoiler that Arnold Schwarzenegger makes an appearance in this film since the trailers made sure to show him. As always, a Schwarzenegger sighting is appreciated in the Terminator franchise. Frankly, this version of the T-800 probably has the most interesting story out of all the characters outside of Sarah. However, it’s a very inconsistent and flawed idea based on what fans have come to know about the Terminators and their ability to understand humanity. There’s something off about the whole thing and, like all of the other sequels, leads to plot holes and discrepancies about who the Terminators are.

It’s truly shocking that no one has been able to make a serviceable Terminator sequel since 1991’s Judgment Day. Out of the four films since that one, Terminator: Dark Fate is probably the best. As you can tell from the rating, though, that’s not saying a whole lot. A film like Genisys at least tried to do something different even if it was a nonsensical time traveling mess. By retconning sequels and bringing back Cameron, Dark Fate deserved to be way better than it actually is. Why can’t a franchise that involves time traveling, changing the future, disrupting the past, and everything in between do anything original? Tim Miller and James Cameron could’ve literally done anything with this film. Even the action scenes don’t necessarily trump anything that’s been done in previous sequels. They definitely don’t top the groundbreaking action of Judgment Day. While the film built up a lot of good faith in bringing talent back from the first two installments, Terminator: Dark Fate is just another recent Terminator movie. It’s watchable but nothing about this film is going to resonate with anyone beyond the movie theater’s exit sign.