Since the first Paranormal Activity film became a massive surprise hit back in 2007, horror films featuring demonic possessions have been pumped out at an alarming rate. There are plenty films in this horror sub-genre that are simply atrocious (i.e. Devil’s Due) but there are a small handful that aren’t all that bad. There are even a very select few that are the cream of the crop such as James Wan’s The Conjuring.

Upon its release in 2013, The Conjuring was generally well received by critics and horror fans alike as it went on to gross $318 million worldwide off of a $20 million shooting budget (IMDb). With these kinds of numbers, it was inevitable that a sequel would soon be in the works. Oddly enough, a spinoff film, Annabelle, was released in 2014 before The Conjuring 2 but was nowhere near the quality of the original film.

The Conjuring 2 sets Ed and Lorraine Warren, played by Patrick Wilson and Vera Farmiga respectively, against a new foe that has history with the Warrens. This time around, they travel to Enfield, England to assist Peggy Hodgson (Frances O’Connor) and her four children who have been experiencing supernatural occurrences in their home. The family member most affected is Peggy’s daughter, Janet (Madison Wolfe). Along with the issues that the Hodgsons are facing, Lorraine has been having premonitions that have escalated and the Warrens question whether they should continue their work as demonologists.

Firstly, it’s nice to see that so many of the people that were cast and crew members on the first film return for the sequel. Director James Wan and screenwriters Carey and Chad Hayes are back as well as Wilson and Farmiga as the leads. Even some cast members who had smaller roles like Steve Coulter, Sterling Jerins, and Shannon Kook return for some brief cameos in this film. The Conjuring 2 most certainly benefited from having such a large part of the creative process return. It definitely feels like another piece of the Warren’s story as opposed to a disjointed cash-in. 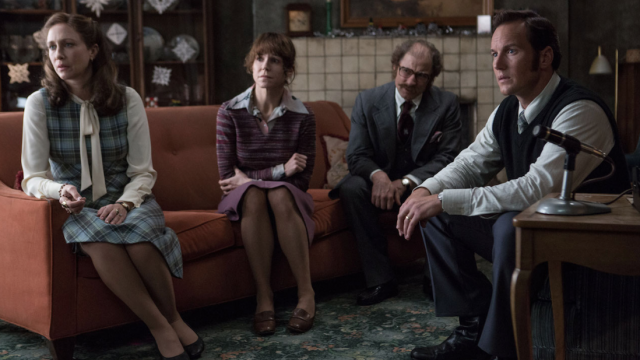 That being said, though, there are many things that were lifted straight from the first film and recycled in this one. There’s a scene in particular where Janet is pointing at the dark kitchen while her siblings look on and asks if they can “see it” before a ruckus ensues. The same thing happens in the first movie where Christine asks her sister, Nancy, the same question before the spirit in question terrorizes the girls.

Also, with this film, the stakes just don’t seem to be quite as high as they were with the Perron family. With the evil spirit in The Conjuring 2, viewers are supposed to feel as if it’s more wicked and evil than Bathsheba from the first film while also providing a real threat to the Warren’s but that’s just not the case. Without spoiling anything, you’re able to punch holes in the spirit’s logic for targeting the Hodgsons and you never really receive an understandable explanation for its presence. On top of that, the scares aren’t as eerie and they seem to be more stylized than the realistic, no-nonsense thrills of the original. You can definitely tell that the filmmakers had a higher budget with The Conjuring 2 by the look of the special effects alone. 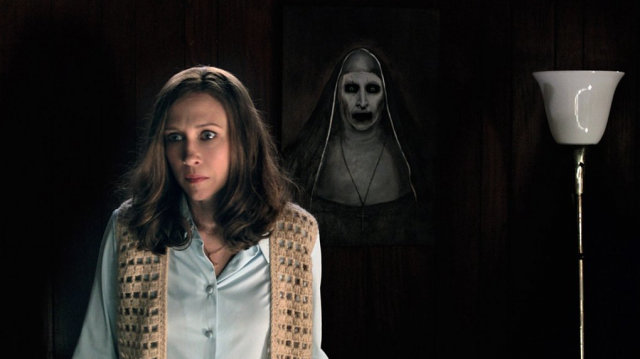 This isn’t to say that this film has nothing to offer. While it’s not as good as the first, there is still plenty to like about it and it’s far better than a lot of the other films being released in the demonic possession sub-genre. When the scares are simple and believable, they’re just as effective as any of the ones from the first film. Ed and Lorraine are still kind hearted and likable as are all of the Hodgson family members. The other characters such as Maurice Grosse (Simon McBurney) and Anita Gregory (Franka Potente) don’t get a whole lot of time to shine but they do add a little flair to the cast in their brief appearances.

While The Conjuring 2 has a lot of hype to live up to from its predecessor, it must be stated that the gold standard of demonic possession films is still 1973’s The Exorcist. All of these films steal ideas straight from The Exorcist and yet none of them have ever been able to do it better. Though, The Conjuring and its sequel do come close. They’re not overly original but they’re both so entertaining and well made that it’s fair to overlook their shortcomings. The Conjuring 2 may not be a revolutionary horror movie by any means but it’s most certainly worth watching especially if you’re a fan of the first.