Right now, we’re gearing up for a pretty bland month at the movies. While there could be a sleeper hit mixed in somewhere, the upcoming slate of releases looks inferior to the fall and winter releases on the horizon. Regardless, we’re still in August so it’s time to talk about one of the last highly anticipated titles of the summer: The Dark Tower.

This is a film that had been in developmental hell for a decade prior to its release this weekend. With names like J.J. Abrams and Ron Howard, who’s credited as a producer on this film, linked to the director’s chair over the years, the property definitely had a demand. After all, the film is based on the Stephen King series in which there have been a total of eight books released. The novels have a cult following and readers have been dying to see feature film adaptations. Though, there’s no doubt that both readers and moviegoers alike will be unsatisfied with the turnout.

The Dark Tower follows a boy named Jake Chambers (Tom Taylor) who’s having dreams about the Man in Black (Matthew McConaughey) abducting children and using their minds to destroy a specific tower and, in turn, all of existence. The only person who can stop the Man in Black is the last Gunslinger, Roland Deschain (Idris Elba). Jake’s mother, Laurie (Katheryn Winnick), plans to send her son to a clinic to help him deal with his delusions, but he escapes and discovers a portal to Mid-World. Here, he comes across Roland and the two form a bond in their desire to stop the Man in Black.

Unfortunately for The Dark Tower, the plot is its biggest issue. It’s not necessarily hard to follow as Roland and Jake are basically just trying to save the world but you can easily tell that there’s a lot of backstory and intricate details that the film ignores completely. Having never read the novels, we can’t go into too much detail on how faithful the film is. According to many, though, the film scraps much of the plot from the books and does its own thing. Gone are the great characters and mythology as they’re replaced with a typically mundane story. What’s most disappointing about the story is that, as a viewer, you actually do want to know more about the characters’ motivations and backstories. The film teases a deeper story but simply fails to deliver. 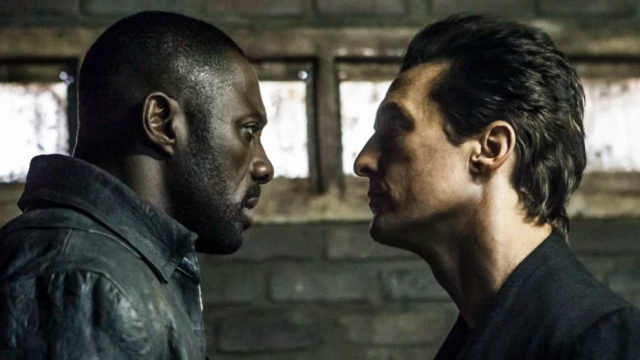 The script for the film is also pretty awful. No, it isn’t as bad as Valerian with its cliches and awkward character interactions. It’s just that the characters always seem to recite what they’re doing or explain important details to others. Basically, it’s the dreaded “telling instead of showing” dilemma. When the script has to tell the audience what’s happening for them to understand how the characters are feeling, it’s shoddy storytelling. Simply put, this is completely amateur and has no business being thrown into a big summer title. This is especially true when you consider some of the talent performing in the film.

Ultimately, the plot and the script kill any momentum that this film can muster up. Other than that, it’s not that bad. It’s definitely watchable. Idris Elba does a solid job as Roland. It’s too bad that he’s used more as a sidekick to Jake rather than being the main character. Still, he does the best he can with what he has to work with. Matthew McConaughey is serviceable as the villain. Again, he doesn’t have a ton to work with and you don’t really understand why he wants to destroy the world. Yet, he does have his moments as an unstoppable sorcerer. Another positive about the film is that it does look nice. Mid-World is desolate yet still impressive to look at. 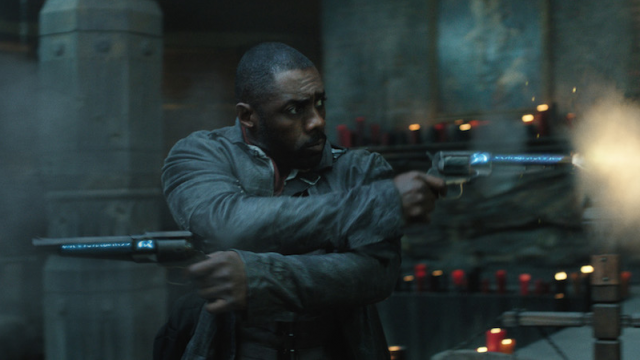 We should probably address the action scenes in the film as well. There isn’t a whole lot of action in the first half but director Nikolaj Arcel and his crew make up for it towards the end. While we saw most of it in the trailers, the gunfights with the Gunslinger, Roland Deschain, are solid. Roland quick loads his revolvers, pulls off trick shots, and numerous other nifty moves. That being said, it doesn’t feel all that fresh either. It’s cool to see him fighting off, presumably, demons and whatnot but there are countless other films that have already done this type of thing. The Matrix revolutionized slow motion gun battles and this film borrows a lot from that.

Overall, there’s no way that The Dark Tower is going to be remembered for anything other than being blah. With a planned television series starring Elba and Taylor and a hopeful sequel in the works, expectations were high for this film. Judging by the poor results, it wouldn’t be a surprise to see plans fall through. In all honesty, maybe The Dark Tower would play out better as a TV show. With the storyline, characters, and mythology built up through eight novels, there should be plenty of material to work with. The surprisingly brief 95 minute feature film version definitely wasn’t enough to cover everything. In conclusion, The Dark Tower was a poor attempt at establishing a new franchise. It’s probably best that we all just sweep it under the rug and forget it about now.

One Thought to “In Theaters Review: The Dark Tower”