It’s not often that a film allows you to throw out all of your inhibitions and simply have a good time at the movies. Shane Black’s The Nice Guys does just that.

The Nice Guys is a film that can be a bit confusing at times but, after a while, you start to get absorbed in the fine character work put in by Russell Crowe and Ryan Gosling and accept everything at face value. There are twists and turns all throughout the story but there is also a lot of comedy and/or action as well. It just seems like there is always something happening and the film’s approximate two hour runtime will fly by.

Both Crowe and Gosling are phenomenal in this film and their chemistry is through the roof. Although they begin the film on opposing sides, even their first confrontation with one another is a great moment that quickly establishes their relationship with one another. They constantly bounce off one another in awkwardly hilarious scenes but are also able to buckle down and do their detective work together without missing a beat. There’s no doubt that these two must’ve had a blast working together. 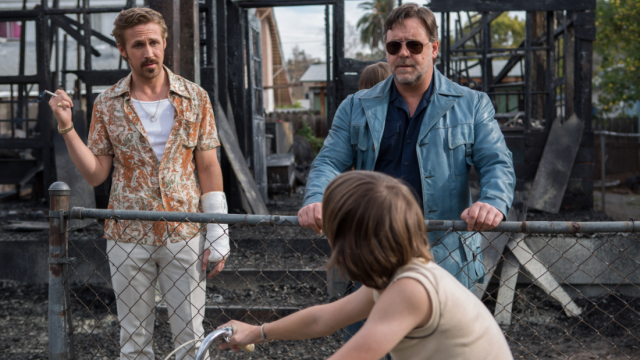 The supporting cast is great as well. Relative newcomer Angourie Rice plays March’s daughter, Holly, and handles going toe to toe with the star power of Crowe and Gosling with ease. Surprisingly, she is a big part of the film and is the heart and soul behind the two main characters. She is essentially Robin to Gosling’s metaphorical Batman. Beau Knapp and Keith David do a good job with their roles as buffoonish henchmen sent to intimidate Healy while Margaret Qualley’s conspiracy theorist Amelia is resilient yet as loony as can be. Perhaps the only cast member who underperformed was Kim Basinger. She wasn’t given much to work with in her short amount of screen time so it’s not entirely her fault either.

The Nice Guys is a somewhat tough film to categorize. It’s most certainly a comedy since there are a number of laugh-out-loud moments but there are also times when the comedy is replaced with aspects of a crime/thriller and others still where it is a flat out action movie. While this sounds like a little bit of a mess, everything is done well and you’re never really distracted by how much it jumps around. Unlike a film like Money Monster where sometimes it doesn’t know what it’s trying to do, The Nice Guys knows what it is and embraces the bi-polar nature of itself. In a lot of ways, it plays out similar to The Coen Brothers’ The Big Lebowski in that both films send their main characters on a wild goose chase over a red herring plot device. 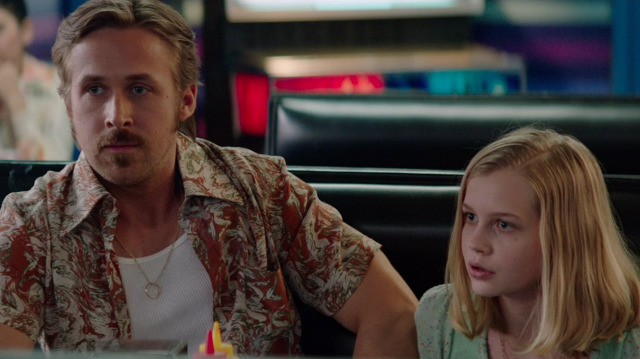 The one main criticism of The Nice Guys is that the editing is pretty poor. As much as you get sucked up into the ludicrous plot, the editing will jostle and sometimes lose you. There are spots where you’re not entirely sure which character is where or how something happened and it’s just plain unacceptable. The ability to maintain simple continuity and coherence within a film are day one editing traits that any Hollywood film editor should have a firm grasp on. Joel Negron was the editor on this film and most recently he has handled the duties on Michael Bay produced films like Teenage Mutant Ninja Turtles and Pain & Gain. Perhaps The Nice Guys would’ve fared better without a recent big budget action film editor.

Despite the editing, The Nice Guys is just too much fun to get down on. It’s not typical slapstick or referential humor that makes it funny. The jokes in this film are subtle and it’s the nuanced characters that draw the reactions. If you go into the film thinking it’s going to be non-stop stereotypical comedy, you’ll be disappointed. The Nice Guys is a film that has a lot of heart and it’s driven almost solely by its characters. The best way to experience it is to kick back, free your mind, and just let it do its thing.