In the past, we’ve discussed things like sexual abuse and the #MeToo movement numerous times on this site. From short films like Joseph McGovern’s Hush and David Legel and Andy Aguila’s Roses for Ms. Jacobs to features like A Young Man with High Potential and, more recently, The Assistant, there are many different examples of unwanted heinous acts spotlighted in cinema. The thing that connects the aforementioned films, along with a lot of their contemporaries, is the realistic and serious approach taken by filmmakers to tell these stories. Sexual abuse is no joke but it continues to be something that so many victims don’t speak out about. Even at the time of this writing, the #SpeakingOut movement has broken out in the world of professional wrestling with countless women coming forward with their stories about abuse they’ve suffered at the hands of male wrestling personalities. In this time where people of all races, religions, gender, etc. are seeking change and accountability in the world, a film like Michael Bentham’s debut feature, Disclosure, feels like a necessary tale about remaining steadfast against oppression.

The film centers on two married couples who have differing viewpoints on a particular incident involving their children. Danny (Mark Leonard Winter) and Emily Bowman (Matilda Ridgway) are shocked and saddened by certain abuse suffered by their four year old daughter at the hands of a young boy. The parents of the boy, Joel (Tom Wren) and Bek Chalmers (Geraldine Hakewill), insist that it’s simply impossible that their son could’ve done the things that the Bowmans are accusing him of. A lack of understanding and compassion turns into anger, denial, pettiness, and retaliation from the former friends in the wake of these serious allegations.

What Disclosure does really well is take one specific incident and blow it up into something much bigger. This isn’t to say that the type of abuse inflicted upon the Bowmans’ young daughter, Natasha, isn’t serious but the disagreement between couples becomes more about pride, reputation, and business the longer the film goes on. In modern times, there’s a big issue with accountability in that no one wants to be responsible for any wrongdoing. Both the Bowmans and Chalmers continue to say that they’re thinking about the children when maybe they never really are. Bek’s main point of contention is that Natasha is only four and may not be telling the truth while Emily argues that her young age is exactly the reason that it’s the truth. Then, things get more personal as each couple’s sex life is bandied about. Instead of a constructive and cathartic solution for all parties involved, blame and outright defiance become the tools used by each couple to smear each other. 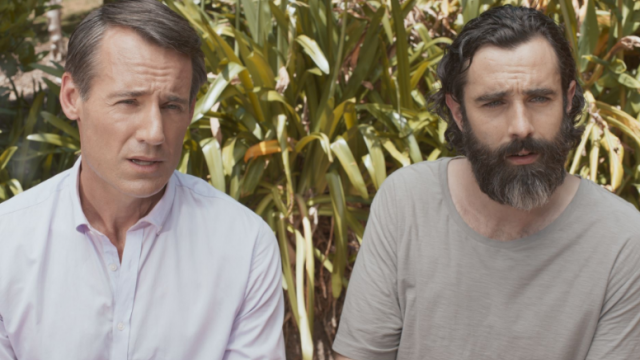 Writer/director Michael Bentham puts together an excellent script for Disclosure to fascinate, distress, and disgust viewers all at once. From the film’s opening moments to its final shot, viewers will be enthralled by the realistic approach Bentham takes. The pacing ebbs and flows as seemingly every step forward for the characters is followed by two steps back in coming to a resolution. At one point, Danny and Joel come to an understanding that will help their children while also saving their friendship and business relationship. However, it’s immediately shot down by the single-minded Bek. In his director’s statement, Bentham explains that this story is largely based on an experience a close friend of his had a few years ago. This led Bentham to explore the question of whether or not to believe the stories that children tell. He does so expertly through ignorant and insensitive responses from those who should be protecting children instead of exploiting them. It’s often sad to see how out of hand things get in the film but it’s also a story you can certainly believe.

Much of this is a credit to the film’s superb cast. With only four main cast members, each person has a lot to handle. Mark Leonard Winter’s Danny is probably the most even-keeled of all the parents as he’s just looking to smooth everything over. He understands the severity of his daughter’s claims but also wants to maintain the established relationship between the couples. Though, that may not be an option for the rest of them. Tom Wren’s Joel is mostly on the same page with Danny but his motives are a little more political. As a high ranking member of society, he stands to attract a lot of heat if his children are accused of something this unsavory and if his own skeletons in the closet are outed to the public. He acts as a friend to Danny but you’re skeptical if he really cares about their friendship or just about his own public image. As Emily, Matilda Ridgway is the most fiery of the bunch as she’s completely unwilling to accept that something didn’t happen to her daughter. She does show some tenderness as she’s more upset that the Chalmers don’t take the claims seriously as opposed to wanting to crucify the family for what happened to Natasha. She’s willing to work with them but she also refuses to dismiss the claims outright as well.

The one cast member who steals the show is Geraldine Hakewill. As Bek, Hakewill is tasked with remaining steadfast while suffering internally as her past seems to come back and haunt her throughout these allegations. While the audience never gets the complete story, Bek herself is a victim of childhood sexual abuse. Because of that, Ridgway’s Emily expects her to be the most sympathetic to Natasha’s claims. Instead though, Bek straight up rejects the notion that her son has done anything wrong. She protects him to sort of bury her own traumatic past instead of thinking about the young girl who may be a victim just as she had been. Bek is emotionally complex and Hakewill puts in a top notch performance that brings the character to life onscreen. While everyone in the film is really great, Hakewill brings Disclosure to another level. 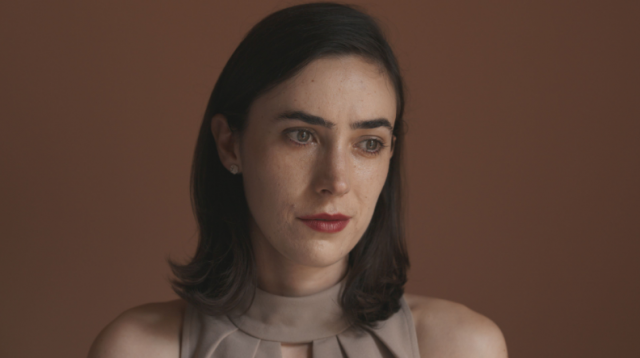 While Bentham’s script is concise and moves along briskly, you could say that sometimes it does go in circles. As a story about a disagreement between two couples, there may be one too many moments of premature understandings that are immediately shattered within seconds of the couples reopening their dialogue. It’s not a huge detractor since, as previously mentioned, Disclosure does flow well over the course of its runtime. Though, you may find that you’ve already taken a side in the argument long before the credits roll. The film shouldn’t bore anyone but sometimes it feels like it could use just one more variable to further explore the uncertainties of the plot.

Nonetheless, Michael Bentham’s Disclosure is a triumph of a feature film debut for the writer/director. It’s often reminiscent of Roman Polanski’s 2011 film, Carnage, in which two married couples get together to discuss a fight involving their children. Though a fine film itself, Disclosure feels a step above that as a relevant topic in a time of gross inculpability, hostility, and egotism. Parts of the film will have you questioning human nature and the complete disregard for others while other parts will still manage to gain your sympathy for certain characters. With Disclosure, Bentham crafts a troublesome and sobering tale of parenting gone wrong. Hopefully in its attempts to bring awareness to these issues, people can somehow find a way to help and care for each another once again.

*Disclosure is currently available for rent or purchase on video-on-demand platforms like Vudu. Check out the trailer below.*