It’s crazy to think of what the long, continuous camera take has become in filmmaking. What was once a unique way to show off filmmaking prowess and establish the plot or world of a film is now something of a selling point in cinema. On the heels of the success of Sam Mendes’s 2019 war epic, 1917, which appears to be shot in only two takes, writer/director Gavin Michael Booth actually does it for real. Booth’s new film, Last Call, legitimately shot in two takes, is an impressive exercise in filmmaking as well as an emotional rollercoaster chronicling a young woman’s attempts to save the life of a man she’s never met.

The film follows two separate people for a real time total of 77 minutes as both dwell on their own problems in life before a chance intersection via a telephone call. Beth (Sarah Booth) is a single mother who can’t get a hold of her child before her late night custodial shift at a college career center. Meanwhile, Scott (Daved Wilkins) spends his evening getting drunk by himself with only his depression and regret to accompany him. While attempting to call a suicide hotline, Scott accidentally dials the call center that Beth is working at. The two become engaged in a hard hitting conversation that demonstrates the impact that listening, understanding, and empathy can have even between two complete strangers.

Before we delve into the good things about the film (of which there are many), we’re going to briefly talk about its shortcomings. There’s something kind of generic about Last Call and its story. There are countless films featuring flawed characters who touch on the same types of issues that Scott and Beth have. You can kind of see where the film’s heading well before it gets to its destination. This may be a limitation of shooting each character’s story in one continuous shot. Presented in a uniquely altering split screen format, there’s sometimes a lot of downtime as characters move around their respective locations seemingly waiting for something to happen. Some of the small talk is also a bit dull and makes the film feel long in the tooth during these moments despite a brief overall runtime. 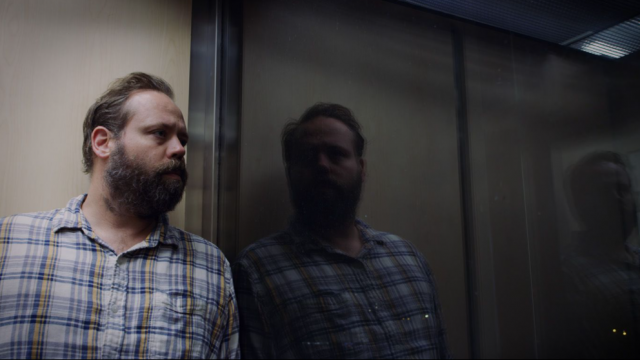 The good news, though, is that Last Call does eventually pick up and bring viewers on an emotional ride for the rest of its duration. What really brings the plot of the film alive is its two wonderful lead actors. Daved Wilkins as Scott does a great job as a flawed alcoholic who’s utterly alone in this hellish world he’s created for himself. Sometimes it’s tough for talent to act drunk without it coming off as insincere but Wilkins is mostly convincing throughout and you do feel for his character. However, it’s Sarah Booth who’s the absolute linchpin of the film as Beth. Over the course of the runtime, viewers need to relate to her while also going on this heartbreakingly emotional journey that she goes on while trying to save Scott. It’s not an easy feat as Beth has her own issues going on at home but, yet, viewers have to live vicariously through her and feel the desperation and sadness she feels for someone else. Beth is almost less of a character and more of a beautifully complex storytelling device to lead the audience on this journey. Her breakdowns are absolutely crushing at times and you feel as bad for Beth having to deal with this situation as you do for Scott having to live it.

Last Call is a very technically sound cinematic experience as well. There’s some excellent camerawork by both writer/director Gavin Michael Booth and Seth Wessel-Estes with some visually stunning angles, tracking shots, and framing. With both Scott and Beth isolated in pretty basic, everyday locations, it wouldn’t have been surprising for the film to be bland in appearance. That’s certainly not the case as Booth and Wessel-Estes explore every nook and cranny of their locations with some rich and vibrant cinematography to go along with it. Locations are populated with all kinds of interesting things to look at even when there’s not much going on with the actors onscreen. In addition, the colors pop and the beautiful city-at-night aesthetic looms through every window.

Now, we come to the biggest question and potential sticking point for people watching Last Call. Is the decision to shoot the film in two takes just a gimmick or is it a brilliantly implemented storytelling mechanic. Films like Touch of Evil, Boogie Nights, Elephant, Hunger, Birdman, and the aforementioned 1917 have used long takes in the past but it’s a truly bold decision to shoot an entire film this way. This is especially the case when, in actuality, both Scott and Beth’s portions of the film were shot at the same exact time in their respective locations in different parts of the city. The interactions and dialogue are captured as they happen between the actors and not just assembled that way in post-production. Adrian Ellis’s original score was even recorded in real-time as the film played for even more of a challenge. It really seems as if Gavin Michael Booth was looking to emulate a real-life scenario and, in that respect, Booth absolutely nailed the look, feel, and emotion with Last Cool.

While there certainly is an air of spectacle in the decision to craft a film in such a way, Last Call is undoubtedly a brave and largely successful attempt at storytelling. While completing the film in two takes is a useful tool in promotion, it doesn’t ever feel gimmicky or disingenuous. Instead, it feels like an appropriate way to tell such a touching and very human tale that’s filled with grief and regret but also hope and forgiveness. Though Last Call does take a minute to really get going, you’re in for a poignant and heartrending experience until the time the credits roll.

*Last Call is currently showing in select theaters and virtual theaters. Check out the trailer below.*