Teen years are often difficult to navigate for both the parents and teen in question. While many families are able to work their way through whatever issues they may have, some do result in tragedy for various reasons. In the past, we’ve name-dropped films like Beautiful Boy and We Need to Talk About Kevin a number of times on this site in reference to other titles. There’s just something powerful about the relationship between troubled teenagers and their parents that effectively translates to dramatic cinema. It’s never a necessarily enjoyable experience but the emotional weight is undeniable. Writer/director Tucia Lyman’s debut feature, M.O.M. (Mothers of Monsters), is no exception as a tense thriller about the relationship between a mother and her teenage son.

The film follows a single mother named Abbey Bell (Melinda Page Hamilton) who suspects that her 16 year old son, Jacob (Bailey Edwards) is a psychopath. We see video clips of Jacob over the years as he grows from a boy who doesn’t listen to the ticking time bomb he becomes in his teen years. Abbey decides to capture as much video evidence of Jacob’s issues as possible by setting up hidden cameras around the house to document his every move. She also reaches out to her mother, school faculty, and psychiatrist Dr. Howard Arden (Ed Asner) for their opinions of her son. While they all seem to find Jacob normal, it leads Abbey to question herself but also prove that she’s not the crazy one.

M.O.M. (Mothers of Monsters) has some similarities to aforementioned films like Beautiful Boy and We Need to Talk About Kevin. It’s also reminiscent of some of the independent titles like Hate Crime and, more recently, The Fifth of November that we’ve reviewed on this site. That’s not to say that it’s unoriginal though either. Actually, M.O.M. takes a unique approach early in the film with its misdirection and skepticism about who the crazy one really is. Initially, we’re meant to side with Abbey as Jacob’s unprovoked violent outbursts are shown. As the film continues though, it does feel like Abbey is maybe a little too overbearing and eggs on some of Jacob’s behavior just to prove a point. The first hour or so of the film flies by as evidence ramps up and you anticipate what’s next for the mother and son. 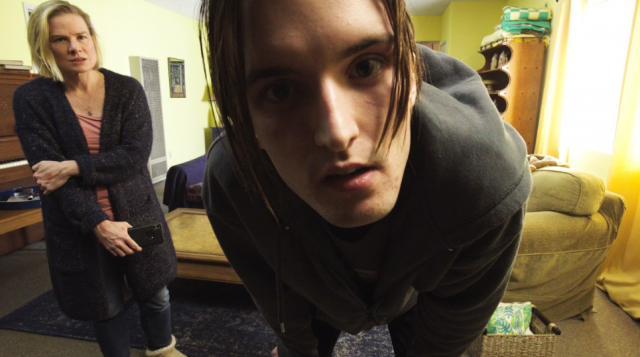 Much of the film’s success in this regard can be attributed to its cast. Both Melinda Page Hamilton and Bailey Edwards are great in their respective roles. Edwards is able to flip his emotions in a heartbeat and really gives life to the character of Jacob. In one specific scene, he goes from happy-go-lucky while talking to his Nana (Janet Ulrich Brooks) to disturbingly angry because of one statement from Abbey that he has to wait until he’s 18 to get a credit card. There are moments late in the film where the character of Jacob feels a little over-the-top but it’s more of how the character is written than Edwards’ performance. However, it’s Hamilton that really drives the film as Abbey. From the very beginning, she’s relatable and you really do want her suspicions to be proven true. Jacob treats his mother like complete trash while psychologically tormenting her at times but Hamilton portrays the character as strong-willed and persistent throughout.

It’s actually quite commendable that the characters translate so well given that M.O.M. is a found footage film. Here at Cinema Smack, we have a bit of a love-hate relationship with found footage. In most cases, it’s a cheap and easy way to pump out a schlock horror film but there have been films that do it right too. Previously reviewed indie features like Strawberry Flavored Plastic and Hell House LLC have offered unique takes as documentary style fiction films. This film, though, is more in line with the critically acclaimed theatrical release, Searching, in that it uses its found footage as a means for storytelling instead of just a style. Events are shown as video clips on a computer that all contribute a piece to the overall story. From the clips, we learn about Jacob’s childhood, his current status as a high school student, and even Abbey’s distressing past. The best thing about the found footage style is when a viewer is able to forget about it and just absorb the story unfolding onscreen. Thankfully, it’s used perfectly by Lyman and company for this film.

That being said, the film doesn’t go unblemished. Firstly, the name is pretty iffy. Either M.O.M. or Mothers of Monsters would’ve been suitable titles. It feels like no one could make a definitive choice so both got shoehorned into the title. This is a nitpick but, for marketing purposes, the title feels too long and messy. The main issue, though, is with the ending. As previously mentioned, the first hour cruises by but the last half hour falls into some typical found footage horror tropes. Jacob gets far too wordy and manipulative with such an elaborate plan. It doesn’t really make sense for a character fueled by rage and unpredictability. For the most part, M.O.M. isn’t really a horror film either. It’s a thriller. Therefore, the more horror-esque ending feels a bit uninspired and misguided from where the film initially seemed to be heading.

Regardless, Tucia Lyman does a very solid job with her debut feature. Sure, there’s room for improvement with a tighter ending to the story but M.O.M. (Mothers of Monsters) keeps your attention from start to finish. The found footage style is effectively used and never feels cheap or unnecessary. With a lesser cast, a film like this may not have worked but the inclusion of both Melinda Page Hamilton and Bailey Edwards offset a potential issue there as well. As an overall experience, M.O.M. is tension filled and positively erratic. There are some hiccups towards the end but it’s certainly a film worth checking out.

*M.O.M. (Mothers of Monsters) was in the midst of a week-long run at the Arena Cinelounge prior to the theater’s shutdown due to the COVID-19 pandemic. It’s currently available to rent or buy here on Amazon Prime. Click here to check out the trailer on YouTube.*