One of the best things about short cinema is how filmmakers find ways to wow an audience in such a brief time period. Short filmmaking covers every emotion and genre and so many of them are still able to match their feature length counterparts in passion and execution. The same goes for Ewurakua Dawson-Amoah’s recent short, Just Scream. The writer/director excels in providing a realistic account of an unspeakable act with plenty of care, earnestness, and intensity to captivate viewers.

The film opens with Carl Peterson (Timothy J. Cox), an interviewer, instructing a film crew as he prepares for the arrival of his guest. Emma Clarke (Ewurakua Dawson-Amoah) makes her way to the set for the interview and the cameras begin to roll. Carl asks her questions about her relationship with a man named Micah Evan. As she reveals her tragic history, Carl rudely interrupts and seems uninterested in the story she’s trying to tell. However, Emma refuses to lie down and let her voice go unheard any longer.

The plot of the film is as simple as can be and, in the case of Just Scream, that’s not a bad thing. It’s merely a woman in a room telling her unfortunate story. Throughout the film, Carl frequently cuts Emma off with directions for the crew and suggestions for her to speak up, provide certain information, or just interrupt with questions. While Emma plays along at first, she quickly realizes that Carl has no intention of actually hearing her words. To him, it’s just to draw attention to the show as opposed to being something therapeutic for his guest. There are so many times where we see these kinds of conversations in daily life and it leaves you to wonder why someone even bothers to ask questions if they don’t want to hear the real answers. Sometimes all people are looking for is for someone to listen and not necessarily for responses, attention, etc. 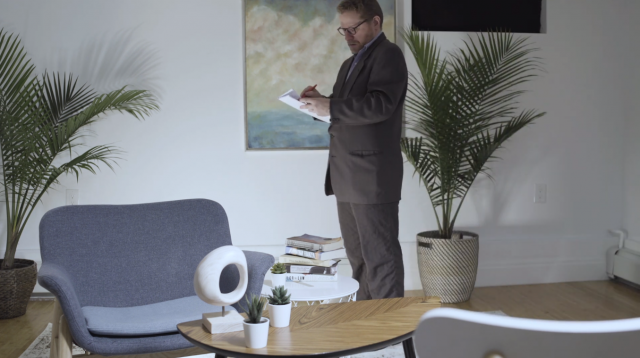 Like the story itself, the technical aspects of Just Scream are also barebones. As you can see from the included images, the location is just one room and one shot. There are no cuts throughout the entire ten minute film but there’s some minor, and effective, camera movement. The only movement comes from a slow zoom onto Emma as her story becomes more and more personal. The zoom excludes Carl and puts the spotlight firmly on Emma as it should. It’s pretty rare for scenes to be shot in one continuous take. Most recently, the Oscar nominated war film, 1917, boasted many long takes with the illusion of being shot in real-time. Another film that comes to mind is Steve McQueen’s 2008 film, Hunger. In that film, there’s a 17+ minute shot which is truly a spectacle with nothing but tense dialogue driving the scene. Here, Just Scream takes a similar approach and further pushes its overall message and serious subject matter because of it.

When it comes to cast and crew, Just Scream is pretty tight knit. Timothy J. Cox is in usual rock solid form as interviewer Carl Peterson. As previously mentioned, Carl continuously interrupts Emma with trivial requests, questions, and details as she struggles to relay her vivid memories. Cox is excellent in the role as he hits all the right notes to appear sympathetic to Emma while really only caring about getting what he needs for a successful interview. In contrast, Ewurakua Dawson-Amoah’s portrayal of 22 year old Emma feels very real. Initially, she plays along with the structured nature of the interview that Carl leads. However, the longer the interview lasts, the more emotional she gets. The highlight is the climax of the film where Emma finally lets loose after feeling downtrodden and almost attacked. Like Cox, Dawson-Amoah hits all the perfect notes for this type of story and you see the evolution of an empowering character through one continuous scene. 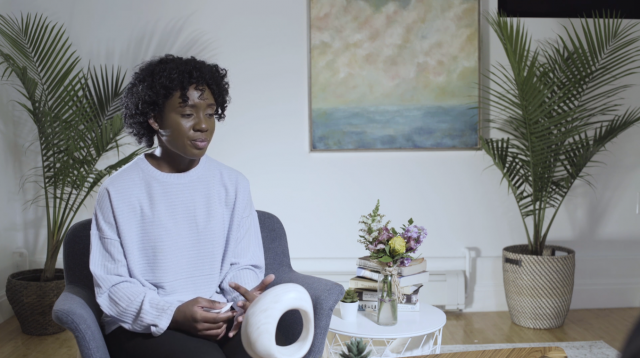 There are some small nits to pick with the film though. One of them is the audio. For most of the film, it’s not too bad but does carry a slight echo. During some of the louder dialogue, there are moments where the audio distorts. Again, it never gets too bad but shouldn’t go unmentioned. Another thing is that the story of Just Scream is basically what you’d expect overall. On one hand, it’s kind of difficult to fault it for this since it’s very relevant and emotionally powerful. On the other though, it feels like something that has been seen and explained by many real victims of crimes and humiliating events. The film does a good job of providing a strong and resilient voice but without a unique spin on the subject.

That being said, the highlight of Just Scream is definitely the dynamic performance from its writer/director/star, Ewurakua Dawson-Amoah. She goes through such a range of emotions from subtle to outright defiant over the film’s brief runtime. The performance is meant to give a voice to the voiceless and, in that, it certainly succeeds. Then, you add in the talents of Timothy J. Cox as a type of impassive pseudo-adversary and the film’s even more compelling. From start to finish, Just Scream intrigues, upsets, and empowers all in the span of a concise ten minutes.