The human mind tends to be one of the most intriguing, but also dangerous, things a person can delve deeper into. This is especially true in cinema where films like The Matrix, Eternal Sunshine of the Spotless Mind, and Inception have all built something of a playground for their respective characters to inhabit and manipulate. When it comes to the mind, a filmmaker’s only limitation is his/her own imagination. In the case of Michael Bachochin’s new feature film, Parallax, the writer/director crafts an experience for viewers that’s mysteriously unsettling as well as curiously captivating.

Parallax centers on an artist named Naomi (Naomi Prentice) who wakes up in an unfamiliar reality. She can’t remember anything about her life or her fiancé, Lucas (Nelson Ritthaler), who tries his best to fix their now broken relationship. Plagued by nightmares of drowning in an abyss, the only solace Naomi feels is from painting. This comes naturally, and almost instinctively, to her while also transporting her to the beautiful, picturesque locations of her artwork. Though, she always violently wakes to the reality of which she has no memory. Slowly, pieces of Naomi’s life come back to her as she explores the worlds of her paintings. Supported by the open-minded Lucas, Naomi regains a grip on what could be her sanity and true identity.

Alternate realities and missing identities is often a staple of science fiction cinema but Bachochin is able to make it feel fresh here in Parallax. The film seems to have a lot of influences but channels all of them very well without feeling like a copycat. There are elements of David Fincher’s cult classic, Fight Club, and Christopher Nolan’s Memento as Naomi narrates a portion of the film. Like the Narrator with his insomnia or Leonard Shelby with his amnesia, Naomi questions her reality and the uncertainties she faces due to her own memory loss. In addition, Parallax also feels a little like the late Joel Schumacher’s 2007 film, The Number 23. Jim Carrey’s Walter Sparrow obsesses over a book that he feels is based on aspects of his life. Naomi has obsessions of her own as she constantly returns to the alternate realities of her paintings where she’s trying to put the pieces back together of how she got into her current situation. Finally, there are a lot of similarities to Nolan’s Inception with the paintings doubling for the dream world that Nolan creates. 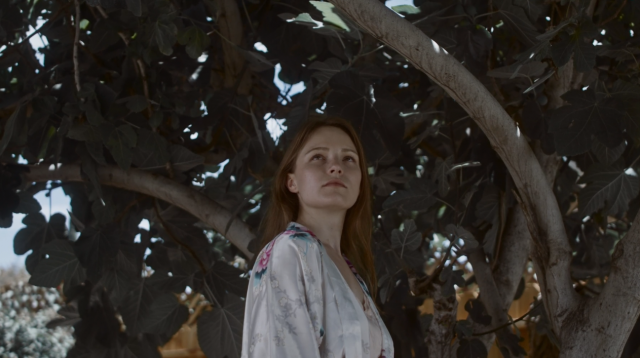 Even with a seemingly long list of influences, Parallax always manages to remain its own beast. While it’s a bit of a slow burn, the deliberate pacing, attention to detail, and an excellent atmospheric soundtrack from Aaron Gilhuis will keep viewers invested throughout the entire mystery. The storytelling by Bachochin drops just enough nuggets of information to keep stringing you along as you discover what’s really happening just as Naomi does. There are plenty of times when you’ll be confused but it’s not necessarily bad confusion. Again, it’s the type that keeps you intrigued as to what’s going to happen next. The film also does well to keep you familiar with the locations, paintings, and other items that come into play. In some films that use a lot of misdirection, it’s good to lay all the cards on the table so that an audience has a general guideline to follow through the story. At times, Parallax may lose you but never completely and you’ll almost always be able to find your way back just as the characters themselves do.

Another strength of Parallax is its small but talented cast. Naomi Prentice does a great job as the troubled Naomi. Initially, she shows very little emotion as she doesn’t recognize her surroundings and acts as if she knows that this isn’t her reality. Though, she doesn’t know what actually is her reality either. She’s something of a lost soul with the seeming ability to travel time and space similar to Hugh Jackman’s Tom in Darren Aronofsky’s The Fountain or Billy Crudup’s Dr. Manhattan in Zack Snyder’s Watchmen. Whether she’s actually able to achieve such feats is part of the mystery of Parallax. Nelson Ritthaler is very solid as Lucas who’s very supportive of his fiancée despite not understanding what’s going on with her. Prentice and Ritthaler have a believable chemistry and, even though Naomi claims to not remember Lucas, there’s almost a hint of recognition between the two. She inherently trusts Lucas to help her and their relationship is a selling point of the film. Hattie Smith and Ted Gianopulos also have pivotal roles with Smith’s entrance being a particular turning point for Naomi. It’s also one of the most eye opening moments for the audience as well. 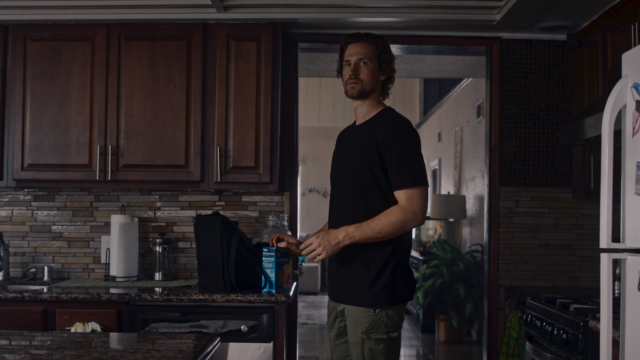 The only thing really holding Parallax back from realizing its full potential is the pesky ending. It’s definitely not bad as it keeps you wanting more but it seems like too much too soon. Bachochin takes his time captivating the audience over the course of the film’s nearly two hour runtime and then, all of a sudden, Parallax feels like a completely different movie. By the time you hit the last ten minutes or so, you’ll feel like there’s not enough time left to properly wrap up Naomi and Lucas’s stories. Again, the ending isn’t bad but it just feels rushed. Especially after such a gradual and calculated buildup, Parallax doesn’t quite give you the answers that you seek.

Even so, Parallax is one of those films that may require multiple viewings to really get the full scope of it. Like Fight Club, Inception, or any of the other aforementioned films, misdirection and ambiguity are staples of this type of sci-fi. Bachochin’s film has these things in spades and should have viewers catching new things in subsequent go-rounds. With additional viewings, the overall score may very well go up but this seems like a good starting point. Michael Bachochin crafts an effective, compelling, and overall original science fiction tale despite an abundance of influences. Parallax is a constant enigma in which viewers will always be longing to see how deep the proverbial rabbit hole goes.

*Parallax is currently showing in select theaters. Check out the trailer below.*