It’s not often that a horror film can mix multiple genre tropes into one package. For example, some films may have gratuitous violence with no suspense. Others may be heavy on scares but never really offer anything of substance in terms of story. When it comes to Brian M. Conley and Nathan Ives’ new film, The Basement, it surprisingly has a good mix of all things horror. It’s heavy in psychological torture and doesn’t rely on jump scares to draw reactions from its audience.

The film sees a wealthy, young musician, Craig Owen (Cayleb Long), kidnapped by a notorious serial killer known as the Gemini Killer. Craig wakes up tied to an old classroom desk in a dark basement. Shortly after, the Gemini Killer AKA Bill Anderson (Jackson Davis) makes his first introduction as Baylee the Clown. Soon, Craig discovers he’s part of a sick role-playing game. Bill makes trips up and down the stairs and returns each time as a different character. He puts Craig into the role of the killer and even refers to him as Bill. Throughout the course of the film, Bill takes on roles enacting his own capture, conviction, and sentencing of his crimes with Craig as his surrogate. Meanwhile, Craig’s wife, Kelly (Mischa Barton), worries about her husband’s disappearance and seeks solace from her friend, Bianca (Bailey Anne Borders).

While The Basement is most definitely a horror film, it has a lot of thriller elements. It takes notes from psychological thrillers like The Silence of the Lambs and Seven. When it comes to Billy’s dissociative identity disorder, whether it’s real or it’s just his way of tormenting his victims, the film feels a lot like M. Night Shyamalan’s Split. There are also instances of gore and brutal torture that bring films like Saw and Hostel to mind. Luckily though, The Basement never outright steals these elements or feels like a carbon copy of other horror films. It simply borrows ideas and implements them in its own way. One last note is that the part with Baylee the Clown brought to mind the Kevin Smith-produced clown thriller, Vulgar. Needless to say, that wasn’t a comparison we expected to make today. 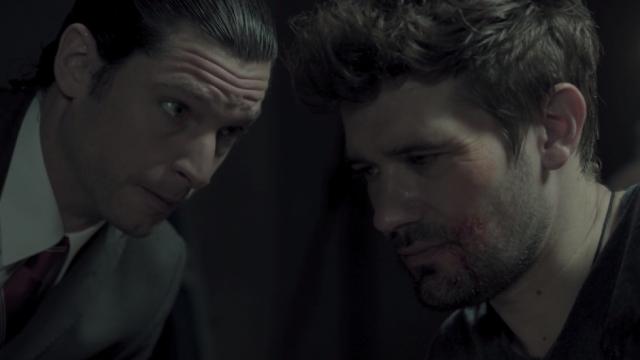 The evolving role-playing story throughout The Basement is engaging but it’s the acting that’s the crux of this film. Both Jackson Davis and Cayleb Long as Billy and Craig respectively are excellent. The interactions between the two are laced with tension and overall suspense. Davis especially is such a loose cannon as his character(s). Like Kevin Spacey’s John Doe from Seven, Bill appears to be in charge throughout the story. Yet, there are moments where it seems like Craig may be getting to him. As a viewer, you’re just never completely sure as to who has the upper hand at any given moment. Every new character introduced by Bill is exciting to see and figure out their respective role in Craig’s fate. It’s actually reminiscent to Sacred Heart, another recently reviewed independent film on this site. Both films have an excellent back and forth character dynamic between their leads.

That being said, there are some questionable things about the film as well. One thing that’s kind of distracting is that Bill has a large Gemini symbol tattooed on his arm. While it does come into play during the film, it seems too obvious. If there was a real-life Gemini Killer with a giant Gemini symbol tattooed on his arm, this would be a huge red flag for police in terms of distinguishing marks. Maybe we’re looking too much into it but it’s hard to take him as a murderous mastermind with such a dead giveaway. In addition, there’s a quasi-side plot in the film with Mischa Barton’s Kelly trying to locate her husband. Barton isn’t bad in the role but it seems tacked on. This is especially concerning as she receives top billing in The Basement. You’d expect her character to do a little bit more. 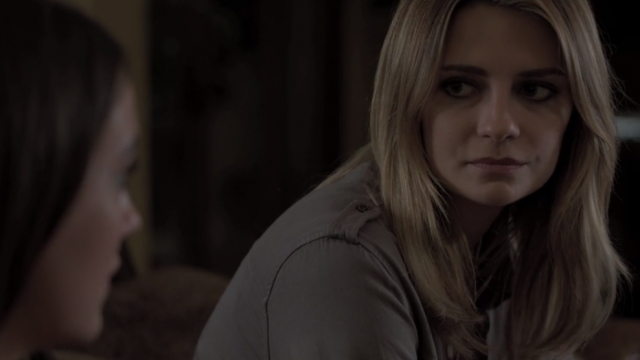 Though, the biggest problem in general with The Basement is its ending. It’s extremely predictable. As always, the ending of the film won’t be ruined here and this will be kept somewhat vague. The characters frequently drop hints throughout the story that clue you in on the mystery. The problem with this is that the clues aren’t all that subtle. As the film continues, you see characters beginning to fracture and reveal their true nature. While this is definitely a useful filmmaking tactic in horror and thrillers alike, again, it’s just too obvious here. By halfway through the film, you should pretty much know what’s going to happen.

Regardless, The Basement is a very solid independent horror flick. It should be noted that this isn’t the same Gemini Killer that’s from The Exorcist III. Yet, this Gemini Killer moniker is interesting and you almost wish you could see more of its origins. While Mischa Barton’s character feels like an afterthought at times, the performances from Cayleb Long and Jackson Davis especially give the story life. Also, the torturous moments aren’t overly gratuitous but aren’t for the faint of heart either. They’re uncomfortable to watch but not as bad as some of the scenes in Hostel or Lars Von Trier’s Antichrist. Overall, The Basement is a satisfyingly effective horror/thriller for fans of the genre. Its tense interactions between the two leads should be able to hold your attention throughout despite a predictable ending.

*The Basement is available now to watch on various on demand platforms such as Amazon and iTunes.*