From one difficult film to another this week. Yesterday, we reviewed Spike Lee’s Da 5 Bloods which was a very emotionally powerful film littered with racial tension but suffering from having a little too much plot. Controversy continues today with Mark Jackson’s newest film, This Teacher. This time, religious tension, lack of self identity, and a case of maybe not having enough plot at times are the discussion points. Though Jackson’s film certainly opens a dialogue on a number of issues and tests its audience, it sometimes feels as confused as directionless as its female lead.

This Teacher focuses on a young French Muslim woman named Hafsia (Hafsia Herzi). After traveling from Paris to New York to visit her childhood friend, now known as Sarah (Sarah Kazemy), Hafsia realizes how much she’s changed. The reunion doesn’t go over so well and Hafsia retreats to a rustic cabin in the woods. However, her peaceful escape slowly devolves into a nightmare as Hafsia experiences bouts of self discovery, intolerance, and ongoing prejudices in contemporary America.

The first thing that viewers should know about This Teacher is that it’s a very challenging watch. No, it’s not difficult because of things like violence, gore, boredom, or just ugly filmmaking. Hafsia’s time in the United States is full of discomfort and lack of understanding or purpose. Her and Sarah have little in common. This is so much so that Sarah doesn’t really like having her around as she’s reminded too much of home. Hafsia Herzi puts in an excellent performance as she’s lost in an unfamiliar place with people she doesn’t understand while looking for something that she can’t necessarily describe. She’s the obvious standout with a timid but sometimes wildly chaotic performance that’s sure to land her more starring roles going forward. Seeing her struggle throughout the film can be maddening but it’s also something that many people who may lack direction can sympathize with. Who are we, how did we get to this point, and what’s our purpose in life? That’s for the individual to discover for themselves. 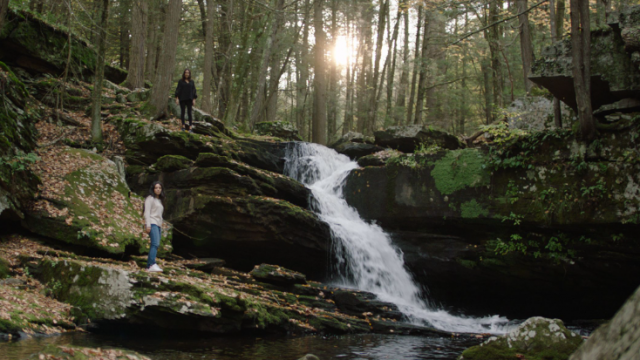 Before we delve into the plot more, let’s discuss the technical aspects of the film. Mark Jackson is no novice when it comes to filmmaking. Prior to This Teacher, Jackson wrote and directed Without in 2011 and War Story in 2014 to varying degrees of success. For War Story, he even worked with transcendent acting talents like Catherine Keener and Sir Ben Kingsley. His previous experience helps him craft a technically impressive film in This Teacher. Jackson makes the most of his locations and really develops a lush forest setting that’s as disorienting and ominous as it is beautiful. The location feels somewhat reminiscent of Lars von Trier’s Antichrist but, of course, this film isn’t nearly as controversial or upsetting as that one. Cinematographer John Barr also deserves a lot of credit for making this film come to life visually with its isolated beauty and excellent camerawork.

When it comes to plot, This Teacher feels a bit dragged out. There’s a lot of meandering as Hafsia arrives and tries to accustom herself to American life. It seems as if she expected things to be the same with Sarah upon her arrival but her friend is too preoccupied with her wealthy boyfriend, Heath (Gabe Fazio), along with her social life and hopeful acting career. Then, the film turns into something else completely as Hafsia relocates to the cabin where she struggles to survive on her own. She has run-ins with the caretaker of the cabins, John (Lev Gorn), as well as a promiscuous married couple, Rose (Lucy Walters) and Darren (Kevin Kane). There’s intrigue sprinkled into most of the scenes but it’s too often that the events seem disjointed. Perhaps a short film would’ve been a bit more focused overall instead of a feature. 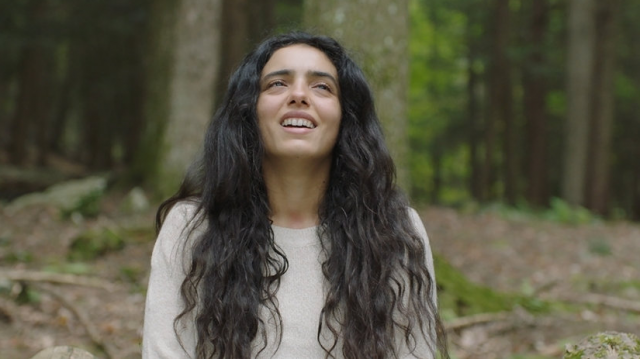 This brings us to the biggest issue of This Teacher. It’s difficult to decide what this film is actually about most of the time. It seems to be all over the place with different themes scattered throughout most of its runtime. Is the film about racism and racial relations in the modern day? Is it about the continuing fear of Islamic threat in the United States and the continuing damage from the events of September 11th, 2001? In addition, This Teacher seems to discuss a person’s lack of identity. Who is Hafsia and how do people discover their purposes in life especially when they’re so far from home? How about the dangers of alcohol consumption? Much of the film’s climax is a product of misunderstanding and heightened emotions due to alcohol. If one were to guess, This Teacher is a little bit about all of this. Yet, that’s just too much to cram into one story especially when it’s hard to tell if anyone has really learned anything by the film’s end.

Although This Teacher may not be the atmospheric nightmare flick that its brief plot outline describes, there’s still plenty of merit to the film. Even after nearly two decades of time has passed since the terrorist attacks on September 11th, there’s still a fear of Muslims, Islam, and the Middle East in general from some people. This is enough of a premise to craft an intriguing film. Couple that with a journey of self discovery for a foreign woman in an unfamiliar country and the film had plenty to work with. Viewers will certainly sympathize with Hafsia throughout the film. However, her character doesn’t seem to grow in the way that was perhaps intended. Instead, Mark Jackson tries to do a little too much with This Teacher and, in turn, ends up with a film that confuses more than critiques.