As we’ve discussed numerous times on this site, 2019 has been a trying year for theatrical releases. At this point, it may be getting old to continuously mention it but it’s truly a terrible year for big budget cinema. Luckily though, there have been some solid independent titles that have come our way in 2019. There’s just something different about indie filmmaking as a lack of budget forces filmmakers to focus more on building characters to lead you through an engaging story. With Mark Wilson’s debut feature, Wade in the Water, we may have found the best of the bunch. The film is a dark dramedy with a discussion about human nature, interaction, and relationships at its emotional, yet moral, core.

Wade in the Water stars Tom E. Nicholson as an unnamed heavy man, dubbed Our Man in the film’s credits. Our Man appears stuck in a bland routine of visiting the local burger joint, working his job from home as a bill collector, watching old westerns, and masturbating. Then, he unintentionally receives a package in his post office box that holds a dark secret. Our Man is horrified by what he sees and decides to further investigate into where the package came from. In doing so, he eventually forms an unlikely bond with Tilly (Danika Golombek), a young woman indirectly affected by the contents of the package. Throughout the film, the duo learn more about each other and, strangely, find solace within one another.

When it comes to the plot of Wade in the Water, it must be kept vague. To go more in depth would be to drop some major spoilers and that’s not the intent of this review. The story, written by Chris Retts, isn’t overly complicated by any means but there’s something special about it. It takes its characters, as well as viewers, on a kind of existential journey of self discovery and morality. The events that lead up to the improbable pairing of Our Man and Tilly are atrocious. However, there’s a strange link formed between the two characters because of them that’s strengthened in nearly every scene. They’re two people who are essentially on opposite moral grounds. Yet, their unique situation, complete with struggles and confusion, unite them. Strangely, the film is also quite funny. Though, its comedy will often have you almost feeling uncomfortable for laughing during some of its most morbid moments. 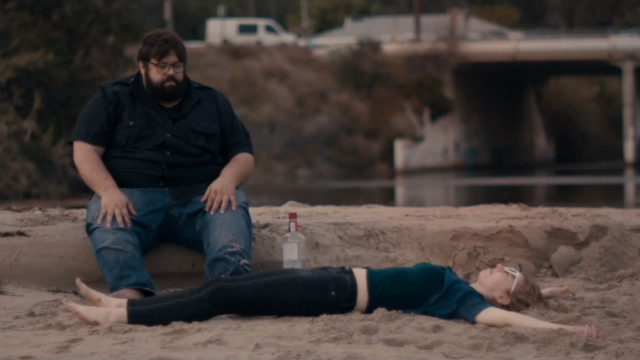 The technical aspects of the film play an integral role in relaying this quirky tale. While Wade in the Water takes place in California, the locations feel as if they could be anywhere. There’s nothing especially spectacular or “cinematic” but Wilson’s eye for interesting shots and the fantastic camerawork throughout the film fully explore every location. Wilson also does a great job serving as the film’s editor. His transitions and cuts enhance the darkly comical nature of such an emotional story. Additionally, the cinematography from Thomas Rose perfectly fits the film’s content. Images are sharp and appealing with some genuinely striking visuals burning themselves into your mind. Even the film’s original music from Jacob Boyd, as well as The Salem Travelers’ version of the spiritual “Wade in the Water,” are highlights.

The true heart and soul of Wade in the Water lies in its two main characters. Tom E. Nicholson doesn’t fit the mold of your typical lead actor. As Our Man, Nicholson is an unassuming every man imprisoned by the mundanity of his own life. Upon receiving the package, he discovers purpose and the self gratification of playing a hero. Nicholson is excellent throughout the film as he expresses his insecurities and failures through his facials and body language. Then, there’s Danika Golombek’s Tilly. Golombek is absolutely electric onscreen whether she’s spouting heartrending dialogue, sitting quietly, or goofing around on a beach. Tilly is going through so many uncertainties and emotions internally but remains stoic externally. There’s much more to her character than meets the eye. The intricacies of both her and Our Man frequently go unspoken. Yet, it’s shockingly easy to understand what both of them are thinking and feeling at all times. This film is definitely a case of showing as opposed to telling when it comes to its characters and story. 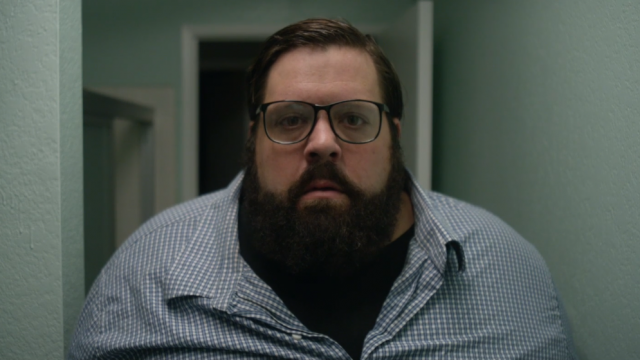 As is the case with a lot of indie film, Wade in the Water may not be for everyone. Again, the darkly humorous, yet dramatic, nature of the story isn’t going to sit well with some viewers. In addition, the film is definitely a slow burn experience. Just shy of 90 minutes, some will think that it’s much longer. There are scenes with very little dialogue and sometimes there just isn’t a lot happening physically with the characters. If you’re looking for something grandiose with a lot of flair and pizzazz, you’re in the wrong place.

As previously mentioned, Wade in the Water‘s best moments feature the deeply emotional complexities of its characters. There really aren’t many films like this out there. Unlike a lot of indie films, no major creative influences come to mind other than maybe a slight Taxi Driver vibe. Rest assured though, Wade in the Water is no Taxi Driver. It’s entirely its own beast. The film is a righteous study of human understanding and acceptance of their fellow man even in the most dire of circumstances. For this, Wade in the Water is one of the best indie films, and quite possibly, one of the best films of 2019 in general.

*Currently, Wade in the Water is currently submitting to film festivals and seeking distribution per the film’s website located here. Check out the trailer for the film below.*