It’s been two and a half weeks since Halloween but the horror continues here in 2020. With theaters either running limited screenings or still shuttered, new theatrical releases are few and far between. However, there’s been no shortage of brand new titles on video-on-demand services. If you actually go back through the entire year, it has largely been dominated by horror films and thrillers. This isn’t all that surprising given cheaper production costs for these types of films but moviegoers shouldn’t sleep on a lot of these VOD titles. Over the course of 2020, we’ve reviewed films like The Lodge, Relic, and Possessor which have all been standouts in their own right. Today, we cover Bryan Bertino’s new film, The Dark and the Wicked, which continues the writer/director’s penchant for chilling and effective horror experiences while not necessarily separating itself stylistically from its contemporaries.

Bertino’s name has lingered around the horror genre for some time but is never one that’s brought up regularly. His film debut came in the form of 2008’s The Strangers which received mixed reviews upon its release but has since gained a healthy following. A sequel, The Strangers: Prey at Night, was released in 2018 with Bertino sharing screenwriting duties with Ben Ketai and Johannes Roberts manning the director’s chair. In 2014, Bertino released the found footage horror film, Mockingbird, but it wasn’t until 2016’s The Monster where he’d find his groove. A deliberately paced throwback to films like Alien, The Monster also excelled as a character study as its lead mother-daughter duo remained trapped in their broken down vehicle on a forested road with a bloodthirsty beast stalking them from the shadows. While The Strangers tortured its audience and characters psychologically in the confines of their own property, The Monster did the same with nature and often relied more on what viewers didn’t see for its scares. Perhaps unsurprisingly, Bertino’s newest film is kind of an amalgamation of the two.

The Dark and the Wicked takes place on a secluded farm where some strange occurrences have taken place. A brother and sister, Michael (Michael Abbott Jr.) and Louise (Marin Ireland), return to their family home where their Father (Michael Zagst) is basically comatose and slowly dying while their Mother (Julie Oliver-Touchstone) appears to be having a complete psychological breakdown. Soon, it becomes evident that malevolent forces may be lurking around the farm as each member of the family experiences their own unexplainable and terrifying events.

As was the case with Bertino’s previous films, the plot of The Dark and the Wicked is kept simple, effective, and isolated from the outside world. There’s very little influence coming from anyone outside the main cast members. Though, Bertino usually does have an outsider or two appear for a sort of “turning point” moment in his films. Regardless, it’s in this isolation that the true horror of Bertino’s work lies. His characters are always by themselves in a foreign place. Yes, in both The Strangers and this film the characters are in a familiar setting (i.e. a childhood summer home and the family farmhouse respectively) but the main characters aren’t in their own homes. In a way, the characters are invading a space that’s been claimed or has attracted another being or force. Therefore, they’re the ones receiving punishment. 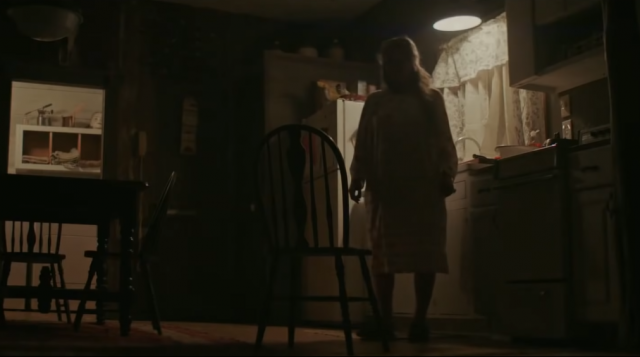 What really makes The Dark and the Wicked click is Bertino’s use of mood and atmosphere to create quality scares. The film starts out simple enough with noises that don’t seem uncommon in an old, rustic farmhouse. Though, the noises often seem to speak to the more vulnerable characters causing them to act on violent impulse. The characters often suffer from what could be described as hallucinations or possibly just your typical haunted house activity with people appearing/disappearing, objects moving, and nightmares. The film is also one of those rare instances where viewers don’t really need an explanation as to why these things are happening to this particular family. Similar to films like The Exorcist, The Dark and the Wicked is more experience than it is being driven by a particular motive. The viewer’s job is to simply take the ride with the characters.

Speaking of the characters, the few that are here are quite good. Michael Abbott Jr. and Marin Ireland as Michael and Louise respectively do an excellent job as they try to hold themselves together as they’re each suffering from complete mental breakdowns. The presence on the family farm tortures them both separately with neither wanting to admit that they’re losing their hold on reality. Ireland especially stands out as Louise is tormented with some of the worst that the house has to offer and her reactions sometimes rival those of Toni Collette in 2018’s Hereditary. As for the rest of the cast, Michael Zagst doesn’t have much to do as the dying Father but he’s always a source of unease and tension as he lies motionless in bed. It feels like any time he’s onscreen, something’s about to happen. The same can be said for Julie Oliver-Touchstone’s Mother who’s a complete shell of herself by the time her children arrive to care for her and her husband. Xander Berkeley and Ella Ballentine, who does a phenomenal job in Bertino’s The Monster, also have small, but memorable roles which add to the film’s mystery. 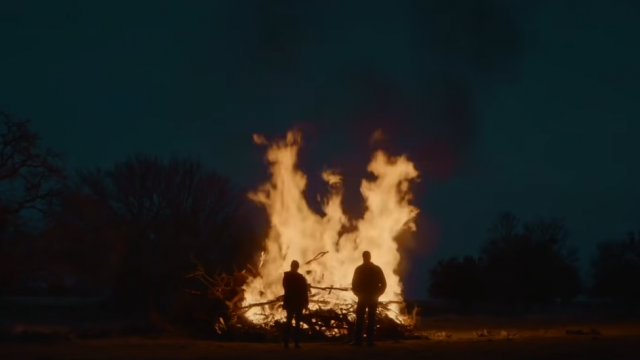 However, this does lead to questions about what The Dark and the Wicked is actually about. As previously mentioned, there’s little explanation as to what’s happening or why. While a little ambiguity can be a good thing (and it doesn’t completely ruin the overall experience here), it’s hard to get really invested without knowing more. What’s the history behind this particular family? Are there sordid events that have happened in their past? Where’s this supernatural presence even coming from? There are a ton of questions to ask that the film doesn’t feel intent on answering. Additionally, a lot of what makes the film so intriguing are things that we’ve already seen done better in other recent films. Essentially, The Dark and the Wicked is a combination of Robert Eggers’ The Witch and Ari Aster’s Hereditary with a tiny splash of something like Mike Flanagan’s Oculus in certain parts. There’s the haunting presence on a rural family plot of land like there is in The Witch and the mysterious broken family dynamic from Hereditary on full display. While Bertino’s film doesn’t feel like a carbon copy of anything, it will almost certainly remain firmly in the shadows of its contemporaries.

That’s not to say that The Dark and the Wicked isn’t worth your time though. Actually, if you’re a fan of slow burning psychological collapses like The Witch and Hereditary, then you should definitely check out this film. It does just enough to not feel like its cashing in on others’ recent successes while also providing genre fans with an intensely creepy horror experience here in late 2020. As a filmmaker, Bryan Bertino appears to take a lot of influence from other films but he adapts them tastefully to his own work and has been quite consistent with his short film resume. Even though The Dark and the Wicked won’t blow you away with its originality, it still comes as highly recommended especially in a year without many marquee titles.

*The Dark and the Wicked is currently available for rent or purchase on video-on-demand services like Amazon, Google Play, Vudu, and YouTube. Check out the trailer below.*