Here’s something that might blow your mind. Sofia Coppola’s universally acclaimed romantic dramedy, Lost in Translation, is seventeen years old. Seventeen! Released in 2003, Lost in Translation was the film that really put the daughter of Francis Ford Coppola, director of only two of the greatest films ever made in The Godfather and The Godfather Part II, on the map. The film landed a handful of Oscar nominations, including Best Picture, while netting a Best Original Screenplay win for the younger Coppola. Since then, she has yet to match the heights of her 2003 film again despite becoming a consistent and quality filmmaker. However, she does come very close by reuniting with her Lost in Translation star, Bill Murray, for another citywide adventure in the Apple TV+ exclusive, On the Rocks.

Back in November 2018, Apple announced that they had partnered with independent studio A24 for a slate of original films that would be released exclusively on the Apple streaming service. Coppola’s On the Rocks is the first film to be released under that partnership. Over the years, A24 has really stepped up their game with some fantastic releases including Ex Machina, Good Time, and The Farewell along with Oscar nominees/winners like Room, Moonlight, and Lady Bird. Then, there’s also the impressive horror resume the company has built with films like The Witch, The Monster, and Hereditary that has really resurrected the genre as a whole and brought credibility back to horror. Coppola isn’t a new name to the A24 family as her 2013 film, The Bling Ring, was one of the company’s first releases. The reunion of A24 and Sofia Coppola feels like something of a no-brainer as A24 films typically have an auteur quality to them. Couple this with Apple clearly wanting to make an impact as a legitimate platform for quality cinema and the partnership seems like a match made in heaven.

On the Rocks centers on Laura (Rashida Jones), a wife and mother to two young girls, as she’s stuck in a professional and personal rut. Failing to make progress on the book she’s writing, Laura also feels a growing distance between her and her husband, Dean (Marlon Wayans), who’s constantly traveling for work. As her birthday nears, Laura’s successful playboy father, Felix (Bill Murray), fuels his daughter’s suspicions that Dean may be having an affair. Laura and Felix start trailing Dean and monitoring his supposed work engagements while forging new memories together and even revisiting troubled parts of their own pasts.

Again, the story and execution of On the Rocks feels very much like Coppola’s work on her 2003 film. Though, there are definitely a handful of differences. In Lost in Translation, two Americans find themselves lonely and estranged from their significant others while in Tokyo. Murray’s Bob and Scarlett Johansson’s Charlotte take up a unique relationship with one another that may be interpreted as more than being just friends. On the Rocks differs by having the film’s main relationship being that of a father and daughter. It actually works astoundingly well and never feels like it’s ripping off its spiritual predecessor. The impressively sprawling locale of Tokyo is also swapped for something more familiar as New York City is the backdrop for this film. While a certainly less interesting  location for domestic audiences, the story of On the Rocks is much more grounded with Laura’s husband being the jet-setter as she’s stuck at home raising their children. 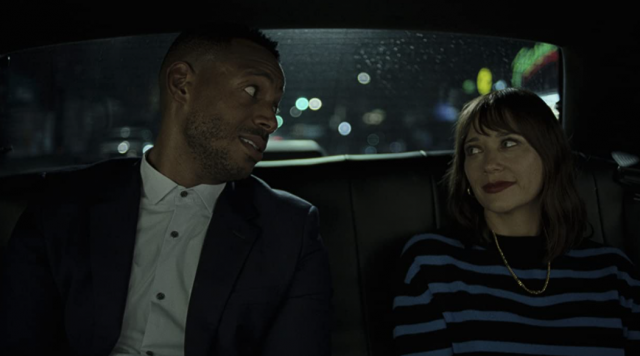 One thing that isn’t so different from Lost in Translation is Coppola’s knack for wonderful characters. Everyone in this film is just so damn charming. Rashida Jones is perfect as Laura, a woman who never forgets her responsibilities to her family but can’t help but feel she’s being cast aside. Still very much in love with her husband, Jones’s Laura is creatively and personally stifled while serving as something of a single parent given Dean’s busy schedule. It’s only when Bill Murray’s Felix arrives on the scene that Laura begins to indulge a little. As always, Murray proves why he’s one of the most beloved actors on the planet with his charismatic and hilarious performance as Felix. He’s constantly going over-the-top to impress onlookers while being unable to not flirt with every woman he comes across. While both Felix and Laura have their own independent struggles, they form quite a tandem that share a very loving, yet morally different, father-daughter relationship. Even Marlon Wayans puts in a fantastic performance as he appears almost unrecognizable from his past characters. On the surface at least, Wayans’ Dean is a very loving father and husband who’s had a stroke of good luck come his way as he lives his best life as a budding entrepreneur.

Of course, though, a cast can only do so much without a quality script but that’s not something you have to worry about with Sofia Coppola. There just aren’t many filmmakers out there that can make films about people talking as compelling as Coppola. What really sets her work apart is the realism. Her characters, the scenarios they find themselves in, and their ongoing issues all feel real. The problems addressed in Coppola’s films are ones that normal everyday people face day in, day out. As you watch a film like On the Rocks or Lost in Translation, you’ll find yourself thinking about your own life or other people that have experienced similar scenarios. It’s this type of introspective cinema that often hits hardest and makes films like the seventeen year old Lost in Translation feel timeless. Given the quality of this new film, it’s not unrealistic to think that we’ll be talking about On the Rocks in similar fashion in 2037. 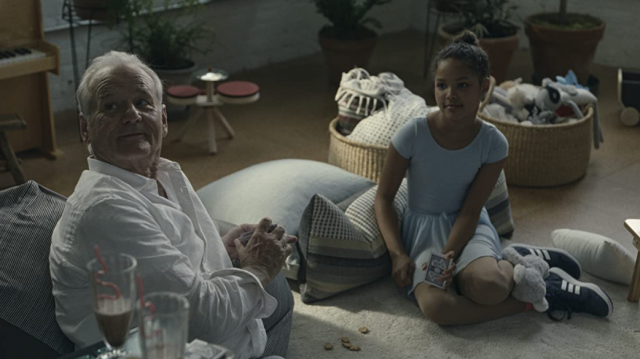 Now, this isn’t to say that On the Rocks is a better film than Lost in Translation. It isn’t. Unfortunately, it’s also the biggest knock we can give On the Rocks. It’s something of an unfair criticism except that the film is so much like Coppola’s 2003 film in some ways that it just can’t be ignored. Yet, even with its obvious similarities, it’s still probably the filmmaker’s best work since the release of her opus. The film does drag ever so slightly as the characters kind of go in circles with one another. Every day, Murray’s Felix shows up to coax his daughter out on another surveillance mission to catch Dean in the act while Jones’s Laura has the same excuses to not go. Again though, you simply can’t deny the fine character work and intoxicating performances from the cast. Even Coppola’s technical abilities have become so polished with unique camerawork and angles that you just don’t see in many films. Specifically, there’s a scene where Felix and Laura are sitting at a table having a deep conversation about Felix’s unfaithfulness in which the characters don’t even look at each other. Instead, the camera cuts back and forth between them staring off at a beautiful dusk sky. It’s such a bizarre way to film this type of scene but Coppola pulls it off while still maintaining the emotional weight of the dialogue.

On the Rocks is kind of a hard film to score. It’s the same type of dilemma we had with Wes Anderson’s Isle of Dogs. We’d score it higher if Fantastic Mr. Fox didn’t exist. As previously mentioned, On the Rocks is so much like Lost in Translation but it also feels like a wholly original experience at times too. While this new film may not be as emotional or as tight as its 2003 counterpart, it’s still a wonderful standout in a very strange 2020. It shouldn’t be faulted for not being something else even if many fans will certainly compare the two. Even if some moviegoers think On the Rocks is a little too reminiscent of Lost in Translation, it’s less of a condemnation and more of a compliment to the quality of Coppola’s filmmaking abilities. On the Rocks is an excellent film and is more than worth your time based on its relatability and performances alone.

*On the Rocks is currently available for streaming on Apple TV+.*