The miracle of childbirth is something that’s often romanticized in today’s world. As if that statement alone isn’t enough proof, people fawning over newborns and the very idea that people get “baby fever” being around children only shows that many are infatuated with the result and forget the lead up to it. Of course, childbirth is very special as things like family, legacy, and happiness come to mind for new parents. Yet, it shouldn’t be forgotten that the highest of highs is often preceded by the lowest of lows. It’s this period of time that’s the focus of director Sam Abbas’s short documentary, Marie.

The film opens with offscreen discussion about a home birth and a clearly exhausted Marie Brewer lying stomach down in an inflatable birth pool. Marie is going into labor and her 63 hour journey is captured into a brief six minute documentary short. We see her through the process as her mood ebbs and flows through relative comfort to what can only be assumed to be some of the worst pain anyone would have to go through. However, Marie is constantly surrounded by her in-home support team who are there to help her every step of the way.

The focus of Marie is interesting in that it’s only a brief snippet of what a woman actually goes through leading up to childbirth. Yet, it’s such an impactful six minutes that will make some women never want to have the same experience that Marie has. It should even make men flinch when they see the sheer agony of Marie in some of the scenes. This is a film that doesn’t romanticize the birth process. Instead of a brief hospital scene followed by a healthy newborn, Marie shows the frequent pain and anguish that a new mother experiences during brutally long labor. She’s not always in tears but there’s always a sense of discomfort and, in some of the film’s toughest moments, there’s a sort of desperation in her wanting the pain to end. 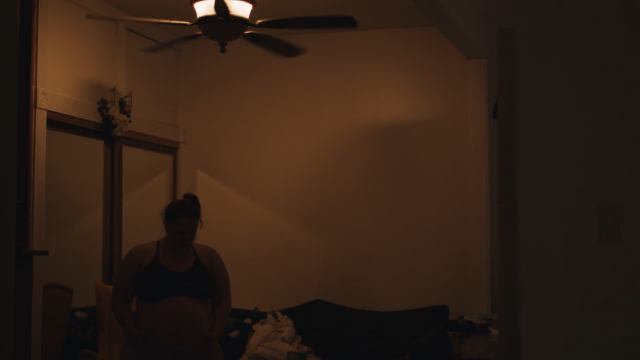 The thing that always seems to keep her going is her support team. They’re there to talk her through the process and remind her that having a community type feel is going to be the most positive experience. Even during Marie’s lowest moments, they remind her that everything’s always temporary and, at least for Marie, it works. A natural home birth certainly isn’t going to be for everybody but it feels like Marie really buys into this decision and there’s an obvious trust between her and her team. The film shies away from any anger or hostility that’s sometimes used for laughs in feature length dramatizations. Everything about Abbas’s film feels very real and shows the misery of labor in a supportively optimistic light.

While there’s nothing we can really criticize about Marie or Abbas’s approach on a general filmmaking level, the film is a little bit too short. By the time the screen cuts to black, it feels like it’s just getting started. More discussions between Marie and her team could’ve been used to pad the runtime and shine more light on the difficulties of labor. The ending feels so abrupt to the point where Marie almost doesn’t feel complete. While we don’t necessarily need the actual birth to act as a climax of the film, it just seems like there’s more to explore here.

As a statement or message about childbirth, Marie is a powerful film. You don’t get the outcome but, instead, you get the work that’s put in that eventually results in the outcome. There isn’t an opinion or agenda with the film as it only the experience at face value. Likewise, it’s not preachy about home births either. Again, it’s more about the experience of a woman in labor than anything. For that, this is definitely a film worth watching. It does feel like there’s a bit more to delve into here but, as it is, Marie is a short film that’s not to be forgotten.