Remember being a teenager? Sneaking out at night, lying to parents, spreading rumors at school, partying, engaging in promiscuous activities, and straight up rebellion are staples of the teenage/high school years. They are also very formative years where young people can start to develop into who they’re going to become. Sure, this is a bit cliched but being a teen often brings a first sense of freedom and self discovery that isn’t there at a younger age. If you pile on the pressure of Catholicism and a life of never-ending sin, you basically have Karen Maine’s feature length directorial debut, Yes, God, Yes.

The film centers on a fifteen year old Catholic high schooler named Alice (Natalia Dyer) growing up in the early 2000’s. Once an innocent AOL instant messenger chat turns unexpectedly racy, Alice starts to give in to her carnal urges despite the fear of God judging her. Additionally, Alice is rumored to have engaged in some unsavory sexual acts with a fellow classmate and becomes something of a black sheep among her peers. Along with her friend, Laura (Francesca Reale), Alice attends her school’s secret religious retreat to get back on the right path. However, the retreat challenges her more than ever as she soon discovers that she’s not the only person with secrets on the retreat. This is all while she also tries to win the affection of the star of the football team, Chris (Wolfgang Novogratz), and blend in with the rest of her classmates.

The film is actually an adaptation of the 2017 short film of the same name which Maine wrote and directed. The feature length version should be considered a rarity in that such a concise and focused idea could be expanded on in such a way that makes its source material feel almost inferior. Before anyone writes off the original, it’s definitely a very relevant and quality piece of short cinema. It’s just that Maine improves upon it in every way possible here. Religious undertones were somewhat scarce in the short but, in the feature, God has a constant all seeing eye on young Alice as religious imagery pop up nearly everywhere. The quirkiness of the source material remains but is also dialed up to inject more laugh out loud moments and scenarios. Most of the scenes in the short are recreated for this new adaptation and they just seem to be more polished. Maine’s growth as a filmmaker, despite focusing on basically the same exact story, is clear here. She simply improves upon everything from one film to the other. 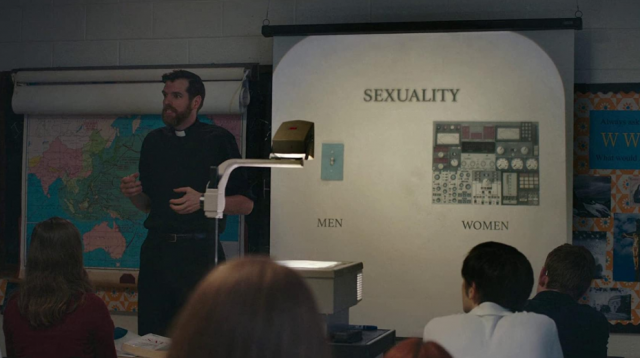 Sexuality is something that everybody deals with at one point or another and Maine’s combination of sex and religion in her film is essentially oil and water on the surface. Sex is taboo and treated as a sin but it’s also something that none of the characters in the film can seem to escape. Constant rumblings and rumors swirling about people engaging in sexual activity overtake the school and subsequent retreat while religion feels more like an obligation than a way of life. Maine combines these things with the awkwardness of being in high school and does so to great success. The bouts of self discovery, trying to fit in, and simply learning about the world largely begins as a teenager and Maine’s film captures these years perfectly.

While Yes, God, Yes was good as a short film, it’s comedic gold as a feature. Again, the awkwardness of high school mixed with a sinner’s natural urges are played to hilarity more often than not. With crucifixes and depictions of Jesus Christ aplenty throughout the film, the characters are always made to feel judged under his watchful eye anywhere they go. There’s often sexual lingo thrown around that the teens in the film are too young to actually understand. This is clear through their inaccurate descriptions of things like “enemas” and “tossing salad.” Even the film’s title is a playful, yet mildly offensive, double entendre. The only thing that may polarize viewers with the film’s comedy is the time period. For those who were teens in the early 2000’s, Yes, God, Yes, is going to feel like a trip back to your own middle/high school tenure. Things like AOL chat rooms, bands like Blink-182, and the movie Titanic, specifically the more sensual scenes, ruled a lot of people’s post-school day lives. Yet, these things are specific to that time period. For anyone that didn’t grow up during those years, some of the nostalgia and pop culture jokes may fall a bit flat. For those that lived it though, you’ll be hard-pressed to find anything this accurate anywhere else.

In delivering this amusing little time capsule of the early 2000’s, Natalia Dyer absolutely shines in the lead role. Dyer, who’s currently 25 years old, plays young Alice and wonderfully captures childhood ignorance masked by a facade of adult sophistication. Of course, teens almost always act like they know more than they actually do which is often the case with most of the characters in Yes, God, Yes. Alice’s innocently naive reactions to her new lustful experiences show the character almost in shock. Though, that initial shock turns into curiosity followed by fantasy and even a desire for experimentation. Dyer’s performance thoroughly explores all of these emotions and impulses that typically can’t be explained. All Alice can really deduce from her experiences in high school and the retreat is that maybe she isn’t the sinner that everybody believes her to be. Sinning is humanity at its finest and we all find our own ways to deal with it. 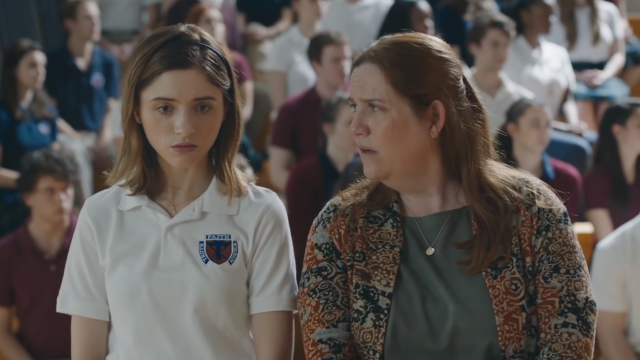 Now, it should be mentioned that Yes, God, Yes is one of those middling films that critics seem to love but some audiences will certainly despise. For anyone that’s a devout Catholic, chances are that you aren’t going to be a fan of Maine’s critique of religion. It’s often depicted as an overbearing and hypocritical group of fanatics uncomfortable with or hiding their true selves. While there definitely are some who this generalization certainly includes, there are plenty of good people who dedicate their lives to serving whichever deity they believe in. It’s likely that Catholics, in particular, have not taken kindly to the film and have condemned it upon its recent release. However, the film is sitting at a sterling 93% on review aggregator Rotten Tomatoes which indicates that those with an open mind should seek this film out.

Religious issues aside, Yes, God, Yes is an excellent feature length debut from Karen Maine. The writer/director convincingly gets her message across while boldly defying, but not denouncing, religion. Maine doesn’t appear to be saying that Catholicism is a sham and no one should practice it. Instead, there’s a way to both be human with needs and desires and also a good person seeking guidance, but not judgment, from a higher power. Of course, you don’t have to be religious to enjoy the film either as there are plenty of situational laughs to enjoy here as well. Yes, God, Yes is a film that should be viewed with an open mind and without judgment of its subject matter. It’s an entertaining tale of God, sex, and high school that’s as awkward and absurd as it is comical.

*Yes, God, Yes is currently available for rent or purchase on video-on-demand platforms like Amazon, Google Play, Vudu, and YouTube. Check out the trailer below.*