We’ve said it before on this site but it feels like every new release reiterates this same sentiment. Despite an ongoing worldwide pandemic, 2020 is a damn good year for cinema. With movie theaters across the country still closed and big name releases indefinitely shelved, people have needed to branch out to find new content to watch. Independent filmmakers and studios are hopefully reaping the rewards right now because there are a lot of quality films available right now on video-on-demand platforms and streaming services. It’s probably no surprise that we have another quality title to talk about again today. Chris Bavota and Lee Paula Springer’s new comedy/drama/horror/sci-fi/thriller, Dead Dicks, is now available to watch and, though it’s tonally inconsistent, the film is an absolute joy and fun for all types of movie fans.

The film opens with a young man named Richie (Heston Horwin) committing suicide by putting a plastic bag over his head. Richie’s sister, Becca (Jillian Harris), begins to worry about her brother after he fails to answer any of her recent calls. Becca leaves work to go check on Richie at his apartment only to find his body hanging in the closet. Oddly enough though, another Richie, who’s very much alive, greets Becca after her discovery. Somehow, Richie is stuck in a continuous loop of suicide and rebirth via a mysterious pathway in his bedroom wall. Together, Richie and Becca work to figure out what’s going on while dealing with Richie’s irritated neighbor, Matt (Matt Keyes), and the fallout of having an apartment full of dead Richies.

The story of Dead Dicks is one that’s simple but also wholly original. There are things here and there that feel reminiscent to other films but nothing that feels like a blatant ripoff. There’s a touching brother-sister relationship between Richie and Becca, despite some of the horrors they face, that brings to mind a film like 2013’s Oculus. Sticking with the horror theme, there’s a bit of a Re-Animator vibe mixed with the body swapping zombie idea from Jason Goes to Hell. There’s even one plot element that feels reminiscent to Christopher Nolan’s The Prestige. Of course, we don’t want to ruin anything so we’ll keep this section vague. Ultimately, Dead Dicks will remind you of other films but its approach remains fresh and doesn’t feel like a copy of anything. Even the film’s synopsis describes it as “Harold and Maud meets Groundhog Day as directed by Alain Resnais.” In all honesty, that’s pretty accurate. 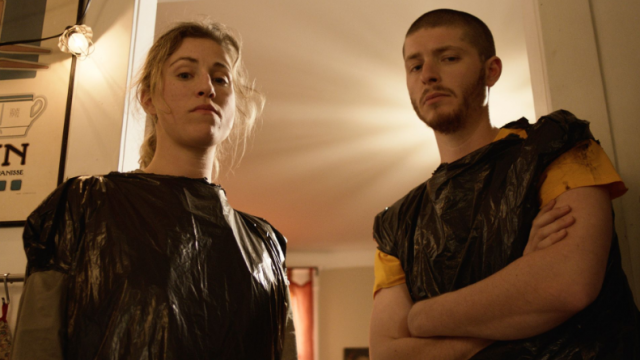 Perhaps the reason for this is in the film’s tone. Frankly, it’s all over the place. It starts out as a drama before moving into some Edgar Wright-style comedy and later venturing into the horror and science fiction genres. The writer/director team of Bavota and Springer actually do a great job no matter the tone but the inconsistency does remain the worst part about Dead Dicks. Had the film stuck to one tone throughout its runtime, it would’ve fared better overall. As it stands, Dead Dicks does everything very well but there’s too much stop-and-start. As soon as you start to get invested in the heartfelt relationship between Richie and Becca, the film turns into a laugh riot. Once you’re willing to accept it as a straight up comedy, it morphs into a horror flick. While the film is certainly a fun time from start to finish, it fails to reach its full potential because of its constant tonal shifts.

That being said, Dead Dicks is probably at its best when it’s being a comedy. Even the title seems to scream “comedy” for unsuspecting viewers. Bavota and Springer put together a very clever and uniquely amusing story about mortality and family. The shots and editing are simply hilarious at times with Richie’s well placed dead bodies providing much of the humor. The absurdity of Richie’s situation is almost inexplicably accepted by Becca, which happens often in comedies, and it does help the overall flow of the film. The characters’ reactions also allow viewers to take in the story at face value and discover the mystery along with them.  They mostly take the situation seriously without understanding what’s going on and much of the film’s humor is dry and dark instead of maybe your typical slapstick for this type of film. 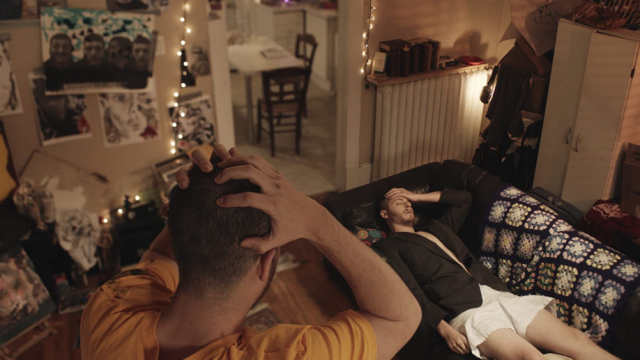 What really holds Dead Dicks together and keeps it moving along is its characters. Heston Horwin and Jillian Harris are so much fun to watch as they try to solve their bizarre dilemma. Harris’s Becca is the ever-reliable sister to Richie who always has his back no matter what. Harris plays the role to perfection as she’s constantly torn between what’s best for her and what’s best for her brother.  For maybe the first time, Becca is trying to better herself after getting accepted into med school. Her one hangup is that she doesn’t know if she can leave her brother. As Horwin’s Richie soon proves, no, she can’t. As the suicidal and depressed Richie, Horwin is excellent and steers the emotion of the film. The early comic bits are laugh-out-loud funny because of Horwin and the later dramatic scenes are unbelievably poignant given the performance. Matt Keyes even throws a cog into Richie and Becca’s relationship while also providing some tension and the film’s few thrills as well.

Even though Dead Dicks has a few issues with its tone, everything here is really, really good. Viewers will get absorbed into every scene and see how everything shakes out. The duo of Chris Bavota and Lee Paula Springer have put together something unique with the film but it just needs to have a more concrete direction. Instead, there’s some comedy here, a little horror there, and some drama thrown in top for good measure. Even the trailer seems to depict the film as more horror/thriller than anything. Again, Dead Dicks could’ve been any one of these things and would’ve been excellent no matter the direction. Instead, viewers get a little bit of everything which leads to a very entertaining romp regardless. With fewer and fewer movies being released at the moment, Dead Dicks is one that viewers looking for something different should definitely seek out.