Stop me if you’ve heard this before on Cinema Smack: Netflix makes good original programming. It has become a staple to comment on how the online streaming juggernaut is dominating home media at this point but it’s true. So far, they’ve seemingly done no wrong. The trend continues with Netflix’s newest addition to their feature length film library, ARQ.

What has been so good about their recent venture into features is that they have an independent film vibe. They haven’t been pumping out bombastic summer blockbusters or anything like that. Netflix has kept their projects small and story/character driven.

With ARQ, the focus is on a young man named Renton, or Ren for short, played by Robbie Amell. He awakes at 6:16 AM only to be restrained by raiders in his home. Along with Ren is his ex-girlfriend, Hannah (Rachael Taylor), who he has a complex history with. The intruders, Father, or Grimm, Brother, and Sonny, played by Grey Powell, Jacob Neayem, and Shaun Benson respectively, demand Ren’s currency, known in this film as “scrips.” An additional raider that broke in, Cuz (Adam Butcher), was killed after he touched a mysterious machine known as the ARQ.

As the film continues, Ren discovers that the ARQ has caught everyone in a time loop. Although, he is the only one immediately aware of it. Numerous scenarios play out as Ren and Hannah attempt to escape from their captors only to be killed off. After each time Ren is killed, he reawakens at 6:16 AM and he has another chance to foil the previous events. Eventually, the other characters catch on to the time loop and the two sides try to outsmart each other. Ultimately, Ren’s goal becomes to prevent the raiders from killing himself and Hannah and shutting the ARQ down to stop the time loops.

The best way to describe this film is that it’s Groundhog Day meets 12 Monkeys, Back to the Future, and the Bill and Ted series. While that’s certainly an odd combination of films, ARQ borrows smartly from all of them. The time loops immediately feel like the plot of Groundhog Day while the overall tone is more 12 Monkeys. The explanations and scheming between Ren and Hannah are similar to Back to the Future and Bill and Ted. The crazy thing about ARQ is that it balances all of these elements quite well. At first, some of the lingo is somewhat confusing but comes naturally after awhile.

The film is relatively short clocking in at just under 90 minutes which suits the concise nature of the story. Nearly the entire runtime is spent inside of Ren’s house with recurring events resulting in different outcomes. It keeps you on the edge of your seat while watching how Ren plans to outmaneuver the villains each time and how the advantage flipflops between the two sides. 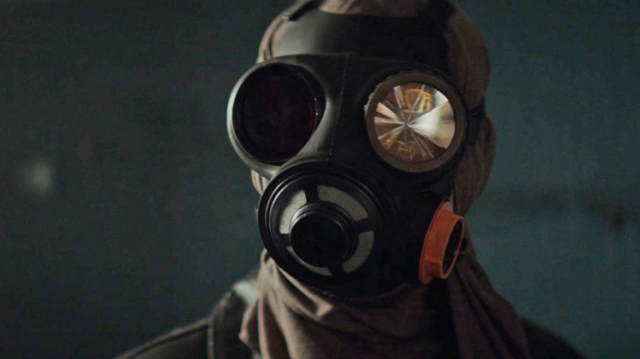 The smartest thing that ARQ does is embrace its limitations rather than try to exceed them. It’s not loaded with ugly looking CGI or other shoddy imagery. The events occurring in a war-torn world made small details like apples being a luxury important to the story. The film rarely leaves the confines of the house yet you know the world that these characters are challenged with. The acting itself is quite good and there aren’t any hokey or cringeworthy moments. Having a cast full of mostly television actors, as well as having a novice director in Tony Elliott, paid off. On top of that, it only had a $2 million shooting budget.

Overall, ARQ isn’t a game changer in the science fiction genre but it’s pretty darn good. When you add in the limited budget, the lack of a big name cast, and the confined set, it makes the film feel all the more impressive. As per usual, Netflix continues to up their game in home media and, if they continue to pump out this type of quality, it will certainly pay dividends. If you’re into science fiction, time travel, or simply into independent cinema, give ARQ a try. It won’t dazzle but it definitely won’t disappoint.