What is it about a depressing story that pulls in an audience? As many of you may already know, we love a good tragic drama here on Cinema Smack. There’s just a sense of desperation and realistic determination that other genres just can’t seem to replicate. A film like 21 Grams has long been a favorite and, frankly, there aren’t many that come close to the emotional impact that a film like that has. Yet, the duo of director Kornél Mondruczó and writer Kata Wéber may have found the right formula with their newest film. An adaptation of their stage play of the same name, Pieces of a Woman dropped on Netflix last week providing a look at a young couple that suffers through a nightmarish event and its self-destructive fallout.

The film begins with a young Boston couple preparing for the arrival of their first child. Sean (Shia LaBeouf) and Martha (Vanessa Kirby) have arranged an at-home birth with their midwife, Barbara, set to deliver their baby girl. However, Martha goes into labor and Barbara is unable to make it in time. Instead, a woman named Eva (Molly Parker) is sent to deliver the baby. From here, the happiest moment in Sean and Martha’s lives turns into tragedy starting a yearlong deconstruction of themselves and their relationship with each other and those closest to them.

In the past, we’ve discussed films like mother! and Hereditary which have largely focused on the complete psychological breakdown of the family unit and, specifically, a mother. While those two films are better fits as surreal horror films, Pieces of a Woman is an uncomfortable tale focused on drama and realism. Not only are Sean and Martha affected by their tragic event, but there’s a ripple effect that fractures the lives of so many others around them as well. There’s Martha’s mother, Elizabeth (Ellen Burstyn), who pushes for justice (or revenge, depending on your interpretation) as she urges the couple to seek compensation from unprepared midwife Eva. Martha’s relationship with her sister, Anita (Iliza Shlesinger), becomes basically nonexistent. Sean spirals out of control and falls back into past addictions with his and Martha’s relationship being emotionally shattered. Instead of properly grieving, he seeks solace in other less healthy ways. These are all understandable responses even if some are the wrong ones and all of these characters putting the pieces of their lives back together is the absolute crux of Mundruczó and Wéber’s film.

In saying that, it should be obvious that the acting throughout Pieces of a Woman is top notch. It wouldn’t be surprising to see a number of the cast members nominated for Oscars in certain categories. Ellen Burstyn feels like a shoo-in for Best Actress in a Supporting Role as Martha’s mother, Elizabeth. Even though she’s in at least one film almost every year, it feels like it’s been a while since Burstyn has really had an impactful role such as this. As Elizabeth, she balances the emotion of a heartbroken grandmother with being a tough mother as she urges Martha to find her voice on move on with her life. Elizabeth is a challenging character given her callous demeanor at times but her emotional breakdown in one of the scene’s most pivotal scenes shows off why Burstyn has become such a Hollywood mainstay over her 60 year career. Back in 2019, we said that Shia LaBeouf’s work on The Peanut Butter Falcon could be his best ever and, while we stick by that statement, the actor’s role as Sean is definitely right up there as well. As Sean, some of LaBeouf’s personal instability seems to leak through but it makes sense here. Sean is your average guy who has finally gotten his life together only to have it ripped away from him once again. During the promotion of the film, information came out regarding LaBeouf’s abusive relationship with his girlfriend FKA Twigs. While this is certainly upsetting, this review is only focusing on LaBeouf’s performance and not the events of his personal life at this time.

While everyone does a really great job in the film, including perhaps an underrated performance by Molly Parker as the scorned midwife, Eva, it’s Vanessa Kirby as Martha that steals the show. From early labor pains, to heartbreak, and all the way to her complete indifference and disregard for anyone or anything, Martha’s journey of understanding and acceptance is a constant battle. Again, the term “emotionally shattered” comes to mind because that’s exactly what she is. Kirby’s Martha is a broken woman that doesn’t know how to deal with the hand she’s been given. She’s lost in the world and shuts out anyone who’s ever cared for her. Much of the film is devoid of any happiness but during Martha’s moments of clarity, whether positive or negative, viewers will not be able to turn away from Kirby’s performance. Even during her sometimes cruel actions, it’s impossible to not sympathize with her even if she’s causing even more pain and anguish to her loved ones. At this point, Kirby seems a lock for awards consideration and with very good reason.

Another spot where Pieces of a Woman shines is in its technical achievements. The initial at-home birth scene that puts the plot into motion goes for nearly a half hour uncut. It’s shot almost like a stage play which, unsurprisingly, the film is based on. Characters move in and out of frame constantly when traveling from room to room before the camera catches up with them again moments later in a completely different action. This gives the film that semblance of realism that was previously mentioned. Everything the characters do feels natural. At one point in the film, Martha tells off another character offscreen. A minute later, you see this character walking outside through the large window that Martha’s standing in front of as she lashes out at her family members. In terms of filmmaking, this is such an unconventional approach but, again, when it comes to realism, this is how life would probably look if one was in this particular moment. On top of everything, the film is absolutely gorgeous to look at. The cinematography from Benjamin Loeb is sharp and the film is just shot so well. Every frame could double as a piece of still photography because it’s just that beautiful. In addition, the musical cues throughout the film are excellent as they often are integrated into the world of the film. It doesn’t hurt to have a legendary name like Howard Shore providing the compositions here either. 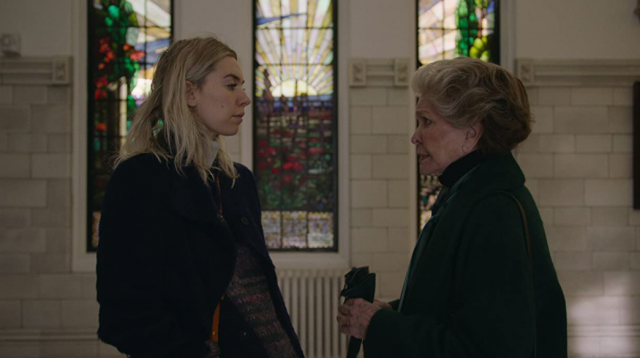 There’s not really much to criticize with the film but this wouldn’t be a proper review without a few nitpicks. Although satisfying overall, the film’s few issues are mostly with its ending. Without spoiling anything, there’s a courtroom scene towards the end that just feels a bit stagey and predictable. It’s not bad as there’s quite a touching moment in here but it just doesn’t seem to fit as much with the rest of the film’s overall tone. In similar fashion, Pieces of a Woman‘s final moments feel tacked on and unnecessary. After a very appropriate final scene, there’s an additional one that feels ambiguous. It’s information that the audience didn’t really need to complete Martha’s journey. While nothing here is poor quality, there just doesn’t seem to be a need for extra.

Nitpicks aside, Pieces of a Woman is a hell of a way to kick off 2021 especially heading into awards time. It’d be a shock not to see this film in contention at this year’s Academy Awards in at least some capacity. Between the performances, headlined by Vanessa Kirby, depressingly realistic subject matter, and some expertly crafted visual storytelling, Pieces of a Woman is a crippling drama that’s not to be forgotten. The painfully relatable story from Kata Wéber and expert direction from Kornél Mondruczó, is filmmaking at its best. In a year that should be loaded with quality film given the shutdown last year, Pieces of a Woman is the first real standout here in 2021.