We all know that the COVID-19 pandemic is all anyone is talking about around the globe right now. There’s no avoiding it as it has literally altered our way of living. In that respect, there’s no doubt that films and television will eventually capitalize on such a global event. What if there’s a film out there that already resonates with the current pandemic though? Many people will probably turn to the 2011 Steven Soderbergh film, Contagion, but that’s not the one we’re talking about. No, the film we’re talking about is brand new as it just hit Netflix last week. Galder Gaztelu-Urrutia’s feature length debut, The Platform, isn’t centered on the coronavirus but its message and critique of social class structure is a relevant topic in these dire times we find ourselves in.

Gaztelu-Urrutia’s filmography is kind of interesting with only two other credits for directing per IMDb.com. Spending most of his time as a producer, he co-directed the short film 913 with Félix Guede in 2004 and another short entitled The House on the Lake in 2011. For this new film, Gaztelu-Urrutia adapts a screenplay from David Desola and Pedro Rivero. The Platform premiered at the 2019 Toronto International Film Festival and nabbed the People’s Choice Award for Midnight Madness. The award goes to the most popular cult or underground film at the festival with past winners being films like The Raid, Seven Psychopaths, Hardcore Henry, and Free Fire.

The Platform opens with a man named Goreng (Ivan Massagué) waking in a concrete cell with one other prisoner. There’s a large rectangular hole in both the floor and the ceiling where other inmates can be seen. Goreng’s cellmate, Trimagasi (Zorion Eguileor), claims that their cell, 48, isn’t too bad as a concrete platform is lowered with a ravaged spread of food for them to eat. The platform stays for two minutes before descending to the next level of the prison. In the allotted time, each prisoner is allowed to eat their fill but the room will either heat or cool if anyone keeps food for later after the platform descends. The lower cells only get whatever food is left from all of the ones above so the higher the cell, the better. At the end of each month, the prisoners are moved to a new cell until they finish their sentence. In addition, each prisoner is allowed to bring one item into the prison with them. As Goreng serves his sentence and experiences life on various levels, he realizes that there’s something fundamentally wrong about the prison known as “The Pit” and he intends to do something about it.

On paper, the plot of the film seems kind of dense but, in reality, it’s not. The film does well to establish its rules early on and it abides by them very well. The introductory scenes explain the rules, show how they play into the story, and all return at crucial moments in the story. There are a lot of films that have a bit too much explanation and then no followup but that’s not the case with The Platform. Every detail matters and is revisited at some point. Initially, the premise of the film seems to be about survival and, in large part it is, but it also becomes something more as it progresses. It’s a rare feat in a horror film to almost cause the audience to forget about the genre and think more about the message but Gaztelu-Urrutia and company accomplish that here. More about that soon. 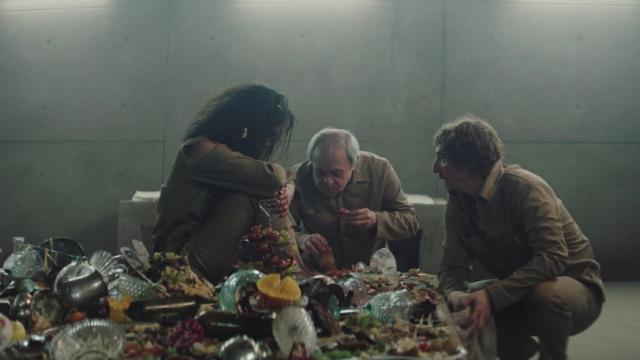 The cast of the film really does a great job considering the fact that viewers learn very little about them and their backstories. Ivan Massagué’s Goreng is our protagonist who voluntarily enters The Pit in exchange for a diploma. He’s clearly out of his element as he doesn’t understand the criminal mind and is forced to find a way to survive the horrors of the prison. Massagué is believable in the role and feels like an every-man you can root for. He often comes across a woman named Miharu (Alexandra Masangkay) who rides the platform in search of her son who’s said to be somewhere within the prison. There’s something unexplained that draws the two to one another but it works in the context of the film. Zorion Eguileor as Trimagasi is perhaps the standout of The Platform. His oddly comedic, yet sinister, delivery and his greedy, self-centered mentality provides an opposite outlook from Goreng. Even characters with less screen time, such as Antonia San Juan’s Imoguiri and Emilio Buale’s Baharat, serve a purpose and have different types of relationships with Goreng as he makes his way through The Pit.

However, the real highlight of The Platform is in its overall message. For this, we’re not going to spoil anything that happens in the film but we’re going to discuss what we took away from it at the end. If you want to experience everything the film has to offer for yourself, skip this paragraph and the next. Ultimately, the film is a perfect metaphor for the day and age we live in. It’s especially relevant now given the amounts of hoarding that’s been going on in the United States since the coronavirus outbreak. Just like people scrambling to buy up every roll of toilet paper and perishable food item, Trimagasi stuffs his face and eats everything he can get his hands on with no regard for the prisoners below him. Goreng questions this from the beginning but Trimagasi and the other prisoners insist on it being every man for himself.

The most fortunate people in society always appear to be set while the grunts at the bottom struggle and scrounge for everything they have. While the prisoners on level 1 eat like kings, those at the bottom of The Pit are left with nothing. Even now, there are companies that are having their management work from the comfort of their homes while forcing the manual labor to punch a clock in work conditions not suited for the spread of the current virus. Then, there are people in the service industry who are going jobless at this time with little relief to speak of as of this writing. No, this review isn’t a political statement or even a knock on businesses. It’s just crazy to think that a film this relevant is hitting the public at this exact time. Premiering back in September at TIFF, The Platform certainly wasn’t developed or filmed during the outbreak. This is a perfect example of right time, right place in terms of cultural and global relevance. 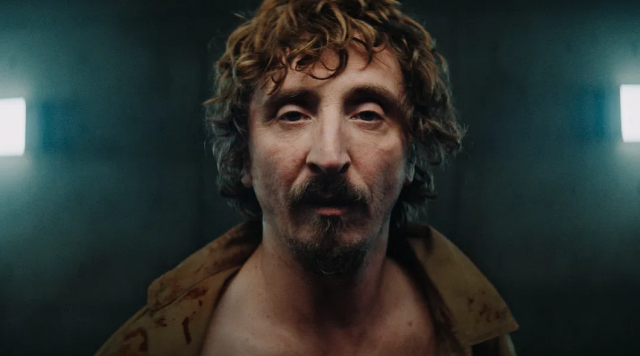 When it comes to the horror aspect of The Platform, there’s plenty to like as well. While it’s not what you’d call a “scary movie” by any means, there are some chilling situations that Goreng must deal with. His relationship with Trimagasi is uneasy from the get-go due to their polar differences. Though they’re able to strike up a friendship, you never feel entirely certain that Trimagasi can be trusted. As the film continues, there’s some solid gore that will definitely please some horror fans but turn off more casual ones. The depictions of violence are treated realistically for a raw and unflinching look at class struggle and overall survival. The characters commit some atrocious acts at times and it’s always compelling to see how far each of them will go.

There’s not much else to say about The Platform in general. It’s a brutal and bloody affair that’s also surprisingly relevant. There aren’t really any negative aspects of the film other than the fact that it will definitely shy some people away with some of its taboos. Also, it should be known that it’s a foreign film so the dialogue is all in Spanish. That will be a turnoff for some people event though it really shouldn’t be. Overall, The Platform is just a really well put together piece of dramatic science fiction/horror cinema that was released at the most opportune moment. With something as sound as this, it makes you wonder why Galder Gaztelu-Urrutia hasn’t been a consistent name within the Spanish filmmaking community. Hopefully, with the success of this film, Gaztelu-Urrutia will get more opportunities to prove his talent in the near future.