Last year, we reviewed the feature film debut from writer/director Alex Magaña called 29 to Life. Our impression of it was that it was a charming and nicely made piece of independent cinema that, at times, was unfunny and featured an iffy main character. However, its carefree nature and relevant message made it a worthwhile watch from a promising filmmaker. This year, Magaña returns to some familiar territory with another lively and innocent production in the form of his rom-com anthology, What Love Looks Like.

The film follows five different groups of people in various stages of their romantic relationships. Nicole (Kate Durocher) can’t seem to get any attention from her cell phone addicted boyfriend, Owen (Josh Gilmer), and starts to look for it elsewhere. Both Summer (Jamie Shelnitz) and Calvin (Connor Wilkins) have had poor luck finding the right match so they each try their luck on a blind dating app. Coming off a personal tragedy, Sam (Nathan Kohnen) has trouble moving on but establishes a friendly relationship with Evie (Ashley Rose McKenna) over a peanut butter and jelly sandwich. Theodore (Jack Menzies) is infatuated with a shy girl named Bailey (Ana Ming Bostwick-Singer) at the park and continuously fumbles his chances with her. Similarly, Finn (Kyle Meck) is smitten with Penelope (Taylor Alexa Frank) but has the worst timing when it comes to wooing her.

First and foremost, What Love Looks Like is basically romantic fluff. If you’re looking for something emotionally heavy or romantic, you probably won’t find that here. What Magaña is best at is keeping a lighthearted and fun tone and that’s exactly what the film is. Sure, some of the couples have issues but nothing as raw as, say, Marriage Story or Blue Valentine. This film looks at the lighter and inspirational side of things. Viewers are meant to want to see these couples find happiness with each other and live happily ever after. Magaña’s 29 to Life had the same kind of feel despite some real issues at its core. Instead of having a deep and unique message, both films feel like they’re trying to spread happiness to viewers above all else. In that regard, the film is a success. Magaña does a good job ensuring that each couple has their own positive story to tell even though some are better than others. 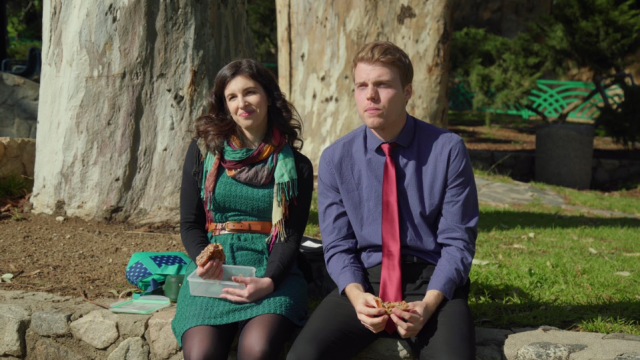 The technical aspects of the film also aid in remaining cheery. The cinematography and camerawork is top notch throughout. The color palette is bright and vibrant and all of the shots are sharp. Most of the scenes take place in generic, everyday locations such as apartments, parks, and stores but never feel uninspired. These kinds of locations help drop the production cost and sometimes appear cheap on film. Luckily, that’s not the case with What Love Looks Like. Though the film doesn’t have any locations that are particularly unique, everything looks good and the shots are clean. In addition, the film is littered from top to bottom with music. This is something of a positive and a negative. The music keeps with the light and fluffy tone and usually fits the scenes but there’s just so much of it. Every single scene has music and it changes in each of them too. Music is a huge part of filmmaking but too much of it can also be detrimental.

The characters throughout the film are something of a mixed bag. For the most part, all of the cast members do a solid job and there’s no one who sticks out as being laughably bad. Kate Durocher and Josh Gilmer are constantly fun to watch as Nicole and Owen thanks in large part to Owen’s unhealthy addiction to his phone. After a while, it’s hard not to chuckle as he plugs away on it in nearly every scene. Nathan Kohnen and Ashley Rose McKenna as Sam and Evie have a nice little story centering on grief and loss while trying to move on in life. The best storyline, though, belongs to Jamie Shelnitz and Connor Wilkins as Summer and Calvin. They don’t spend a lot of time onscreen together but are able to build chemistry in a realistically modern way. Dating isn’t what it once was as people spend a lot of time texting each other instead of spending time together face to face. Their story is a perfect representation of this. The couples of Finn/Penelope and Theodore/Bailey have similar tales which don’t get a ton of time to shine. Finn and Penelope probably have the least amount of buildup while Theodore and Bailey’s relationship is just awkward and weird most of the time. This isn’t the fault of the talent involved. It just feels like there wasn’t enough for them to do in the final script. 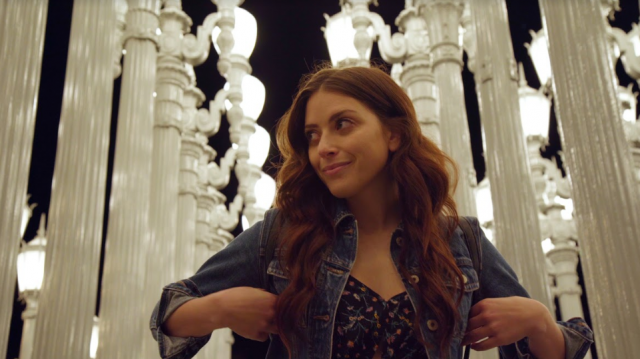 The biggest problems with the film are actually quite reminiscent of some of our issues with Magaña’s previous feature. The script is loaded with cliches and some occasional odd banter. There are a lot of moments where you have to roll your eyes and/or cringe at some of the dialogue. Again, the film lives and dies by its fluff but some of it is just too much. Additionally, there are far too many unfunny jokes. The characters seem to be written as somewhat witty but it just doesn’t work in some cases. Yet, the biggest problem with What Love Looks Like is its lack of an overall plot. There aren’t any overarching connections other than couples supposedly finding love. Too often the romance feels more fleeting than true love. The anthology style along with so many characters doesn’t help this either. Viewers are mainly just watching people meet and form attractions to one another. There are no ups and downs, major issues to overcome, or even lessons learned between the couples. It feels more like a series of sketches as opposed to a feature length film.

Even with these negatives, Alex Magaña is still able to keep viewers invested enough because of his talents as a filmmaker and his consistency. He seems drawn to heartwarming stories and obviously has fun bringing them to life onscreen. His penchant for fluff may not sit well with everyone but some people like simple, happy stories. If nothing else, What Love Looks Like is certainly that. Almost everyone perseveres, gets what they want, and, presumably, has a happy ending. We still can’t overlook some of the issues though. The film focuses too much on newly budding relationships where, as an anthology, it may have been better to focus on relationships in all different stages. The dialogue and jokes are simply bad at times and they lack believability. People just don’t talk like this. That being said, there’s still enough good here and Magaña proves himself capable of creating a fun feature length film once again.

*What Love Looks Like is currently available to rent or purchase on video-on-demand sites like Amazon Prime. It’s also available to stream for free for Prime members at this location. Check out the trailer below.*