There’s no doubt that the United States is at something of a crossroads in 2020. People are upset and feel misguided by their government through tumultuous times and there’s certainly grounds for some kind of uprising with the way things currently are. That being said, writer/director Aaron Sorkin couldn’t have been any more timely with the release of his dramatization of the violent protests during the 1968 Democratic National Convention in Chicago. Last week, Netflix released The Trial of the Chicago 7 for streaming. With its amazing ensemble cast and, of course, its political relevance, the film is easily one of the standout titles of the year and a shoe-in for recognition come awards season.

Sorkin has been a mainstay in Hollywood for nearly thirty years since making his screenwriting debut with 1992’s A Few Good Men which was adapted from his 1989 Broadway play of the same name. From there, he went on to create the television shows, Sports Night, which ran for two seasons and his bigger claim to fame, The West Wing, which ran for seven. More recently, Sorkin has found a lot of success in feature length films. He won an Academy Award for Best Adapted Screenplay for The Social Network while nabbing two more nominations in the same category for Moneyball and Molly’s Game. The latter was also Sorkin’s first go-round as a director. As for Sorkin’s newest effort, the film was originally scheduled to be released theatrically. Due to the COVID-19 pandemic, Paramount Pictures sold the distribution rights to Netflix which made the film available to stream on October 16th.

The Trial of the Chicago 7 centers on the real-life riots that occurred during the 1968 Democratic National Convention. The film opens in August 1968 where eight men from a handful of organizations prepare to travel to Chicago to peacefully protest the DNC. Among them are Tom Hayden (Eddie Redmayne) and Rennie Davis (Alex Sharp) of the Students for a Democratic Society, founding members of the Youth International Party, Abbie Hoffman (Sacha Baron Cohen) and Jerry Rubin (Jeremy Strong), leader of the National Mobilization Committee to End the War in Vietnam, David Dellinger (John Carroll Lynch), Lee Weiner (Noah Robbins), John Froines (Daniel Flaherty), and co-founder of the Black Panther party, Bobby Seale (Yahya Abdul-Mateen II). Five months later, all eight men are arrested for inciting a riot. From here, it’s up to them and their attorneys, William Kunstler (Mark Rylance) and Leonard Weinglass (Ben Shenkman), to fight back against straight laced prosecutor Richard Schultz (Joseph Gordon-Levitt) and questionable Judge Julius Hoffman (Frank Langella) to clear their names.

To go any more in depth with the plot would be doing it a disservice. With so many characters, opinions, and moving parts, there’s no way to cover everything going on in this film in one paragraph. Ultimately, the Chicago 7, as they’re known, along with ancillary defendant, Bobby Seale, must plead their case to show that they weren’t trying to incite a riot. As a courtroom drama, the film is relatively standard and goes through a lot of the beats you’d expect. The odds are stacked against the defendants as the trial is deemed to be political in nature. However, it’s the masterful storytelling from Sorkin that makes The Trial of the Chicago 7 unique. As the film continues, events from the protests and subsequent riots are shown as they become relevant to the case. As a viewer, you go into the trial as if you’re one of the jurors. The film presents the facts and details while you’re left to decide who’s truly to blame for the violent uprising. 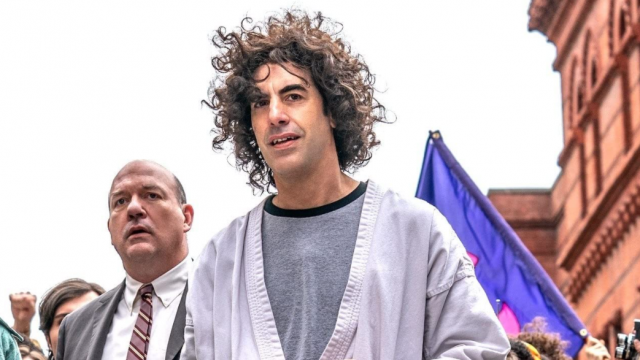 What stands initially about the film is its amazing ensemble cast. When you have a lot of name talent attached to a project, it’s pretty normal for the superstars to get the bulk of the screen time. With The Trial of the Chicago 7, there aren’t necessarily any superstars and the big players in the trial each get ample screen time. Leading the charge are Eddie Redmayne, Alex Sharp, Sacha Baron Cohen, and Jeremy Strong. Much of the story is focused on their interactions, disagreements, and ideals about the protests while Mark Rylance’s William Kunstler is there to point out the ineptitude of the judge and the sideshow nature of the trial. Joseph Gordon-Levitt gives a solid, if intentionally unspectacular, performance as the prosecuting attorney Richard Schultz who’s torn between his superiors and his moral obligation to his country and its people. Even Michael Keaton shows up and shines in one of the film’s most revelatory scenes.

If we had to pick the standouts of the film, there are three names that immediately come to mind. Sacha Baron Cohen, Jeremy Strong, and Yahya Abdul-Mateen II as Abbie Hoffman, Jerry Rubin, and Bobby Seale respectively. With his claim to fame being characters like Ali G, Borat, and Bruno, funnyman Sacha Baron Cohen isn’t always recognized for his serious acting chops. Even his roles in other films tend to be more fantastical and over-the-top. Here though, Cohen proves himself a legitimate actor as Abbie Hoffman. He injects some of the humor and wittiness he’s known for into the character but also creates a much deeper character who fights for ideas he feels should be heard. Jeremy Strong as Abbie’s cohort, the lovably defiant burnout Jerry Rubin, is also fantastic. The team of Strong and Cohen brings levity to the film but also plenty of seriousness, understanding, and surprisingly human moments when need be. Finally, there’s Yahya Abdul-Mateen II as Black Panther Bobby Seale. The real-life Seale had almost nothing to do with the Chicago 7 and the treatment the character suffers is shocking to say the least. Abdul-Mateen’s performance as Bobby Seale is a reminder of some of the injustice suffered by African-Americans today which ultimately resulted in the Black Lives Matter movement. 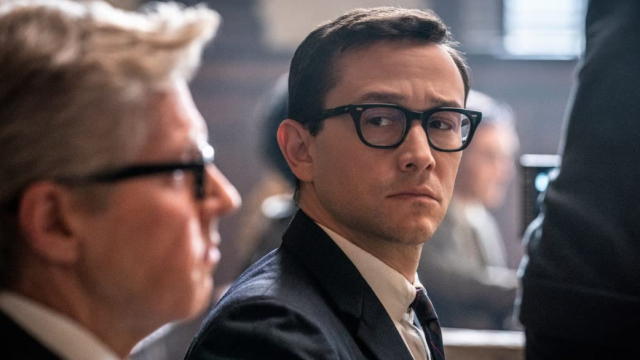 With this, the real story of The Trial of the Chicago 7, is its correlation to today’s world. With a country at odds and a possibly historic presidential election just around the corner, it’s depressing to think that we really haven’t come all that far since 1968. Once again, Americans are plagued by civil unrest and their outcries are falling on deaf ears. With two government parties that are more concerned with warring against each other than helping and leading the country’s people and riots and protests already breaking out across the country here in 2020, there’s seemingly no end in sight. We’re not going to delve any further into politics (after all, this is a movie review) but the similarities to today simply can’t be ignored. Maybe looking at our past can help the United States move towards a better future.

Not only is Aaron Sorkin’s The Trial of the Chicago 7 a damn fine film but it’s also an overwhelmingly relevant one. Sure, there are some minor issues with the film such as some lengthy time jumps and the disappearance, albeit understandable, of Bobby Seale partway through the film. Yet, it’s hard to get down on a film so well made, acted, and with such impeccable timeliness. Though much of the protesting stemmed from the Vietnam War in 1968, it was still about the the US citizens being sent to fight in a war many didn’t believe in. While we’re not necessarily in the midst of wartime in 2020, the issues crippling the country are, again, related to its people. Perhaps unsurprisingly, this is the very sentiment that Sorkin captures in The Trial of the Chicago 7. At the end of the day, it’s the people that need to be taken care of and Sorkin’s version of events spotlight this perfectly.