At this point, we are truly in the Golden Age of Television. There’s no doubt about it. Seemingly every week there’s a new show to talk incessantly about. We’ve done more television wrap-ups in the first six months of 2017 than all of 2016 and we haven’t even gotten to some of the most anticipated shows of the year yet. Though, we’re about to revisit a show that cracked Cinema Smack’s Best of 2016 list with Orange is the New Black Season 5.

The ending of Season 4 left the all-female Litchfield Penitentiary in dire straits as a riot broke out among the prisoners. The final moments showed Daya (Dascha Polanco) pick up a correctional officer’s gun and point it at him. Season 5 wastes no time as it picks up at the same moment. Daya shoots the despicable CO Humphrey (Michael Torpey) in the leg as the other inmates urge her to kill him. From here, the inmates literally run the proverbial asylum as they take the rest of the guards, and even warden Joe Caputo (Nick Sandow) hostage.

Oddly enough, series protagonist, Piper Chapman (Taylor Schilling), and her on-again, off-again girlfriend, Alex Vause (Laura Prepon) take a slight backseat in this season. That’s not to say that they’re no longer prominently featured. It’s just that so many of the show’s other characters really step up their game and have bigger roles. Characters like Taystee Jefferson (Danielle Brooks), Gloria Mendoza (Selenis Leyva), Black Cindy (Adrienne C. Moore), and Frieda Berlin (Dale Soules) make the most of their increased screen time and become bigger pieces to the collective puzzle.

Like Season 4, Orange is the New Black Season 5 continues the show’s trend towards more dramatic situations. Of course, it maintains its witty dialogue and cutesy moments between characters. There are plenty of dark moments in this season as well though. In particular, the scenes with CO Piscatella (Brad William Henke) stalking and kidnapping a number of inmates borderlines on pure horror. You’re unaware of his intentions and truly fear for some of the show’s most popular characters. 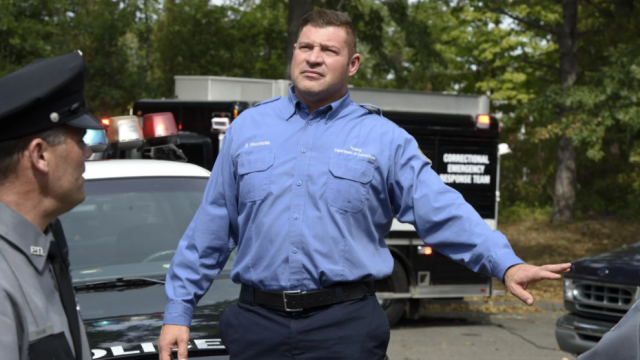 When the initial riot breaks out at the end of Season 4, one would assume that the issue will be resolved somehow in Season 5. Surprisingly, the entire season takes place during the riot. The inmates establish their own forms of justice and guidelines to follow while coexisting with one another. They appear united initially but, over the course of the season, new friends and enemies are made among the characters. Some of the inmates approve of the chaotic nature and power behind the riot. Others attempt to sit it out peacefully until a resolution is reached instead.

The series has always boasted good hearted, yet flawed, characters and many of them are certainly at the forefront here. The interactions between inmates and guards has always been important in the show and still holds true in Season 5. With the roles reversed, it’s interesting to see how some of the individual inmates deal with their hostages. Some see them as part of a broken system while others see them as the people that they are. Specifically, in the latter half of the season, Taystee negotiates with Caputo and the former warden, Natalie Figueroa (Alysia Reiner), on their demands and justice for their friend, Poussey. This storyline does an excellent job of breaking down both sides of the conflict. Instead of that one side has all of the power, it feels like a discussion of human rights and decency. 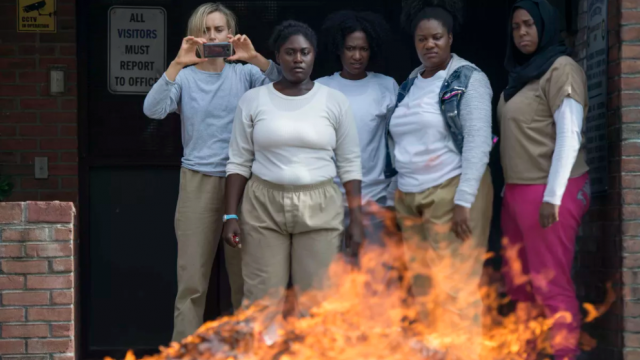 With all of the darker moments, the show still offers a lot of heart. There may not be as much joy to be had in these last two seasons. Yet, it’s not all grim either. There’s an especially touching scene where Soso (Kimiko Glenn) constructs a memorial library to the memory of her late girlfriend. In this one scene, all of the inmates forget about their own issues and enjoy the moment together. On top of that, the backstories of some of the characters are expanded upon. They definitely add to the trials and tribulations that the inmates go through. The flashbacks help viewers to understand the current conflicts of characters like Daya, Frieda, and Red (Kate Mulgrew). They also show their overall humanity. The show has always had these flashbacks but it’s astounding how the showrunners continue to find ways to develop their already established characters.

In typical fashion, Orange is the New Black Season 5 is as binge-worthy as ever. Every episode offers important events and it never feels like it’s meandering. Again, it’s impressive that the show was able to produce an incredibly entertaining season set completely during the riot. Where anything and everything could potentially happen, the majority of the characters maintain dignity by remaining civilized throughout the events. Judging by the ending of Season 5, the show could honestly go anywhere once again. The fate of some of the longest running characters is still to be determined and it’s unknown as to what becomes of Litchfield. All that’s certain is that Orange is the New Black Season 5 is another fantastic entry to one of the most entertaining shows around.